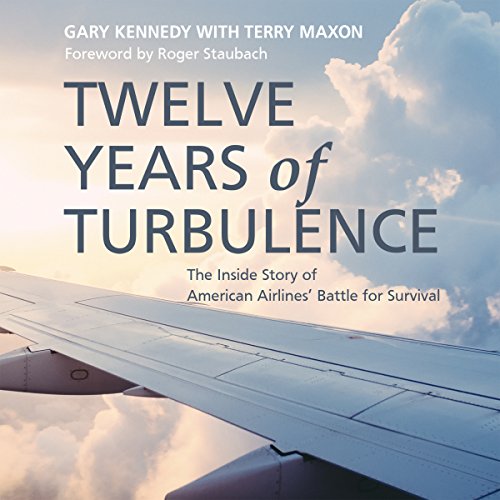 The inside story of crisis and turmoil at American Airlines during the 12 years following the terrorist attacks of 9/11.

In the twelve years following 9/11, American Airlines lost billions of dollars and endured years of crisis and turmoil. Financial upheaval, the crash of Flight 587, grueling confrontations with labor, a rival’s push to acquire the company, and a challenging fight with the government tested the mettle and fortitude of its top executives. Against all odds, American found a way to save what was once the world’s largest airline from certain ruin.

Told through the eyes of American’s chief lawyer, this insider’s story of intrigue of the unfolding events is set against a personal look at the innermost workings of the sexiest industry in the world.

What listeners say about Twelve Years of Turbulence

As an American Airlines employee, it is very interesting to hear a former member of managements prospect on how things unfolded.

This story gives one insight into the complex details in running an airline. It takes tremendous commitment, energy, and intelligence to address all the aspects and pieces that ultimately provide someone to fly from point A to point B.
There is no doubt that this period of time was a major challenge for the airline industry, however Mr. Kennedy tends to portray American Airlines as always being in the victim position. Labor gets portrayed as the ignorant adversary and management as wearing the white hats just trying to salvage the company. I find gaps in the story regarding what management could have done differently or what they might have considered, or correcting errors in judgement/decisions. I find management vs. labor to be a destructive, costly way of doing business. And why didn't you file bankruptcy earlier after 9/11 like the other airlines did in order to survive? It must have been humbling to end up surviving by having a much smaller airline come in to save the day.

not worth the time , unless you can get over the sound recording , which sounded like it was recorded in someones garage . it was horrible

Sound was a big no go for me

The story is at times hard to follow, especially for those unfamiliar with the legal jargon, but overall interesting perspective from inside one of the largest mergers in American history. the biggest downfall for this audio book was the recording. It sounds like it was recorded on an iPhone in a tin shed. Some chapters are better than others, but all are still pretty bad.

Really expected more. Very clear this comes from a management point of view. Little regard for the employees of American in my view. A lot of time spent justifying how great of a job American management did, except for the whole labor mess and Bankruptcy. Disdain for unions apparent. Authors attempts at levity lacking. Reading was poor, tough to listen to.

I found it fascinating and I’m not even in the airline industry. My only gripe is it sounds like it was recorded in a tin box. I basically listen to audible all day and this was the worst recording I’ve heard in a while.