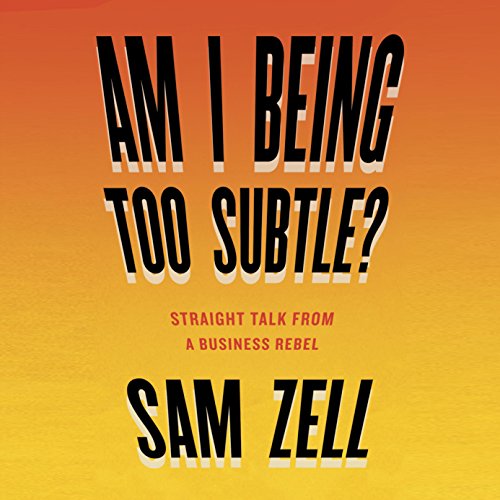 Am I Being Too Subtle?

The traits that make Sam Zell one of the world's most successful entrepreneurs also make him one of the most surprising, enigmatic, and entertaining mavericks in American business.

Self-made billionaire Sam Zell consistently sees what others don't. From finding a market for overpriced Playboy magazines among his junior high classmates, to buying real estate on the cheap after a market crash, to investing in often unglamorous industries with long-term value, Zell acts boldly on supply and demand trends to grab the first-mover advantage. And he can find opportunity virtually anywhere - from an arcane piece of legislation to a desert meeting in Abu Dhabi.

"If everyone is going left, look right," Zell often says. To him, conventional wisdom is nothing but a reference point. Year after year, deal after deal, he shuts out the noise of the crowd, gathers as much information as possible, then trusts his own instincts. He credits much of his independent thinking to his parents, who were Jewish refugees from World War II.

Talk to any two people and you might get wild swings in their descriptions of Zell. A media firestorm ensued when the Tribune Company went into bankruptcy a year after he agreed to steward the enterprise. At the same time, his razor-sharp instincts are legendary on Wall Street, and he has sponsored over a dozen IPOs. He's known as the Grave Dancer for his strategy of targeting troubled assets, yet he's created thousands of jobs. Within his own organization, he has an inordinate number of employees at every level who are fiercely loyal and have worked for him for decades.

Zell's got a big personality; he is often contrarian, blunt, and irreverent, and always curious and hardworking. This is the guy who started wearing jeans to work in the 1960s, when offices were a sea of gray suits. He's the guy who told The Wall Street Journal in 1985, "If it ain't fun, we don't do it." He rides motorcycles with his friends, the Zell's Angels, around the world and he keeps ducks on the deck outside his office.

As he writes: "I simply don't buy into many of the made-up rules of social convention. The bottom line is: If you're really good at what you do, you have the freedom to be who you really are."

Am I Being Too Subtle? - a reference to Zell's favorite way to underscore a point - takes listeners on a ride across his business terrain, sharing with honesty and humor stories of the times he got it right, when he didn't, and most important, what he learned in the process.

This is an indispensable guide for the next generation of disrupters, entrepreneurs, and investors.

"The notoriously blunt businessman shares the ups and downs of his career and the lessons he’s learned in business - with just a little profanity - in a new book, Am I Being Too Subtle?" (The Wall Street Journal)

"Here we have the real Sam Zell: one of our nation’s most interesting, provocative, and successful practitioners of business and life. He’s a wise man who hates fuzzy thinking. He is a biker, wearer of leathers and jeans and boots and his signature quirky beard. He points his skis straight downhill. You know, all the usual things that the few really smart (but not too smart for their own good) business people do." (Steve Roth, chairman and CEO of Vornado Realty Trust)

"A highly readable and revealingly personal book filled with unique insights and unvarnished straight talk about business, people - their quirks and potentials - and about life itself." (The Huffington Post)

What listeners say about Am I Being Too Subtle?

I am grateful that Sam Zell decided to share his thoughts, lessons learned, principles he uses in decision making and also a remarkable story of his family that put things in perspective. It’s worth listen I enjoyed it and will like listen again in the future,

This is one of the greatest business books out there

I’m so grateful to have come across this book. Sam is a masterful story teller and business titan. A titan though who rides motorcycles, hates wearing suits and fosters ducks in the office!!!! The man is a living legend.
Can not recommend this book enough.

One of the best books I have ever read

I would recommend this book! It’s worth reading. Sam has a great way of simplifying things. My biggest take from the book was about risk and how Sam Zell assesses it! Keep your downside limited and know your risk!

An interesting biography of a great brain and eye to spot an opportunity. Sam Zell shows the benefits of a 'can do' attitude, the importance of understanding the mindset of the other side and how first mover advantage can bring massive gains.

Interesting read/listen about a man who was involved in business at incredible levels. Inspiring but also full of ideas to implement into your business life.

As a successful fellow entrepreneur the fundamentals you preach will stay constant for eternity. I listened to the whole book in 2 days.
What a wonderful humbling story from beginning to end. Thank you for sharing it with the world. Lord William Haughey.

I’d never heard of Sam until I saw an interview he gave on Bloomberg. He was very improbably dressed for a rich man was my first impression. The interview clearly showed his intellect when it came to business matters and his very deep knowledge. I then heard some of his other broadcasts on YouTube and I became a fan. This book has reinforced my opinion of him as being a business genius and I don’t say this lightly. A must read for anyone aspiring to be successful in business. Full of very deep insights that anyone can apply in their own business life.

I usually choose books that have some bad reviews. I don't think there's a perfect book send that one book has everything. this is an insight into one man's life and his thinking. I liked it but I did find it hard to focus in the beginning because of the hoarse voice. However, the message is much more important then the clarity of the voice and Zell has a lot to share of how he sees things and what matters to him.

Sidenote
I like that he build "the bridge" while others were trying to build the wall.

One of the best there is

Second time reading it, no doubt there will be a third!! Very informative book with simplicity of investing

This is best book I've read...

If you could sum up Am I Being Too Subtle? in three words, what would they be?

What was one of the most memorable moments of Am I Being Too Subtle??

The early chapters on Mr. Zell's parents, including their escape from Poland, are important and fascinating.

Mr. Zell has many fine qualities. A good, or even mediocre, speaking voice is not one of them. He should have chosen someone else - anyone else - to narrate the book.

Many fine moments. Hard to pick one.

I recommend you buy the book in other than audible form.

Gave me a new, actionable perspective

Mr. Zell's contrarian, gritty, creative, high EQ way of doing business has changed the way I think about existing and prospective ventures. From strategy through execution and culture building. Everyone should read this book, multiple times.

absolutely love this book, one of my favorites. have listened to it several times, & will certainly listen to it more.

Required reading for all business adventurers

I’ve followed Sam Zell for almost thirty years - he was one of the people that inspired my adventures in real estate. His book is a gift to anyone that doesn’t find themselves fitting in to corporate society, to anyone who loves business and simply to everyone who has difficulty understanding that opportunity is everywhere.
Am I biased? Sure. But the fact is that this book doesn’t disappoint and I only wish I had it when I got started on my real estate journey.

Sam Zell reads his own book

Amazing to hear from the actual icon reading his own book. The stuff this guy has done has literally moved nations

Adventure into the mind of a jeans wearing Mogal.

Finally a book from a business mogal that isn't going to tell you,"It's the suite, that makes a man." Or one of the other many parables that's so stuffy and uniform. - To be at the top of your game you must be 100% and Sam Zell helps guide you through how he discovered himself.

some good lessons to be learned.

Some good lessons but stuffed with personal stories which are and relevant. Over all I enjoyed it

Sam’s book was absolutely amazing I love that he read it himself and when it was over it’s like having a friend leave after a wonderful vacation together! Sounds like he invented business casual and lack of corporate bureaucracy! I love that he cuts everybody in on the deals they’re doing so that everyone’s running in the same direction genius!

I had read a bit on Sam Zell's exploits in a favorite print book, The Vulture Investors by Hillary Rosenberg. But his own voice here marks him as a lucid explainer, a natural teacher. In situation after situation his thinking (as it translated into deals) is laid out with bracing simplicity and clarity. I was never raised to be aware at the crucial age of this sort of thinking, and I'm not sure I would have had the courage to commit the capital .But these deals each bring a huge smile to my face. There was SO much low-hanging fruit in the 70s, 80s and beyond, at least in retrospect. The trick of course and the mark of genius was in figuring it out prospectively, back then. The telling is great here, as he holds up the angles that were attractive (and that multitudes of others were not seeing). People were just handing him value at amazing discounts. My family (and I later) sort of semi-lucked into some fairly good real estate buys at good times. But the scale of this is amazing. He is lighthearted in his tales too. I can't recommend this one enough.

The author has a bit of an unconventional approach to business and life that I really enjoyed. I got a lot of practical information out of this and thought it was useful and inspirational.

Wasn't a big fan of the author's voice at first, but you get used to it rather quickly. Excellent use of stories to illustrate points.