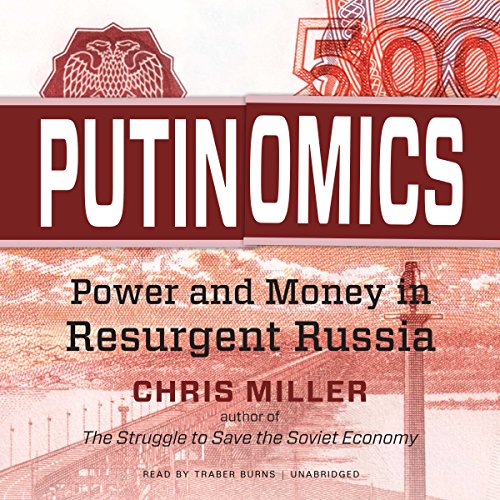 By: Chris Miller
Narrated by: Traber Burns
Try for £0.00

In Putinomics, Chris Miller examines the making of Russian economic policy since Vladimir Putin took power in 1999. Miller argues that despite Russia's corruption, cronyism, territorial expropriation, and over-dependency on oil as an economic driver, Putin's economic strategy has functioned far more effectively than most Westerners realize. While acknowledging that part of Putin's successes - above all, quadrupling per capita GDP in just a decade and a half - can be attributed to cashing in on high oil prices, Miller details the government policies that have also been fundamental to Russia's growth, which has outpaced and outperformed comparable petro-states like Venezuela and Saudi Arabia.

While many scholars have long agreed that Russia has combined reasonably successful macroeconomic policies with mediocre micro policies, Miller argues that this dichotomy has not seeped very far into public debate. Thus, Putinomics at once analyzes Russia's political economy in a way that nonspecialists can comprehend and complicates our understanding of contemporary Russia.

What listeners say about Putinomics

Interesting listening, whilst it does not cover more recent events it provides a good overview of Russia’s history since the 90s

Now that Putin is public enemy number one, it is hard to remember that there were better times, when we all felt more or less sympathetic and hopeful that Russia would choose the path towards normal happy statehood, and a normal happy relationship with the West. Russia had massive challenges and massive advantages, and it could have gone well...

Chris Miller gives a detailed account of the Russian economy (1991-2017) unadorned with normative judgements. He really examines Russia's political economy like a doctor would examine a body or an engineer would examine a motor, and it is satisfying not to be burdened with too many moral judgements.

Of course, history has taken a definitive turn since this book was published so it's all a bit moot now, but I found it interesting to look at the back-story. Better than watching too much live news.

Listened to this over a few nights. Sent me to sleep every time. The narrators voice is all wrong …..

The Russian ganster economy of the 1990's evolves into the golden era of the early 2000's under Putin. Putin succeeds in controlling the oligarchs by imprisoning one or two examples and forbids political influence. A fortunate coincidence of events up to 2010, including high oil prices, buoys the economy and allows citizens wealth to increase by 10% pa in this period with improved pensions, bonuses for war veterans, public servants but industry is encouraged to retain redundant employees, worker mobility is low and productivity remains low by global standards. Since 2010 the system is in survival mode, wages have not sagged enough to cause social unrest, given increasing repression, but industry has not modernized. The running history is mostly anecdotal; tables of numerical statistics, if such exist, are absent, at least in the audiobook version. All fascinating stuff.

I found Miller's previous book, The Struggle To Save The Soviet Economy to be an excellent explanation for why the USSR broke up. Now Miller explains what has happened since and enables one to understand the constraints within which Russian policy makers operate.

Putin has to put stability ahead of economic efficiency. Though he's well aware of which policies would boost economic development and he tries to pursue them within the limits imposed by the need for political stability.

I am surprised that the Russian government only collects 15% GDP in taxes or that corruption is not the top concern of Russian businesses. Also, the need to please pensioners is a major concern.

It doesn't seem likely to me that a different leader, selected by a more democratic process, would govern Russia better. Rather, I would expect big budget deficits if a leader had an ever greater need to cater to public opinion.

Russia's economy revolves around oil. Congrats, I just saved you 8 hours of your life. if you're expecting to learn something new/interesting about Russia, lower your expectations; like a lot.

I really enjoyed learning the ins and outs of how the Russian government manages society. They use a combination of a bloated welfare system and periodic crackdowns to maintain order. At least until recently.

gives a good big picture view of Putin's political, economic, and geopolitical strategy and his governing coalition and tactics. names quite objectively both the successes, failures, and limits of his regime of the past couple decades.

Report up to 2018, elementary economics

Sort of like a light NYTIMES article. Useful, but not very deep. This is not Masha Gessen. It is not even Brookings Institute level.

A good book for anyone interested in political economics, although the narrator is a bit off (I’ve heard worse, though).

So much better than a news story

If you’re interested in current events, this is a great survey of modern Russia. It’s not too heavy but so much more insightful than media stories. I’ve lived through all the events in this book but don’t have time to pay close enough attention to string it all together. This book did that for me.

My only criticism of the book was that a lot of material from the first half of the book gets repeated, sometimes more than once, unnecessarily in the latter half of the book. It’s a short book but could have been probably an hour shorter.

Seems to be a lot of factual information presented in a non biased fashion. I really learned a lot. Good narration. very enjoyable

Informative Even if Skewed

Highly informative description of the Russian economy under the direct and indirect leadership of Vladimir Putin. Unfortunately it falls victim to the common practice of bias against Putin, although the author does manage to eek out some credit to the man maligned so frequently by the West. As a US citizen observing the actions of Russia under the leadership of Putin I am impressed. The government stands as an exemplary model of fiscal discipline, in stark contrast to the profligacy of the West.