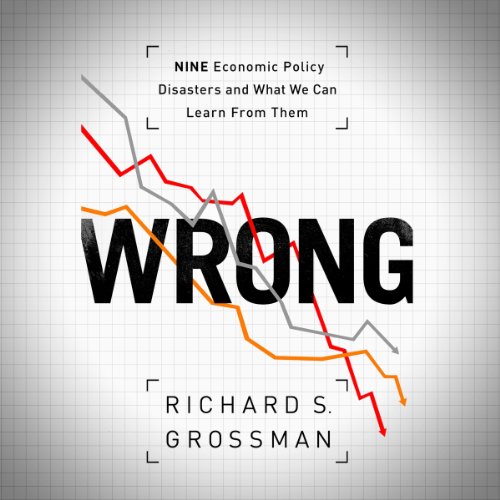 WRONG: Nine Economic Policy Disasters and What We Can Learn from Them

By: Richard S. Grossman
Narrated by: Dennis Holland
Try for £0.00

In recent years, the world has been rocked by major economic crises, most notably the devastating collapse of Lehman Brothers, the largest bankruptcy in American history, which triggered the breathtakingly destructive sub-prime disaster. What sparks these vast economic calamities? Why do our economic policy makers fail to protect us from such upheavals? In Wrong, economist Richard Grossman addresses such questions, shining a light on the poor thinking behind nine of the worst economic policy mistakes of the past 200 years, missteps whose outcomes ranged from appalling to tragic. Grossman tells the story behind each misconceived economic move, explaining why the policy was adopted, how it was implemented, and its short- and long-term consequences. In each case, he shows that the main culprits were policy makers who were guided by ideology rather than economics. For instance, Wrong looks at how America's unfounded fear of a centralized monetary authority caused them to reject two central banks, condemning the nation to wave after wave of financial panics. He describes how Britain's blind commitment to free markets, rather than to assisting the starving in Ireland, led to one of the 19th century's worst humanitarian tragedies - the Irish famine. And he shows how Britain's reestablishment of the gold standard after World War I, fuelled largely by a desire to recapture its pre-war dominance, helped to turn what would otherwise have been a normal recession into the Great Depression. Grossman also explores the Smoot-Hawley Tariff of 1930, Japan's lost decade of the 1990s, the American subprime crisis, and the present European sovereign debt crisis.

Economic policy should be based on cold, hard economic analysis, Grossman concludes, not on an unquestioning commitment to a particular ideology. Wrong shows what happens when this sensible advice is ignored.

What listeners say about WRONG: Nine Economic Policy Disasters and What We Can Learn from Them

Brilliantly composed, thorough presentation that I may add was eloquently written in such a manner that the logic & insight of complex subject matter could be easily understood & digested by a vast, general audience (& experts alike).

Subject matter especially pertaining to fiscal & monetary tools & policies can be particularly challenging to present in a way that can be understood by a general audience & such matters were step by step simplified into logical explanations that made sense of these complex intricacies.

It would be difficult to top this presentation in its thorough coverage of each topic attempted, simplification of complex subject matter into logical explanations, all into fluid, enjoyable, conversational spirit of making things better than they were before.

John Maynard Keynes quote at the end was touching to the effect & summed up the book perfectly "When someone persuades me that I am wrong, I change my mind. What do you do?"

The moral of this book is again summed up again by John Maynard Keynes "It is better to be roughly right than precisely wrong." Improving the world by exercising the mind, understanding the risks & rewards of future policies by evaluating the past is what this book attempts & successfully achieves.