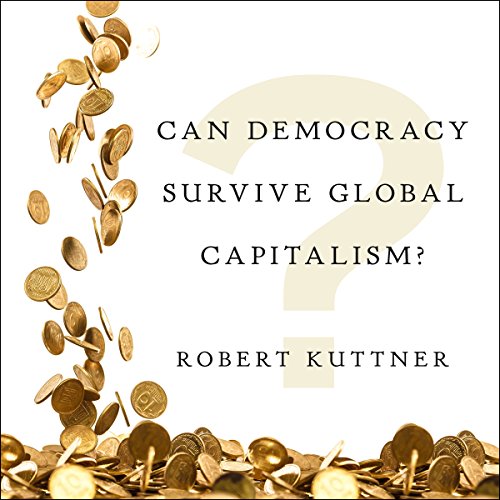 By: Robert Kuttner
Narrated by: Mike Chamberlain
Try for £0.00

Before and after World War II, a serendipitous confluence of events created a healthy balance between the market and the polity - between the engine of capitalism and the egalitarian ideals of democracy. Under Roosevelt's New Deal, unions and collective bargaining were legalized. Glass-Steagall reined in speculative finance. At Bretton Woods, a global financial system was devised explicitly to allow nations to manage capitalism.

Yet this golden era turned out to be lightning in a bottle. From the 1970s on, a power shift occurred, in which financial regulations were rolled back, taxes were cut, inequality worsened, and disheartened voters turned to far-right faux populism. Robert Kuttner lays out the events that led to the postwar miracle, and charts its dissolution all the way to Trump, Brexit, and the tenuous state of the EU.

Is today's poisonous alliance of reckless finance and ultra-nationalism inevitable? Or can democracy find a way to survive?

What listeners say about Can Democracy Survive Global Capitalism?

The same old stuff, without nuance

If you are looking for the usual conversation about the state of America from a liberal perspective, this is your book. If you are looking for nuance, balance and creativity, not so much.
A consistently romantic view of workers and the casting of corporations and capitalism, which the author deems as the same thing, as demons, creates a plot that writes itself.

Hits the nail on the head about whats wrong today

This book needs to be read by all working class Americans. It lays out our economic woes precisely and exposes the lies of our corporate owned media and corporate owned politicians.

Unlike the book "Why Democracies Fail" it accurately calls out the cause of the USA's ills as runaway power of the Rich. Over time the wealthy have weakened regulations, workers unions, and democracy just as they had done similarly prior New Deal era.

I cannot recommend this book any more strongly!!!

This book pulls no punches

Robert Kuttner identifies the guilty parties in the ongoing global heist from the non-rich to the rich. Kuttner even criticizes Thomas Piketty on some points—from a progressive perspective! Here you will find comprehensive documented details showing how business as usual continues, but not in the beneficial way the cheerleaders of the current practices of capitalism would have you believe.

Kuttner goes a little further than other writers who've addressed the problem of government capture by the financial oligarchy (frankly fascism), in that he emphatically prescribes remedies that are primarily political (and not just regulatory). Political transformation is the only way to remove the discrepancy between current government trends of tax cuts for the rich (with reductions in social services, environmental protection, and infrastructure) and consistent public opinion polling indicating preference for freedom from debt that involves universal health care, public education, improved transportation systems, sound ecological practices, and mitigation of extreme inequality.

Effecting such political transformation involves reduction in gerrymandering (or better yet, ranked-choice voting), including workers on corporate boards, and increasing voter participation from its current abysmal levels. (The US Senate remains an enduring non-democratic institution, which was a compromise between the original 13 states in 1787—that situation has long since evolved, and we will have to address the difficult question of apportionment in the Senate if the US is to ever have a truly representative government.) Regardless of the structure of the Senate, voter apathy is a major failure in politics as all levels that must be corrected.

Removing undue influence in elections is a different and looming challenge since the Citizens United decision, which opened the floodgates for all persons (or entities) to exercise their 1st Amendment rights of free speech—as long as you have the money to spend on exorbitant advertising and promotion costs (hint: that's not most of us). Kuttner highlights the critical distinction between a one-person-one-vote system and one-dollar-one-vote system—unfortunately, in practical respects we're currently operating under the latter arrangement. This influence-money goes to manipulate people to vote for candidates and initiatives, based on voters' perceived needs as indicated by data analytics. On the surface, persuasion based on public perception is what political campaigns are all about—but when a critical mass of voters is disengaged and only peripherally paying attention, slight of hand logic and visceral manipulation carry outsized influence. With the vast majority of voters in TL;DR mode regarding politics, a communications means short of wonk level is needed to reach most people on critical issues.

Internationally, Kuttner addresses trans-national rules and norms that formalize private equity leeching—these must be thrown into full reverse. Purchased companies should be nurtured and operated productively, not cannibalized for investor profit. One can already hear the protests to this assertion: "But that's how the system operates!"—that's true, and it must stop! We need a system in which investors have no incentive to cannibalize the economy's underpinnings in order to prosper.

Humans are social animals, who thrive only when we cooperate fairly with one another—Kuttner demonstrates why government, finance, industry, and labor must all be socially responsible in everything they do and demand. Enforced rules (legal or societal) are appropriate to ensure that is the case. A socially responsible tax structure (which we currently do not have) also would go a long way toward this end. Recognizing the humanity of those who are not seen as humans (in the eyes of different and often opposing groups) is an essential element to the cure—this is a reciprocal requirement, from which no one is exempt.

After all its proven-false claims of optimal prosperity, it is actually laissez-faire that is the road to serfdom. Socially responsible Keynesianism is a better road—let's make the requisite political transformation in order to take it.

I would define myself as a free market anti socialist. Which is exactly why this book was valuable for me. It didn't convert me, but it did shift my view significantly, not many books can do that.

Many activists are left wondering what the progressive movement should do next politically. Kuttner gives essential feedback.

Overall it is definitely a great book. I found it a little bit biased and one-sided but worthwhile reading it.

Does an exceptional job providing context for how the present neoliberal order came to be.

It uses evidence to describe the problems of global capitalism and provides solid ideas on mixed economy. the only problem is that the author is constraint in his ideological prison and cannot see that those led are those imposing corporate dark ages and responsible for the extreme right. They are not the solution they are the problem!