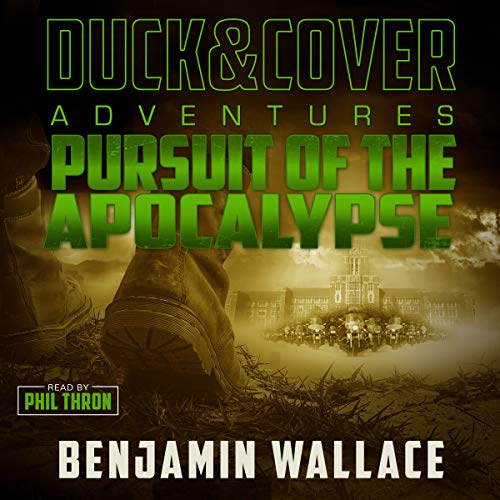 Pursuit of the Apocalypse

By: Benjamin Wallace
Narrated by: Phil Thron
Try for £0.00

There’s a bounty hunter to catch, an army to shake and a biker gang full of dentists hot on his tail.

The bounty hunter Mr. Christopher has kidnapped Erica, and The Librarian and his dog, Chewy are desperate to get her back.

Willie and Coy like money and they are after The Librarian to collect the price on his head. Hawk and his gang of wasteland raiders are after Willie and Coy for a breach of contact.

In the powerful city of Alasis, a movement is growing and the people consider The Librarian a hero. Lord Invictus wants the movement stopped and has sent the fearsome and mysterious Skinners to finish what Mr. Christopher started.

In the middle of it all is a city where the citizens prize freedom and equality above all other things, or else.

And, of course, there are bears.

It’s the end of the world as you've never known it.

What listeners say about Pursuit of the Apocalypse

I can honestly say this series gets better and better. The action more intense, the struggles greater and the stakes higher. Even the comedy got a big dose of improvement in two characters which I feel was sorely missing from the story. But by the end it also give you the feels. I’m now three books in and I’m hooked.

The best post-apocalyptic book series ever

When things go from bad to apocalyptic....

Yet another fantastic Post Apocalyptic tale for everyone's favourite Liberian, however for Kerry things take on a tragic twist that sends him on a quest for revenge; brilliantly read by Phil Thron, another highly recommended Post Apocalyptic story, it would make an excellent TV show.

as fantastic as the other books in the series

absolutely loved this as much as the other duck and cover books. great story. highly recommended

Going to need a moment...

The third installment of Benjamin Wallace's Duck & Cover Adventures is just as good as the first two... Full of the same humor and lighthearted murder that just gets you through the day.

Then you get to the end of the book and realize Benjamin has just stomped on your heart...

At that time you quickly go to the ole Audible library and find the next book... because you have to know what comes next.

Really hoping this isn't the last in the series because the ending was such a downer. If it's a transition into a new phase of the librarian's life then ok, but if that's it, what a load of crap to end on.

As a car guy, I loved the fight scene with the Challenger Hellcat and the raiders. It felt like true Mad Max movie scene and it really made me want to take some of those evasive driving courses that only Police get to learn. I can't wait to listen to the next book in the series!

For the movie, Stephen Colbert is the Librarian. Well written and read. I want more!

Another great installment to the Duck & Cover series. Loaded with action and tons of humor, Pursuit of the Apocalypse will keep you reading/listening to just one more chapter-just one more--just one more. I absolutely loved the mocking of political correctness. I will say the ending is one heck of a nut punch, but that only makes me want to know what happens next. As always Phil Thron does a fantastic job with the narration.

A fantastic addition to this series. The author takes a lot of jabs at the modern PC culture and it is hilarious. Outstanding climax but the end leaves a bitter taste in your mouth that can be only be cured with high levels of radiation.

Liked it almost to the end

I'd ranks this one third out of the first three. It still has the same style, pacing, and action/humor as the first two, but I felt like this one jumped around a little more. The town of Tolerance was a fun nod to the state of some people currently. I liked the addition of some new does of all types. I felt like Erica was a little shaky, like we know she can handle herself pretty well, but she'd be captured or trapped more than once for a long time in a way I'd assume she could handle. I also was very annoyed with the very end. *Spoilers ahead*... Like, everyone knows you check the guy that seems maybe dead but maybe not before you turn your back on him. I saw it coming the second Jerry ignored him. You'd think he'd know better by now.

That took a turn to the darkness...

Really enjoying this series. The ending of this book didn't seem to "fit" with the theme of the series. Took a pretty hard turn in the last chapter. I don't expect fairy tales and happy endings but I was a bit thrown off. Looking forward to seeing where this goes.