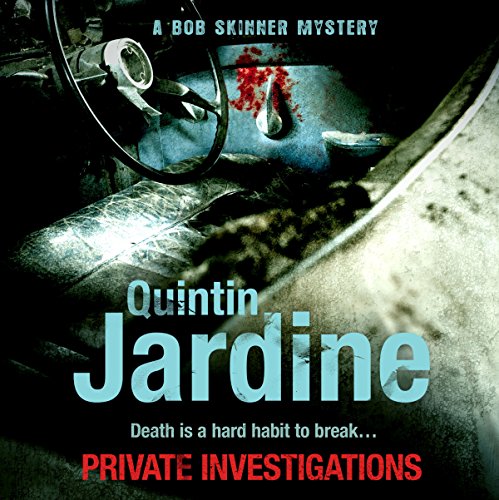 Quintin Jardine's 26th Bob Skinner mystery sees the Edinburgh sleuth plunged into a gruelling new case in which no score will go unsettled.

Former Chief Constable Bob Skinner has uncovered his fair share of crime scenes over his 30-year career. But few have affected him quite as much as the horrifying sight he finds stowed in the back of a stolen car that collides with his own on the outskirts of Edinburgh.

As his former colleagues investigate the mystery, Skinner is left to take on the unusual challenge of tracing a million-pound yacht vanished from its mooring. From the outside the two events couldn't seem less connected. And yet, as the body count rises, a link surfaces that could provide the key to both.

And as discord spreads within the newly unified Police Scotland, it will soon become clear whether Skinner is on the side of the angels...or working against them.

What listeners say about Private Investigations

The underlying story is interesting & holds attention.
For me, the main protagonist is a tad too self serving & condescending but others may not find this an issue.
On the whole value for money & entertaining, after all I listened until the end.
Lately that appears to be all one can hope for.
I would love to find some new authors that could possibly inject some excitement into their creations.

Not really putdownable. I love these books and their characterisations. The stories are great too.

And ever full of surprises, as different characters evolve and develop.
Following them is what these books ate all about for me.

One of the best Skinners since the early days

I have read all the Skinner books ( and the other Quintin Jardines as well).
This is the best for a while.

A wonderful story writer and the perfect narrator provide the best listening experience yet again.
I was fully immersed in this story from start to finish.
Well done Mr Jardine in allowing the supporting players to come out and shine and your flawed hero coming to terms with his life and searching for a better way was a delight.
I cannot wait for the next mystery and update on these wonderful characters.