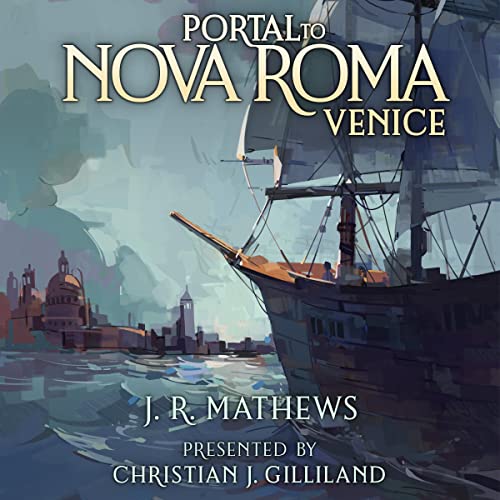 Audiobook of book two in the breakout hit series Portal to Nova Roma is now available! With more than 16 million pages read on Kindle Unlimited, thousands of Kindle copies sold, and 3,400+ ratings with a 4.7 star average, make sure to pick up the sequel today!

Alexander and his growing legion have managed to escape Nova Roma and, more importantly, learned that the rest of the world may not be as ravaged by monsters as they had all thought. Join them as they set sail for ancient Venice, the Queen of the Adriatic, to try to learn more about the wider world outside Nova Roma. Along the way, they'll encounter a growing plague of deadly pirates, deceitful old merchant families out to quash any new competitors in the region, mysterious new allies, and much more.

Just as Alexander is starting to feel hope that humanity may actually survive, something happens to tear him away from everyone and everything he has come to care about. Lost, shackled, and without the majority of his skills, Alexander will be forced to confront a new side of himself, a darker, more violent side that threatens to take control of his mind and the new powers he has managed to craft for himself. If he can't learn to resist the growing corruption of his mind, he may not just be a danger to himself and those he cares about, but may become a danger to the very world itself.

What listeners say about Portal to Nova Roma: Venice

Overall idea of the book is great and very promising, but the MC incompetence (considering him being powerfully AI with access to nanites) gets frustrating sometimes.

Author wrote himself into a corner !!!

The key concepts in the initial book were bold and actually pretty intriguing. The issue here is that the author simply does not have the experience to weave all those concepts together in a way that makes sense when anyone thinks about if for a couple of seconds.

For example, the MC is apparently an incredibly powerful AI that has retained not only his memory of all human knowledge but presumably still has the computing ability he had on earth. The problem with this premise, is that the actions of the mc in no way reflect this level of intelligence and he makes way too many mistakes for this to be realistic.

You can't say the MC was part of a group of AIs that took over earth and managed to subdue all humanity in one breath and in the next breath show him making mistakes that most humans won't make given access to the same amount of information. Whats the point of an AI that has the same limitations as a human.

I don't expect my MCs to be overpowered and perfect, but i do expect their actions to make sense within the context the author has set himself. Based on this, i can only conclude that the author added concepts that he simply does not have the knowledge or experience to handle.

Also, the versatility of nanites that are programmable could literally be another form of magic that the MC could have actively utilized in a multitude of ways other than cleaning his clothes and creating bullets. He doesn't even need classes if he has nanite abilities as the potential of nanites are practically incalculable. Putting aside his supposed intelligence, how he manages to lose any fights while having access to controllable nanites is beyond me.

That being said, I thought the performance by Christian J. Gilliland was great.

I was super hyped after the first book and I have to say, the second one does not disappoint one bit.

It's super action packed. I appreciate the autor for not beating around the bush for the sake of words or splitting the story into two books.

The amount of stuff happening is unreal. It just delivering and delivering. And it does it in a very enjoyable manner. Every time something new was introduced I was very hyepd and couldn't believe that we got what we got.

Especially because towards the end I thought it will surely not get into the remaining chunk of action and it will be left for the next book. Wrong. I love this so much.

As the first book, the writing and narration are sublime.

Easily top 3 all time LitRPG series for me.

Having read literally hundreds of LitRPG titles, I can honestly say this series ranks among the best of the genre.

This second installment lived up to its expectations and was just thouroughly enjoyable.

I can hardly wait for the next installment!

Who needs a plan?

You get the impression that the author is sort of making it up as they go with these books. Having said that I have given this and it's predecessor 4 stars. It moves along quickly enough for it not to be dull but the reason I think they are making it up as they go is certain things happen and from the outside looking in you wonder if they are fixing something. For example He recruits a spirit bodyguard in book 1 and then gets rid of it shortly after. This is because either 1, he couldn't think of anything for it to do apart form hang around in the background or 2, he thought of another spirit entity that would be better. There are quite a few things like this that occur which makes me think he's had second thoughts about something but rather than re-write it's easier to get rid or ignore it and never mention it again and hope no one notices.

Having said all that I will listen to book 3 as I think it's better than book 1 and will hopefully get better. The author will never be a brilliant storyteller but not everyone can be. The narration is also slightly dodgy, with over the top Italian accents and quite a poor Scottish accent he gives the dwarfs. In fact I deserve recognition for guessing what the latter was supposed to be. Having said that the narrator is a yank so you can't judge him too harshly for his attempt at the Scots accent.

Both first and second book are written really well and the build up just keeps you interesting.
One of the more unique stories iv read in a long time.
Keep them coming

JR Mathews sequel to Portal to Nova Roma continues his excellent building the world the hero Alexander has found himself in in a great new story, developing his characters whilst expanding them with a rich interesting storyline. Well down to the author and Christian the narrator adds yet more depth to the characters with the vocal adaptation of the novel. An excellent book, highly recommended to readers/listeners.

I really enjoyed this read. I wasn't sure how the story would develop but I would definitely recommend taking the time to listen to book #2.

it got a case of the stupid

A demon “Possesses” a robotic AI ………really I mean it’s just stupid AI’s can have a lot of problems but demon possession should not be one. It like the Author forgotten his main character is a robotic person instead of a natural born one and trying to teach him to meditate. what uses it is for him? Organize his thoughts? teach him to turn off his thoughts? Just a BS reason to add in meditation for robots?

Story picks right up where it left off and even has a excellent summary of the first book!
I’ve read hundreds of LitRPG and Portal to Nova Roma is one of the top few I’ve ever listened to but also the most unique world, lore and classes!

loved it. We want more. Can't wait for the next one. I hope the rest of the books are as good.

This entry really expands the world. You find out that the MC isn't really overpowered, just started somewhere that everyone is weak. Adds a lot more depth to the characters. Very enjoyable.

Just incase you didnt catch it the last five times

Lets repeat every other thing several times, MINUTES, of this in at least every third of fourth chapter... He wrote one page went to bed, woke up and forgot what he wrote so he just rewrote it slightly different. If the inane over explaining of something already explained was with just more complex subject like world mechanics I'd not mention it but again "My body" five times in one paragraph because apparently the thesaurus is a mythical beast.

Then the weapons, ten minutes of why "Bow are better then guns because... because i dont know how weapons work and i want them to be better because people where mean in the last book because i picked a gun." Again, magical system math is great, its why people read these kinda books, but at least make the reason feel like something other then lazy hand waving. The whole statement about how he can load and fire a bow faster then a lever action rifle... The litteral flick of a wrist...

this world is interesting, the concepts are interesting, many of the character except for the worlds dumbest AI are interesting.
Christian J. Gilliland's voice is a honey balm to my chapped ears and probably the only reason i picked up the second book.

Failed to hold up to expectations

I enjoyed Mathew's first two books. ßut this one failed in so many ways. What didn't fail was the monotonous narrator's voice,plus the lackluster story put me into deep slumber thus fixing my insomnia.

This new book needed an editor to tell the author to stop performing a 180 or turning the super advanced AI into pre teen moron.

Book one was interesting but the story has lost its edge. It seems to have taken a hard turn