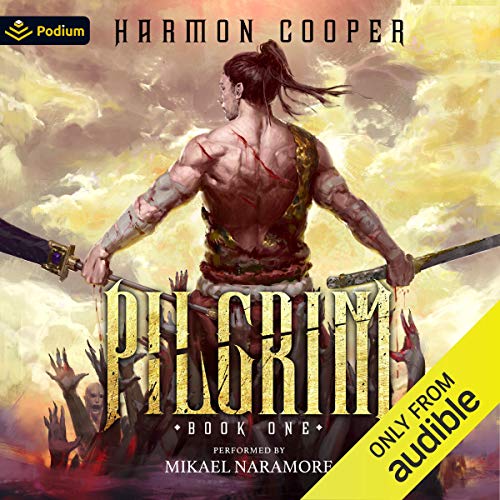 By: Harmon Cooper
Narrated by: Mikael Naramore
Try for £0.00

A former assassin. An unspeakable past. A new beginning.

Abandoned at birth and raised to be an assassin by the mysterious Diyu Brotherhood, Danzen has had enough of the life of a contract killer. But escaping his past is as impossible as running from his inner demons....

In the remote and mystical Suja Valley, the farthest corner of the known world, it’s only a matter of time before trouble comes hunting him...or he spills a drop of his own blood.

Pilgrim is a xianxia cultivation novel, inspired by the Witcher books, John Wick films, the Inuyasha anime, the Preacher comics, and the movie Yojimbo.

What listeners say about Pilgrim

The only problems I had with this book would be that sometimes the characters would be told something or learn something and later on be surprised about that same information which was a bit weird also to the author please stop using the words "famed sword" please 🙏 there are many other words you can use. other then that I did find some decisions really weird like the MC is trying to save someone's life and needs info but will stop to have a chat and maybe a bite to eat but other that those small things the books great

This new series by Cooper with Narramore doing naration works wonders.
The characters are well crafted with quite a bit of empathyp for the listener to bond with the narrative.
I also liked how the story had a chance to come to a satisfying point giving this a good length to listen to for your cash without going into too many details that seem superflous but rather adds to the experience.
Narramore is very good as i would expect from one of my favourite narrators and he deals with the demon voice and female voices very well weaving the strange creatures into a believable world of interest.
My only issue is i don't have a book 2 or audio 2 yet to continue the dialogue.

with humor, action and an interesting world this book is definitely well worth the read

Someone already posted this before, but I'd like to reitterate.
The episodic way in which this story was told, each with a minor plotline derived from rising action, climax, and falling action, all leading to a final culmination of epic proportions really lends itself to being perfectly suited for a Netflix tv series.
It is a great book that came out of left field. Cooper is a true wordsmith that draws you in to his fantastical realm and makes you really feel the character's exhaustion for combat.
It reminded me a little of the Night Angel Trilogy, save for the character being older and wiser, where he seeks redemption for a terrible past. Stories like this always draw me in. Cannot wait for book2!

I had so much fun with this Audible. I loved listening to the adventure of tired assassin Danzen helping out the villagers while bracing for his shady past to finally catch up with him. I cant wait for the next book. The Narrator was awesome I hope he does the entire series.

I really disliked this book.

The book is labeled as a cultivation novel. The book talks about secondary characters that are into cultivation. But the main character has refused the option to cultivate. The cultivation is also not described beyond saying the people who do it have ranks and cultivate by "bending their echos". So if your looking for a cultivation novel, this book is not it. Maybe future books will have it, but ugh not this one. I was really looking forward to hearing the main character progress his powers and abilities.

The book was so tedious. The main character was a constant grumbling mess. There were secondary characters to add relief, but they just came off as poorly written. I'd just really cannot recommend this book. I don't know if the series gets better. But I'm not willing to spend more money to find out.

our hero has an affliction that makes his flying super sharp sword the most incompatible weapon. along with other not making sense parts i don't expect a fantasy book to be realistic by any means. I just like the plot and details to sorta fit if you squint your eyes a bit sorta. returned for credit!

A Netflix Series In a Book

This book was awesome! Due to its episodic telling, i felt like i was hearing a series that i could stop and pick back up on whenever. The story is fantastic and so far one of my favorites now. Characters are unique and memorable, while the narration is clear and distinctly well done. All in all it was a great use of a credit and i look forward for the books to come.

All I can say is wow I read the book and fell in love with it . Mikael really brings the characters to life there’s so much action and tons of magical yoni the character development is superb it’s an outstanding listen folks

This have nothing to do with LitRpg

I have made it trough.
Story is ... well it difficult to say if there is a story. MC quit one organization and the he lived happy life far away doing some tasks from time to time.
Not going for next one int the series.
If possible I'm going to return it.

He just wanted to write poorly structured action sequences with no idea how to string them together. His writing style is childish and derivative. I find it difficult to believe someone chose to put money into this ridiculous story's publication.

Narrator was too much...

I dont know if the book was good or not. but hated the narrator. He was fine at prose, but his voices were cringeworthy. Quit within an hour

a fun adventure of redemption

I certainly enjoyed this tale and all the fun characters. Magic, enchanted weapons and Demons. Lots of action and quests. I think anyone would enjoy this well read book.