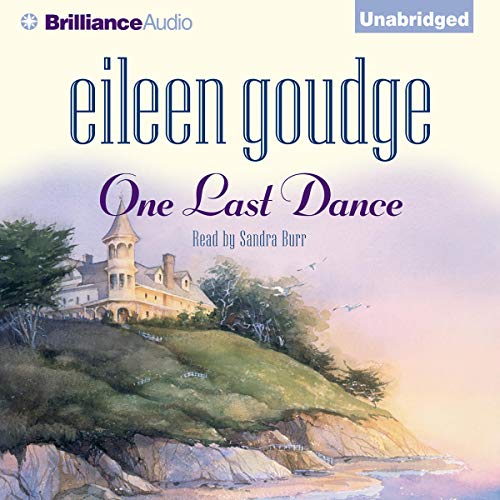 By: Eileen Goudge
Narrated by: Sandra Burr
Try for £0.00

Best-selling author Eileen Goudge turns up the heat in a passionate drama of secrets and deadly betrayal.

On the eve of their 40th wedding anniversary, the Seagraves are among the most envied couples in their community, and still deeply in love - until the night Lydia Seagrave picks up a gun and shoots her husband.

As the devastated sisters come together to unravel the truth about their family, they must also face the lies and betrayals in which they've unknowingly taken part. They must rebuild from their shattered illusions a life that is honest - even at the risk of pain.

What listeners say about One Last Dance

This book sounded so promising - yet what a disappointment!! The author is so sappy - characters like Johnny and Kitty utter things like "Oh, thank goodness you've come!" and "Whatever happened to Daddy?" and other outdated, nonsensical remarks. Just imagine June murdering Ward Cleaver - what should have been a gritty, nuanced book just sounds ridiculous penned by this author. Don't get me started about the love scenes - "she wept, and he held her gently...". Good grief! Plus the narrator should be reading happy children's books. Just a really bad listen all around.

Loved the storyline and all the twists and turns. Eileen Goudge one of my new favourite authors
.

I thoroughly enjoyed this book. Good characters that I did not want to say 'goodbye' to. The story was excellent with just enough suspense. I am grateful to have found a new author I really enjoy.

One Last Dance was exciting after several pages. Then it was hard to put down. The more you read, the more you wanted to read. Very interesting plot twist. I highly recommend this book. I will read it again in a year or so. I loved it.

it was pretty good

I enjoyed it, but.... it was kind of all over the place. jumping around from one sister to the other randomly. I saw the ending a mile away.

This was an 11 hour listen with good narration. There are quite a few characters, and I wasn’t drawn in enough to remember who was who until close to the end. It held my attention enough to finish it, and I prefer longer audible books because I get more for my money. Some characters were at least reasonably likable, others not so much. The narration was the best part of the book as far as I’m concerned. It’s not likely I’ll ever think about this book again, nor remember it a month from now. I doubt I’ll read another novel by this author.