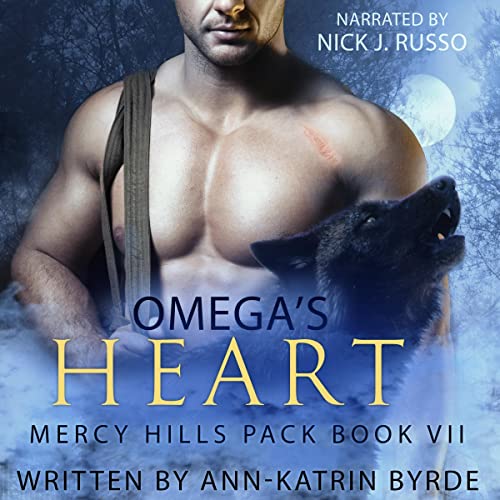 All Felix wanted was what the rest of the White River omegas had—a mate, a home, pups. But when you tower over all your potential suitors, romance is hard to come by. Watching omegas ten years his junior get their happy ever after hurts more with each mating ceremony, so he begs his parents to let him move to Mercy Hills—not to find a mate, but simply to find a future where he isn't a dead weight dragging on those around him. Instead, he finds a cranky, broken, sarcastic alpha who is desperately in need of someone to sit him down and tell him how things are. And who looks at Felix like the sun shines out of his eyes.

Kaden came home from the Army heavier by the weight of a useless medal, lighter by several body parts, and with no real idea how to go forward. As he struggles to find his place in the pack, he takes solace in the company of the large omega sent to help him adjust. When Kaden discovers that Felix's size means he's never even been kissed, nothing will do for Kaden except to get the jump on all those other idiots who passed Felix up, mate this handsome creature, and give Felix everything his heart has ever desired.

"Come work for me and we'll change your world...."

Finding a mate is the easy part. As the Alpha's brother and decorated war hero, Kaden finds himself at the center of two political campaigns and must learn how to walk with a paw in both the shifter world, and the human one. And while he travels, courting the packs in a political campaign the likes of which the country has never seen before, he and Felix become an almost unstoppable pair, determined to forge new alliances between human and shifter, and lay the groundwork for their eventual freedom.

Omega's Heart is 256,000 words of slow burn passion between two exceptional shifters, warm family moments, surprising new friends, even more surprising new opportunities, political intrigue, and a turning point in the path that all the packs will eventually follow.

What listeners say about Omega's Heart

It did not feel right

This book was ok just like the other books . Predictable nothing new could have been a little shorter like 7 hours .

Great continuation of an awesome series

Poor Felix, he just kept getting overlooked because he didn't fit the mold of an Omega. At least he wasn't abused like some of our other Omega's. Kaden, even though he went through hell & wasn't drowning in "poor" me mentality. These two were perfect for each other. I'm glad that things for starting to look better for shifters & just maybe the walls will finally get knocked down. OMG I knew Holland had it bad, but his father is a real POS. I can't wait for the next book in the series

My Favoite in my Favorite Series

I have been waiting for this release since the book first came out! I absolutely love these characters. I have many similarities with Felix, and his insecurity and resigned existence resonated. I also loved Kaden and his struggle "coming home." As always, excellent story telling and world building. I hope for more in this universe, but I respect the authors' choice if they choose not to. I prefer another great addition to Mercy Hill's story over a weak, poorly written detractors.

That said, I really do hope for more. What happens with Cale and his and Holland's oxygen thief father? Kaden's involvement in the Presidential run? Changing the laws?

What can I say!! Humm well if you haven't started from the beginning, then you need too!! This is one of my favorite series. I have many types of books, and I have listened to this series so many times..(waiting for the next one) and I will continue listening to it even when it's finished. I will be sad. I very much enjoy this series. thank you for this very enjoyable series...

I liked how Kaden slowly softened up towards Felix and found what a gem he was a his heart's desire. That Montana alpha made me sick and furious with their greed and poor omega treatment. Veronica was like a recalcitrant child- unwilling to learn boundaries and her place, but by the end she grew. I loved when Felix tried to put her in place with bold truths. It ended on a good note, but still prejudices and unfair treatment of omegas improving by bits and pieces. I voluntarily listened to a free copy of this and am giving an honest review. The narrator did an excellent job bringing the characters and story to life. Looking forward to more.