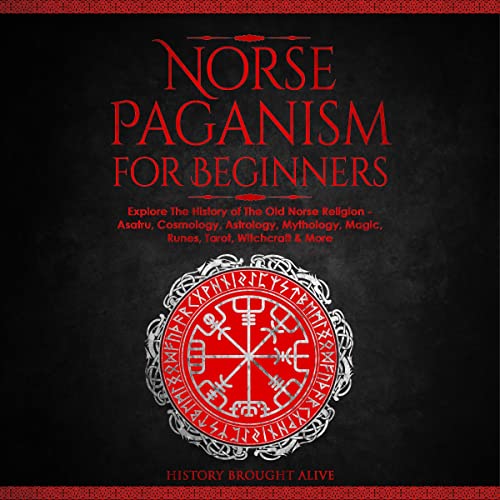 Norse Paganism for Beginners: Explore the History of the Old Norse Religion

By: History Brought Alive
Narrated by: Theodore Rose
Try for £0.00

Discover the history, mythology, and practices of Norse Paganism.

Let us take you back in time, when the Norse people lived in an enchanted and sacred world—a time famously shrouded in mystery, magic, and witchcraft.

Norse Paganism has survived the centuries, the rise and fall of empires, and the introduction of new religions.

More than just a religion, it is also a way of life to help one lead a fulfilling existence…and every person, no matter their race, religion, or culture is welcome.

History Brought Alive provides you with a single credible source detailing Norse Paganism, its history, beliefs, people, and what it looks like in our modern world. This book has been written using a variety of scholarly articles and books containing translations of the few existing original texts of the Norse people.

You will walk away from this book with an accurate and detailed knowledge, allowing you to determine the historical truth portrayed in the media and decide what Norse Pagan pathway suits your lifestyle.

Inside this book, you will discover

And much, much more.

Don’t waste another minute; everything you need to know is in this book!

So get comfortable and get ready to be transported into a world of myth, magic, and adventure: the world of Norse Paganism.

What listeners say about Norse Paganism for Beginners: Explore the History of the Old Norse Religion

This audiobook lets you learn about the Norse pagan beliefs, practices and values. For beginners who are actually wanting to learn and know about Norse paganism.

I have a few Norse audiobook collection and I think this one is also a great audiobook. Covers a wide range of information about the Norse people, mythology and beliefs.

Really for beginners. Curious about the Norse's Asatru, cosmology and astrology. I think this is a great audiobook to start with.

Great Norse Paganism audiobook and exactly what I am looking for. Looking to learn more about how to practice and seek it more. Highly recommended.

I loved it truth be told. Most memorable moment would be learning different arears of this particular way of living.

A Decent Summary with a few minor errors

The narration was okay with some more obvious pronunciation issues (but it was close enough). The topic itself is a very quick summary of a Norse culture (circa 10th to 12th centuries). For the most part, I would have been happier with a little more as some of the brief treatments might lead to a few minor misunderstandings and some would just be more interesting IMHO if etymology were included … such as what exactly the names of each of the nine realms actually mean.

Additionally there are a few careless comments that imply Easter was synchronized from a Norse holiday instead of the other way around (based solely upon the “bunny” avatar). No serious scholar that I know of would make that connection (although it is pretty common on social media). There are some comparisons between Egyptian myths and Norse myths that are a bit of a stretch with no real support other than similarities (which would be expected for any Indo-European cultures), so fun to think about but not really accepted by any consensus. All that said … this was a pretty fair introduction to the topic and I would recommend it.

I was given this free advance review copy (ARC) ebook at my request and have voluntarily left this review.

Good overview and contents in exploring the history of the old Norse religion. This would let you discover the beliefs of Norse paganism.

I like that this audiobook was really thorough and covered a lot of interesting topics about Norse paganism and mythology. Highly recommended.

Informative resource to learn about Norse pagan beliefs. Explore the history of Norse religion from this audiobook.

Most people do not have that much interest in learning about Norse but this audiobook is quite unique because it has all the contents that I am looking for. Educational and entertaining.