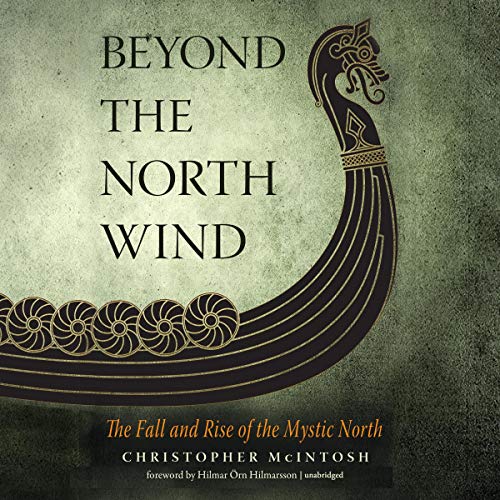 Beyond the North Wind

"The North" is simultaneously a location, a direction, and a mystical concept. Although this concept has ancient roots in mythology, folklore, and fairy tales, it continues to resonate today within modern culture. McIntosh leads listeners, chapter by chapter, through the magical and spiritual history of the North, as well as its modern manifestations, as documented through physical records, such as runestones and megaliths, but also through mythology and lore.

This mythic conception of a unique, powerful, and mysterious Northern civilization was known to the Greeks as "Hyberborea" - the "Land Beyond the North Wind" - which they considered to be the true origin place of their god, Apollo, bringer of civilization. Through the Greeks, this concept of the mythic North would spread throughout Western civilization.

In addition, McIntosh discusses Russian Hyperboreanism, which he describes as among "the most influential of the new religions and quasi-religious movements that have sprung up in Russia since the fall of Communism" and which is currently almost unknown in the West.

What listeners say about Beyond the North Wind

Esoteric nonsense. Avoid this bogus made up stuff and read some real Nordic literature instead.

it seems to be a justification of a north sea Atlantis with eye wateringly bad logic. though to be honest I didn't make it all the way through.

If you want to listen to a collage of "theories" about a poorly-defined "mystic north", this is the book for you. If you enjoy learning about facts, literature, mythology, or anthropology, you will find reading the back of a cereal box more informative than this mess of a thing.
The narrator does a valiant effort, but the content is so poor that nothing can fix it.

I don't know why I put myself thorough this.
Firstly I must commend the narrator Simon Vance on managing to make some seriously dubious material sound believable. The material itself is a hodgepodge of sources, many that should not be included in a serious book, and fundamentally this is the problem with books of this ilk.
The author(s) begin by boasting of their reading pedigree which includes Alistair Crowley. This sets the tone for much of the book: lists of authors and works cherry picked to support the authors claims.
Where the book is strongest is in its historic overview of the evolution the various cult/religious societies. Where it is weakest is in its drinking the Kool Aid of what they preach.
As with other books of this type, you know you are on rocky grounds when they start using comic books, internet blogs, and the existence of video games to support their over reaching theory. Claims that doing an internet search in some way supports your theory is pure folly. The internet is full of nonsense and lies. The existence of a web page in no way proves anything beyond the fact that someone wrote something and published it on a web page. And fundamentally that is the problem here. Just because someone wrote something and published it, does not make it true.
Citing lists of sources and saying 'if we disregard some of the authors more outlandish claims, can we not argue that X is true?'is like saying 'if we disregard the fact that Harry Potter is a work of fiction, can we not use him to support the existence of wizards?'. And throughout this book the author(s) do just that. The same fuzzy logic that Intelligent Design uses to support their creationist theories are used here. At one point the author even suggests that a Proto Indo European people MAY have been founded by alien visitors to this planet. This is pure fantasy land, of the L. Ron Hubbard variety.
A further problem is that many of the authors views (and those cited) use etymology to support their claims, and it becomes abundantly clear from the outset that the authors really do not understand what they are taking about. Proto Indo European is not a language or people. It is a reconstruction of a theorised prehistoric language by the process of cross analysis of existing language sources. The end result is an 'imagined' language (there are no existing documents in PIE) and the people who spoke it are a mystery to us (there is no PIE civilization to speak of). The authors of this book continually refer to this prehistoric culture as if it is one homogeneous group, which we know it was not. And claims that ancient cultures were in some amazing way more advanced than we are now because they were good at maths and star gazing (keep in mind that these supposed mathematically advanced civilzations had no number zero, no way to calculate fractions, and often used outlandishly huge base systems for calculating because they could handle anything but a whole number), we see a rosy tinted view of the ancients as Atlantans from the pages of a comic book. It's this type of lazy armchair sleuthing that makes it impossible to take any other claims seriously.
Finally, an entire chapter is dedicated to talking about Vikings in popular fiction and music, as if this in some way supports the premise of the book. Marvel's depiction of Thor or the music of Sigur Ros as much supports the author's claims as the Muppets support the work of Attenborough. I kept wanting to shout 'just grow up' every time a pop reference such as the Matrix reared its head.
So, to conclude, I don't know why I put myself through this, but if you want to meander through the Wonderland of fuzzy logic and Viking cults, this is the book for you.

Well researched, well written and well narrated. So fascinating and intriguing. I’m listening to it all over again! A real gem.

the book provides a general and fairly detailed overview of the Nordic heritage. Good source material for anyone interested in comparative mythology.

I'm glad I didn't pay for this

Agree with other reviewers who have given this a poor rating. Also has the audacity in places to criticize other authors for being unscientific or unsubstantiated.

This is my favorite Norse men audio book. This give you everything that you need to know about the above.

I suppose you do have to have a passing interest in the overall subjects covered here & as it's a freebie I thought this would be, well, you know, crap. How wrong I was! An excellent listen just as long you know a wee bit about Norse history & are open-minded, this is an added bonus to the usual murder rape plunder & pillage of what you would normally find on your bookshelf. Again, this is subjective so don't blame me if it isn't for you. Could have done without the Marvel comic epic though 5*

I was expecting a more scientific and edifying exploration of concepts of “the north” in culture, literature, and music. Instead, this was a slog through fringe theories of lost civilizations, mysterious structures and neopagan beliefs. (Though I appreciated the fairly even handed review of how these threads link up to creepy neonazi, nationalist, and white supremacist groups in many nations today). Not recommended for the serious scholar or serious hobbyist of Norse and boreal cultures.

The authors do a wonderful job of leaving no stone unturned as they rifle through the existing scholarship, including both hot and lukewarm trails, spinoff cultures, and the connections that make a book like this tantalizing. Moreover, Odin's characteristics are not neglected, which turns out to be the rug that ties the room together.

Siman Vance does an outstanding job as narrator for this book, having somehow the perfect voice, tone and accent to pull it off without ever seeming to be mechanical or dry.

Here there be some serious crackpot ideas

In the first few chapters "collective" human memory and Atlantian myths are front and center. of you're a fan of Bigfoot, Area 51 stories, and legends of the Lochness Monster, this is probably right up your ally. If you're more into actual history, avoid this book.

Will be listening again

This book was an overview that wandered far and near. As a condensation of, and introduction to, Nordic mysticism and Nordic mythology (not a run down of the gods that we all pretty much know, but how they have ebbed and flowed in followers) a lot of ground was covered.

I found myself wishing I had taken notes of all of the various sources mentioned so that I could review them, thus my need to relisten to this book. Some sources seemed credible, others seemed to come out of fringe history. That said there wasn't a lot of value judgement placed on the sources, leaving it up to the listener to do their own research and form their own opinion.

What I really loved was the last chapter that covered the Nordic and "neoNordic" music and their influences starting with Led Zeppelin. Happily my very favorite band, Sigur Rós was mentioned. Other bands from the Faroe Islands, Germany, Scandinavia, and elsewhere have given me some new music to checkout.

Simon Vance is an excellent narrator. I pretty much always enjoy his reading.

Weak theories of the north

Flimsy theories for north being the origin place of many advanced cultures. Evidence for these theories are presented with similar sounding names in mythologies or with names of places, that sound similar to some mythology. Even a north star was used as reasoning for multiple cultures to be originating from one place. I could not finish the book, there was too much of these types of theories in it. I could not trust which were actual proven facts and which were just fantasy. I got only the feeling that some right-wing people might get excited about the ideas in the book. I do not recommend this if you are looking for proven history of the north.

Especially in terms of Greek myths, it seems like he needs more sources. It doesn’t seem very credible to me.

first i was unsure if I would like the subject matter. but this author commanded organization and put something ethereal into perspective. We covered geographic, ethnic, time sequences, and science. chapters were defined in ecopy and title (unlike other books 'title 1, chapter 2')
it's like a professor or instructor...they can make or break the student in presentation. ive got a new realm of interest in folklore and origin stories.

Not at all what I was expecting from the cover, but fascinating and thoroughly researched. Beautifully read by Simon Vance. Would recommend for those who like deep dives. Can't wait to listen again as soon as I finish. And glad to have the whole Easter bunny/Easter egg thing cleared up.

Isn’t it time humans learned to …? I have no idea now; so confused. Mr. Vance is an amazing listen.
Purchased the written version as well; had to see the words that I could not pronounce. Thank you.

McIntosh does a killer job exploring "The Mystic North!"
Folklore, myths, legends, facts, geography, culture, spiritualilty, from past to present day- he does a really great job summing up the birth, death and revival of all things "viking"