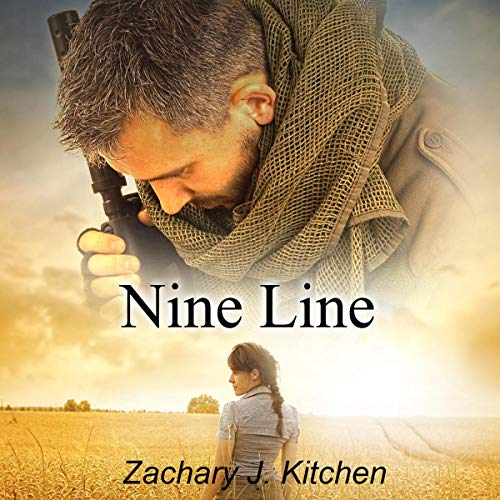 By: Zachary J. Kitchen
Narrated by: Kelli White
Try for £0.00

A nine-line is the standard radio format to evacuate casualties from the battlefield. It is a call for help.

When Nick Patterson signed up for the Navy reserves, he just wanted some money for medical school. He never imagined he’d someday find himself fighting for life and limb in the sands of Iraq. Frustrated by a military bureaucracy he cannot begin to understand and an increasingly pointless war, he doubts why he is there and what he is doing.

When the plucky and idealistic MEDIVAC pilot Samantha Brown crashes into his life, he sees another side to the war. As their friendship grows into something more serious, Nick is faced with a multitude of choices: Should he stay in the military, or go home to the relaxed atmosphere of private practice? Should he play it safe, or step off into the unknown with the daredevil pilot?

What listeners say about Nine Line

I loved Nine Line. It kept me on the edge of my seat from the beginning all the way to the end. There was a little bit of romance in this story but it was mostly about life in the front lines during a war. It was very well written and felt so real. It makes me appreciate what those in the military give up to keep the rest of us safe. Kelli White did an excellent job bringing each and every character to life. I received this audiobook at my request and have voluntarily left this unbiased review.

{I received this book in exchange for an honest review}

I was excited about this book because it may actually be my first romance book written by a male. I was curious. Also, a military romance written by someone who is well versed in the matter...I was intrigued.

I was happily pleased by the writing style, who well the characters were written. However, it is HEAVY in the military and light on the romance. The romance is sweet and definitely there but you have to navigate the military talk to get there.

As an RN this is well written. The author is a doctor and worked in the middle east. Realistic and a very good story. The narrator is perfect too. Highly recommended realistic romance between a MASH doctor and a female helicopter pilot. .

Nine Line was a good read by Zachary J. Kitchen. Nick Patterson signed up for the Navy reserves for some money for medical school. He didn’t think that someday he would find himself fighting for life and limb in Iraq. He begins to have doubts as to why he is there and what he is doing. Samantha Brown is an idealistic MEDIVAC pilot that crashes into Nick’s life. I really enjoyed reading Samantha and Nick’s story and cant wait to read more by the author.

What a wonderful story and it was so well written! The details and medical information was so spot on! I enjoyed the humor also. Nick and Sam had a strong story, I loved it! Kelli White brought it to life with her narration! Don’t miss this war tale.

Nine Line is the kind of book that engulfs you and keeps you on the edge from beginning to end. It takes us on the journey of a military doctor, Nick, who joined the Navy for the education, only to find himself stationed near the front lines. Beginning to be disillusioned by his mission, he finds himself going through the motions, fighting with his overbearing wife on Skype and trying to help a young Iranian boy find a better life. In flies Samantha, a medivac helicopter pilot and now Nick is finding himself thinking of her, his life and what he needs to do. I was completely entrenched in their story. It takes us right into the field, nothing is sugar coated and the story is one that we hear about but never really know how it happens. This gives us that opportunity to see inside, how the war effects different people shapes their decisions. I loved this story and highly recommend it to others.

Kelli White is the narrator, and she nails this performance. It's not an easy one, with many characters and lots of personalities, but she hones in on each one and lets us feel as if we know them. I enjoyed her portrayal and will be looking for more narrations by her.

Nick is a war hero even though he does not think so. Nick is everything you hear about soldiers. He is humble, always worried about his men, and dedicated. Dedicated to his men, the Navy and his wife. Nick and Samantha are thrown together, literally, on numerous occasions. But they are both professional about it. Samantha respects Nick's marriage as well and fights her feelings for them. The only one not dedicated is Nick's wife. Nine Line takes us through a time that civilians can only imagine. As I listened to this book, I felt as if I was there. I could not sleep until I finished this story. Zachary J Kitchen is a new author for me to follow.

This is my first experience with Kelli White. I loved her narration. Ms White has an easy to listen to voice. I got swept I to her narration and became a fly on the wall in the book. Ms. White was able to narrate Nick's complex character and bring him to life. He was strong, and determined yet he had a heart that could be broken. Ms. White brought out the spunk in Samantha. I felt every emotion the characters felt, every struggle and all their pain. Ms White's narration enhanced this story and made it a must listen to.

I really loved this book. It was really well written. It had a great cast of characters, both main and supporting. Samantha was a Badass with a big heart. I just loved her. I loved seeing the growth in Nick through out the story and when he finally found his strength, I cheered.

The story was a very detailed description of life as a deployed military person with a bit of romance in there. There are as some humor and some angst. Overall, it was a very engaging, emotional story that will stay with you for a long time.

I enjoyed the narrator also. I wasn't sure if I liked her at first, but I very quickly came to appreciate how she performed in this book and by the end, I couldn't imagine anyone else doing the job.

I did very much enjoy this book.
I am surprised it’s in the romance category
The war stories and action were great and sad.
What in my opinion would have knocked this book out of the park would have been more of a build up between the characters!
The male in this story didn’t seem to care one way or the other if he had a wife or girlfriend
And only 1 sort of sex scene
That was him being told what to do.

I also wish the narrator was a male
Her voice didn’t help with making him seem wimpy to me
And she sounded like she was either way to close to the mic or chewing gum!

This story totally blew me away. It drew me in and pulled me through all emotions possible. It felt so real. Characters so real and honest. I cried for the souls that didn’t make it and I cheered for the once that did.
Definitely a book I want to read again.
Narration was okay. At first it annoyed me that she was a little to close to the microphone but soon didn’t matter. I would have loved to have a male narrator for the male parts. But all in all an excellent audio book with a fantastic story