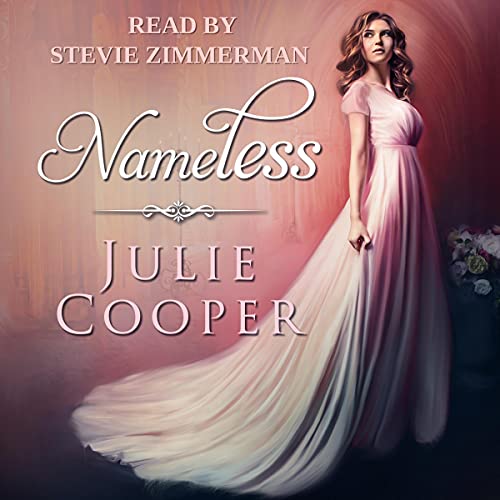 By: Julie Cooper
Narrated by: Stevie Zimmerman
Try for £0.00

“This was not a man who would explode in a rage, or who would give way to shame or temper...which meant my choices were simple: Either he had killed her in cold blood, or he had not killed her at all.”

Orphaned and alone in the world, Elizabeth Bennet has found reasonable contentment as a companion to the dowager countess of Matlock, the affairs of 1811 and Fitzwilliam Darcy long forgotten. But the past intrudes upon her again, and Mr. Darcy returns to her, handsome, wealthy, and widowed, and hiding many secrets beneath his solemn exterior.

But if time had altered their circumstances, one thing remains: Mr. Darcy still wishes to marry her, and this time, Elizabeth consents. At nearly 29, it is inarguably a good prospect for her and indeed, not until they arrive at his vast estate does she realize how large a shadow his late wife will cast over their growing love. But the new Mrs. Darcy’s courage will continue to rise despite the many attempts to intimidate her; and she vows to use whatever power she holds over the master of Pemberley to keep him.

Nameless is a tale of the triumph of good over evil, of passion over prejudice, of loyalty over lies...and most of all, of enduring, unfailing love.

What listeners say about Nameless

Shades of Rebecca flavour this tale of mature love and all that this entails. I loved it!

Very enjoyable. Great story. One of the best PPVs. Well narrated as usual by Stevie Zimmerman

My first impression was a little negative with how much it deviated from canon - Ann De Bourgh is no relation at all and the Earl of Matlock's wife resides at Rosings Park. Colonel Fitzwilliam never enters into the story. My second impression was that it was a bit unrealistic for Darcy to bed Elizabeth on their wedding night given the circumstances and his character. Perhaps if more attention had been given to the lead-up for that situation it would've been more believable. However, it was just given as a statement of fact with no further reflection or explanation. Don't get me wrong, I really do not like graphic sex scenes in my historical romance novels, but I felt it needed a bit more explanation and emotion put into it. Having said all that, it really gets so much better after that! It kept my interest and was a very original storyline.

This was a masterful mash up of Pride and Prejudice and Rebecca. The emotional journey was perfectly paced and hit all of the character growth points that Pride and Prejudice hits but within the Rebecca framework. There are some significant changes to the larger cast of characters from Pride and Prejudice but I didn't mind it once I accustomed myself to it. I teared up when it ended! Such a beautiful and complete journey. I really enjoyed this one, it instantly goes to the top of the list of my favorite Pride and Prejudice variations.

while I figured the jist of the twist pretty early on I have to say that I really enjoyed this story. The different approach to so many of the characters of the original P&P. This story was so creative. of course, Stevie Zimmerman made it all the better. Definitely recommend.

Quite the mystery "who dunit"

Quite an intriguing murder mystery our Mr. D was embroiled in! So many questions and accusations! Well read!

Couldn’t put it down. Wonderful variation, very unpredictable but stays true to the Darcy-Elizabeth love story.

If you are not familiar with the story “Rebecca”, by Daphne du Maurier (not to be missed by the way), this story will be even more engaging.

If, however, you do know the story (even the Academy Award winning movie version by Alfred Hitchcock for example) this is a WONDERFUL mash-up.

Ms Cooper has given us a new set of villains, while still battling with those we JAFF fans have grown to hate. When you then take this well crafted tale and give it to Stevie Zimmerman to perform, it quickly becomes a new one to add to the “favorites “ list.

This story is Very well written and performed. I wish I had the wisdom of this Lizzy!

Very entertaining audible book. It is well written, in my opinion, and as the story unfolds ( I should say stories) I began to wonder why the author put so much in one book. I believe it could have filled three books. And you get Stevie Zimmerman for the narrator. Do not pass up this book.

Wonderful mashup of Pride and Prejudice and Rebecca, but still with originality, depth of character, mature dialogue and insight.
Love it, lost sleep because I just couldn’t stop.
Of course Stevi Zimmerman is flawless in narration. If you love P&P variations with a bit of mystery and darker tones, it is a great one.

Intriguing. Such skilled author. I am still amazed someone could come up with all of it. Amazing. Great Jaff