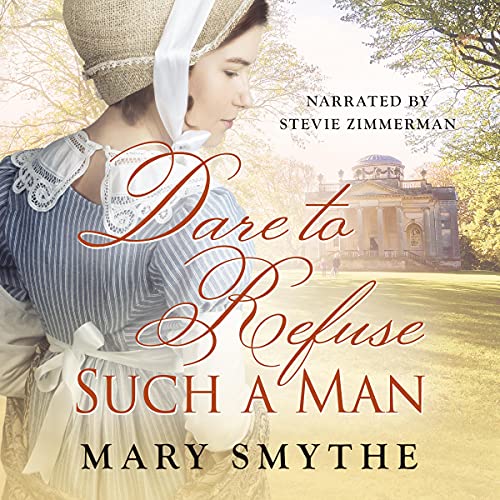 Dare to Refuse Such a Man

By: Mary Smythe
Narrated by: Stevie Zimmerman
Try for £0.00

“He is the kind of man, indeed, to whom I should never dare refuse anything which he condescended to ask.” (Mr. Bennet, Pride and Prejudice Volume III, Chapter 17)

It had never occurred to Fitzwilliam Darcy that once he had chosen a bride, her father might dare to refuse his consent. When his dearest, loveliest Elizabeth is taken from him with only a curt note of explanation, he determines that, far from accepting her father’s rejection of his suit, he must instead find her again and make his case. After all, a woman worthy of being pleased is also worth fighting for.

Several months shy of her majority, it is not so simple a thing to defy Mr. Bennet’s will, but Elizabeth, for the sake of her future happiness, must try. With various allies in her corner, as well as foes standing against her, Elizabeth’s courage must rise against all attempts at intimidation. Even from her own, much beloved father.

What listeners say about Dare to Refuse Such a Man

What a Wonderful Surprise

This book starts off with a series of surprises for JAFF readers, but it results in a wonderful storyline that is fresh, yet familiar.

The first thing that convinced me to give this author, that was new to me, a try was that it was narrated by Stevie Zimmerman. Aside from one minor editing issue in a later chapter, not her fault 😀, listening to this story was, as usual, enhanced by her reading. She has a distinct, believable, voice for each character and her delivery is excellent throughout.

I am adding this to my “favorites” as it was more than worth the credit and will be another I could listen to again.

I finished this in a day. I liked the approach that the author took in regards to Mrs. Bennett and the younger girls. There was a solidarity and a sense of real affection that most variations tend to say exists but never show. Mrs. Bennett especially is given some positive attention and is allowed to shine in a way that still feels true to the character. There are no dramatic misunderstandings between Darcy and Elizabeth since they actually communicate with and have faith in each other.

As always, Stevie Zimmerman gives a perfect performance. She is my favorite narrator.

In this version, Mr. Bennett is at his most selfish and stubborn and it creates PROBLEMS. Because I don't currently need anymore problems, this created a problem for me. I ended up popping over to Kindle where the book is on KU and searching various terms like BETROTHED to make sure there actually would be a HEA (there is) and whether or not Mr. Bennett would face some consequences because I hate it when a character is a complete jerk for an extended period and is forgiven on the basis of a weak apology (he does face consequences, and they are appropriate to his actions).

In the end, listening to the book was more than "my nerves" could take, so although I did end up reading about 70% of the book, (I skipped chapters 3-9, which is Elizabeth's and Darcy's courtship prior to his intended first proposal--which he doesn't actually get to do because Mr. Bennett is a jerk) I didn't do it at all in order. I can say it is a clever reimagining and recommend it to readers who are looking for something that elicits nail biting.

Zimmerman's Darcy was a scratchier than normal in places, but otherwise she did her usual strong performance.

A few spoilers as I go into more detail about what you can look forward to in this version.

Lady Catherine is as bad as ever, and Collins is worse (which just makes Mr. Bennet's actions worse), but Mrs. Bennett is on Lizzie's side, and in a manner that successfully foils Mr. Bennett more than once. She is still Mrs. Bennett, (after popping off at Collins for his treatment of Lizzie, she still needs a lie down, smelling salts, three servants and two daughters for her nerves--but she defended Lizzie first) but a better one. (Who also had the sense to know immediately that if her daughter marries Darcy, Collins is no longer necessary for her future happiness and security.) I liked her better in this version.

MEH. Good but lacking for me.

I got bored with the story and had to listen to it on 1.60 speed. The story followed along somewhat with the book except Elizabeth and Darcy were in love from the start and her father and Collins were the ones keeping them apart. The story really is more involved with Mr Collins , Elizabeth, Mr Bennett and Mrs Bennett. I wouldn't advise on getting this book unless you have them money to spare. Nothing new of course as with all JAFF books, but who cares about Mr Collins and Mr Bennett issues.

I loved the book. It explores the relationship between Elizabeth and her father when he refuses her engagement to Darcy. It was easy to read, engaging without too much angst.

Dare to Refuse Such a Man

Great story. I really didn't like Mr. Bennett's character. But was glad that Mrs. Bennet finally stood up for herself and Lizzie. As always Stevie Zimmerman was great. She is the best narrator.

An interesting story, very well wand narrated. I liked the premise that Darcy and Elizabeth were already in love and kept apart by the will of her father. I had no problem with Me Bennet's attitude in this story, it was unlike the original but showed the absolute powers of a father over an underage daughter very well.
Stevie Zimmerman 's narration flawless as usual.

I quite enjoyed this story but really disliked Mr Bennett's petulant nature, his cruelty towards his declared favorite, his selfishness and his arrogance.

The story itself is good and well thought out. I like the way Smythe portrays the Bennett family. The performance by Zimmerman is excellent as always. There is a spot on the audio though that got missed during editing. In chapter 30 around 7:30 a small blip happens but it’s over in a few seconds and none of the story is missed.