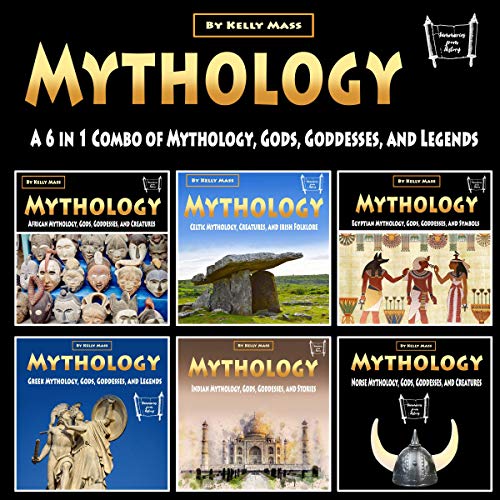 By: Kelly Mass
Narrated by: Miriam Webster
Try for £0.00

This may just be your lucky day, since you are looking at the bundle of six different books that comprise stories of mythology and historical facts about several fascinating ancient societies. These are the titles:

African Mythology: This book is committed to checking out the gods and goddesses that the people on the African continent worshiped, and within the audiobook, you will find more info about:

Celtic Mythology: In this guide to Celtic mythology, several stories are not only outlined, but narrated elaborately. Others are quickly mentioned, and some historical background about the Celts, Irish, and Scottish is provided to set the stage.

Egyptian Mythology: This is an extensive guide to the world of Egyptian mythology. Both cultural background and historical events will be helping you on your journey of understanding the way the Egyptians of old lived and the things they believed. As you read about gods, goddesses, creatures, monsters, and dilemmas of everyday worship, you will get a greater comprehension of the most important aspects of this ancient civilization.

Greek Mythology: You’ll learn about all the best-known ones, like Zeus, Aphrodite, and Heracles, but also about the lesser-known ones, like Hephaestus, Cadmus, and Ion. All the most important stories and backgrounds are in here: the complicated relationships, the drama, the vengeance, the quests, and lots, lots more! Get ready for a treat!

Indian Mythology: Have you ever wondered about the gods and goddesses in the Hindu religion? Have you wondered about what goes on in a country where over a billion people live? Well, you’re at the right place. In this comprehensive guide to Indian mythology, you will read or listen to various aspects of what they used to worship and still worship in this sub-continent with its vast history. You will read about the Hindu epics and stories, the deities in their respective forms, and so much more.

Viking Mythology: This book is an extensive take a look at the Viking age, and the deeds and lives of these ancient, in some cases strange individuals. The Vikings of Scandinavia were brave, adventurous, and frequently barbaric, but there can be no dispute that they were also a people with huge goals. Viking culture is still a topic of interest today, and this uses an insight into simply how withstanding their legacy is.

What listeners say about Mythology

Sadly it was returned only a few minutes in, I'm sure the stories are well researched and put together but the narrator can't pronounce the simplest of words, it's she sounds like an AI voice, it's simply not listenable.
Eg. 'Madagascar' is pronounced 'Mada-gas-kaaar, and I stopped when she pronounced 'Niche' as 'Nitch'.
Very dissaponted

On the surface this book looked like a real winner. Great reviews. 36 hours of pure mythological gold. 6 books in 1, 'Today must be your lucky day', etc. My experience was very different. The content is actually good stuff, and has potential, but it seems to need some rather serious editing. For example, it launches straight in, without any introduction, giving me in 5 minutes 10 African myths, which went by so fast that I can't remember a single one. Then there was the grammar which at times began to grate on me. I doubt this is the failure of the narrator, probably rather with Kelly Mass' style of writing, which at times could be a bit too questionably colloquial.

Notwithstanding, the narration was poor. It's seemingly read without much understanding, almost as if the narrator is just looking at the words and pronouncing them, a bit like a robot. There are also mistakes the narrator makes, which become really difficult to ignore. The recording quality was a significant let down for such an expensive audio book, that was my first indication that this might have been a badly spent credit.

To be blunt, this is the kind of quality audio book I would expect from Librovox, not from Audible.

There's no way I could listen to all 36 hours of this. It's a return I'm afraid. Check out the 'Myths and Legends' podcast instead.

being from Ireland I skipped to the irish chapters and listened for not very long. the narrator is terrible. pronunciation of names and places are painful to hear. I know the irish language is difficult to read and pronounce but a little research will give you the sounds of the words. the narrator also hesitates and at one point corrected herself. I bought the book with the hopes of passing on some of the knowledge but how can I if I don't hear the correct words? I'm sure it is a wonderful book to read but as an audiobook read by this woman I am sadly done with it already. I was looking forward to listening to 30+ hours and judging by the high ratings I thought it would be enjoyable. maybe I'm the only irish person that's bought it? I'm sorry but I honestly cannot believe that anyone could give this book 5 stars

Doesn't deserve anything less than 5 stars

I guess I could go over each one of these books and mention all the strong points and the few weaknesses. I'm not a professional reviewer, so sorry, but that would take an eternity to figure all out to me, so I am just going to leave it at a few bullet points.

- First, the value. It's almost 37 hours. What else can I say? Get a credit and get it.
- Second, the interesting fact that all these stories have their own twists, their own cultural backgrounds, etc. But in a sense, some of the gods and goddesses share some commonalities. For example, most of these cultures have a fertility god or goddesses, a main god, a god of death, of creation, and all the main themes. And then there are the creatures, the fairies, the spirits, and the legendary heroes. Very much fun to listen to. It sparks the imagination. Strange to me that people believed these kinds of things, but then again, it might not be so different from believing anything invisible, including our own belief in an almighty God somewhere in the universe.
- Third, the narration was great. I mean, it wasn't perfect. But I liked it.
- Fourth, I cannot even begin to mention how much time it must have taken to put a bundle together like that. Doing so goes to show how much this author or publisher respects its customers.
- Fifth, I knew about Greek gods, something about Viking gods, etc. But Indian ones and Egyptian ones were pretty strange and new to me. This is another reason why I enjoyed it. It's like learning something I didn't already know.

Liked it a lot

I listened to this audiobook, and it was definitely motivational. Not only did this audiobook seem like it was top quality, but it also showed me essential things about daily life, and about this theme in particular, of course. So, it absolutely deserves a couple of hard-earned stars.

All the myths combined

Yes, makes sense. Why not bundle all the books in one? Maybe because that gives you a too-good-to-be-true deal if you have a credit? Man, how is this author make her money back from that? I don't know how it all works, but I do know when I see a good deal, such as this one.

A lot of good information.

How can I not? It's got all those myths and gods and... yeah, it's great. It is what it says it is, no less. No deception there. It's truly all the mythological stories and backgrounds of the cultures of these countries.