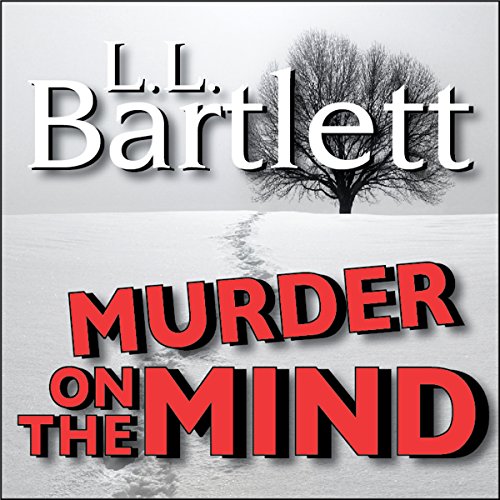 Murder on the Mind

Jeff Resnick hardly knew his well-heeled half-brother. But after suffering a fractured skull in a vicious mugging, he reluctantly accepts the fact that he has a long and brutal recovery to face - and his closest of kin can provide him with the time and place to do it.

Now, Jeff is haunted by unexplained visions of a heinous crime - a banker, stalked, killed, and eviscerated like a 10-point buck. When Matt Sumner's murder is discovered, a still-recovering Jeff realizes this was what he had seen. Jeff must not only convince himself of his new-found psychic ability, but also his skeptical brother, Richard Alpert. Since Sumner was Richard's banker, both brothers have a stake in finding out what happened. With Richard's reluctant help, Jeff's investigation leads him to Sumner's belligerent family and hard-nosed business associates, none of whom want him snooping around.

When Jeff discovers a second victim, he knows he must relentlessly chase his quarry - even if it means risking his brother's life.

What listeners say about Murder on the Mind

Murder On The Mind

If you could sum up Murder on the Mind in three words, what would they be?

Have you listened to any of Steven Barnett’s other performances before? How does this one compare?

yes
I really enjoyed the audio. Steven Barnett really bring the characters to life and the relationship between Jeff and Richard.

This story is well written with believable characters.

I would and will be recommending it as it is an excellent story and wonderful narration.

What was one of the most memorable moments of Murder on the Mind?

One of the most memorable moments was when Jeff convinced his brother to go hunt for the dead man's viscera with him, knowing he couldn't shovel.

Have you listened to any of Steven Barnett’s other performances before? How does this one compare?

Yes, I have listened to other Steven Barnett performances, and this is one of my favorite.

I tried to listen to it in on sitting.

Good first book in the series.

Where does Murder on the Mind rank among all the audiobooks you’ve listened to so far?

As this is the only suspense audio I've read so far, I can't accurately compare it to any I've listened to in another genre as far as a story goes. Comparing quality, I'd say it was very professional. A few I've listened to were not done as well; story or narration.

He did a very good job of distinguishing the different characters.

I will recommend this audiobook to everyone I know. It is one of the very best audiobooks I have ever listened, and I will listen to it again and again.

The author hooked me on the story from the first chapter on. Her story really seemed possible, and the visions that Jeff had were scary and creepy.

I think my favorite scene was when Jeff and Richard are going out to the place that the body parts are located, and Richard finally gets an inkling that Jeff might be shooting straight with him.

There were several, and I loved all the characters in the book. Mainly, the scenes between Jeff and Richard, slowly getting to know each other after being apart for so many years. They were the type of scenes that anyone who has been estranged from a family member could feel just by listening.

Steven Barnett is so very perfect for this series. I have had audiobooks where the reader just does an okay job, which doesn't make the story more real for the reader and listener. Steven is absolutely superb in his portrayals and I am so happy y'all found him for Ms. Barnett's books. I will be getting the rest of these books in the series.

Would you consider the audio edition of Murder on the Mind to be better than the print version?

I enjoyed listening to the narrator change from one Character to another. The story kept me interested and I am excited to start the next book.

Yes! No only is the book an excellent first book in a great series, the narrator is phenomenal. I LOVE listening to Steven.

What was one of the most memorable moments of Murder on the Mind?

When Jeff got badly beaten.

His voice, it's just so good. I like the way he's able to make you feel like you're listening to a room full of people.

When Jeff got badly beaten. I can't stand the thought of him getting beat, but it's what makes his character special.

Poor Jeff! I immediately fell in love with Jeff because of all of his problems. Thankfully he has his brother to help him, and his psychic ability, which he puts to good use in knowing about some crimes. I think you will love Jeff, and Richard, too.

Great Mystery with some Psychic Visions !!

I really enjoyed this audio version of this book. The narrator did an excellent job and made me not want to stop listening. The author drew the characters and relationships (especially between the brothers) to make you want to know more about them. Is Jeff psychic?...

Murder on the mind

It was a good book wasa little confusing at times but I liked it. Definitely will read more by this author