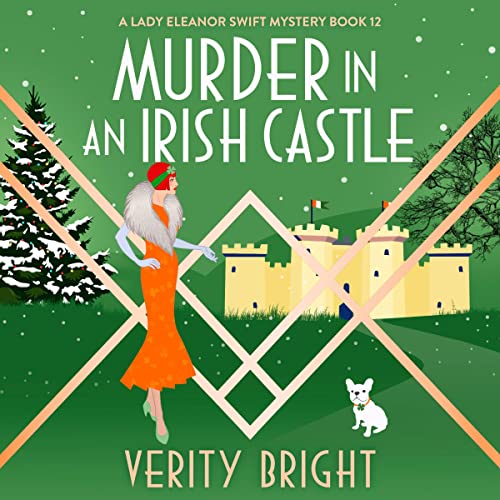 Murder in an Irish Castle

By: Verity Bright
Narrated by: Karen Cass
Try for £0.00

Christmas, 1923. Lady Eleanor Swift has received a rather unexpected invitation to the village Christmas party in the tiny, rural hamlet of Derrydee in the west of Ireland. Eleanor is thrilled about exploring her ancestral roots at her late uncle’s estate and spending the festive season in a castle. Packing Gladstone the bulldog’s coziest Christmas jumper, they set off to the Emerald Isle with her butler Clifford in tow.

Arriving late at night, Eleanor and Clifford are shocked when they find a body sprawled in the snow on the winding country lane outside the estate. The local constable is immediately suspicious and all but accuses the pair of murder. This isn’t the warm Irish welcome Eleanor imagined!

Clifford is certain he recognizes the poor fellow from the funeral of Eleanor’s uncle–but what was their connection? Undeterred by the villagers’ lack of gossip on the matter, Eleanor is determined to get justice for the victim. The man’s pockets are suspiciously empty of personal effects, but closer inspection reveals an old key hidden in the heel of his boot. Could this unlock more than one mystery for Eleanor?

But when a fire breaks out at the castle on Christmas Eve, an even bigger question looms: Is someone out to ensure the family line dies with Lady Swift? And will Eleanor’s first Irish Christmas be her last?

What listeners say about Murder in an Irish Castle

Can’t say how pleased I am that I’ve finished this book - only kept listening thinking that it had to get better.
I’m afraid that the narration was the worst I’ve ever heard.

I'm afraid this hasn't appealed at all. Boring. And a sad lack of real knowledge of Ireland and its history. For example: the Civil War was fought over the issue of The Treaty. The issue of the border and the Boundary Commission is, as you might expect, a complex issue but definitely not helped by the British, as ever. Sorry.

It was an easy story to pick up and follow.I enjoyed it.I found it funny how scandalized the butler was with his mistress.

No lady at that time would be ignorant of the importance of good grammar. In fact even now anyone not raised by wolves would make a better stab at correct speech than this author. Even if the protagonist were not a titled lady the blunders would jar. Editor, what were you thinking?

Another wonderful Lady Swift Novel, I love this series, utterly wonderful. Lovely ending, Eleanor and Clifford are an enchanting Duo.

Worst listen ever. please do not waste your time.

Dreadful storyline and even worse, totally racist. Trust me, if your Irish or of Irish decent you will want to steer clear of the book and most definitely this author.

I quite enjoyed this book, a bit different to the usual cosy book. The language was sharp and amusing and the narrator good. Silly, I know but it irked me that the dog on the cover is a French bull dog whereas the dog described in the book sounds more like a British bill dog.

I love this series of books, they are fun, the main character indomitable, yet charming and delightful, the stories well crafted and very satisfying and this new story hits the mark again.

The book is beautifully read, Karen Cass is an outstanding narrator with excellent characterisation and perfect pace making her reading the only person who can read these stories for me.

I truly enjoyed the story but you can read the summary in the details so I won’t add my own. Just know if you love the murder mystery genre set in the 1920’s, you will love this and all the other ones in the series.

One last thing, at the end of all the books is a fascinating history section wrapped around the story. Brilliant, I do hope this continues.

I love these books. I actually prefer to listen as the narrator is so good.

The authors have developed the main characters well, and this story is their finest adventure yet.

I love this series and can’t wait for the next one! I drive 4 hours every week to see my elderly mother and listen to every book over the year. It makes a difficult drive something I look forward to!

Seldon may not have been in this story; however, this intriguing series is all about the solving of a murder by Lady Swift and Clifford. I venture we will see future ventures that will no doubt involve Seldon, Eleanor and Clifford solving new mysteries. Can hardly wait for the next in series!😺

I absolutely love Eleanor and Clifford's murder adventures!! I love all these stories! I can't wait for the next book!

Normally I adore these books, but this one was really slow to develop. Felt like the author had a minimum words requirement in her contract. Once it got going, it was a good story and filled in some background for us. Just not the author’s best work.

One of my favorite authors but this book just couldn't keep my interest or attention. It wasn't till the end that it became the wonderful mystery series that I love.

I usually love these books and was so excited for the new one. While I loved Clifford and Gladstone and Lady Swift’s interactions, this one lacked the fun dialogue and broader relationships of the other books. I missed Ms. Butters and Polly and the rest of the regular characters; but I especially missed the interactions between Elenor and Hugh. The last book barely had him in it and this one not at all. All in all it was an okay read but I really hope the next one has more of the characters I love.

Too much repetition of details

I love the characters and the relationship between Clifford and his Lady, but this one drug on a bit much with constant reviews. I will “read” others as I am hooked on the series, but I long to see more romance between Hugh and the reluctant Baroness!

I love this series!

The narrator was on point with her performance. I could see in my minds eye the characters. I love the relationships and of coarse Master Gladsten. Hurry with our next adventure!

This series never disappoints. I absolutely love the authors word crafting and her whit in dialogue, her main characters are well-spoken. The narrator has a wonderful voice, beautifully bringing the characters to life. Intelligently written and beautifully narrated.