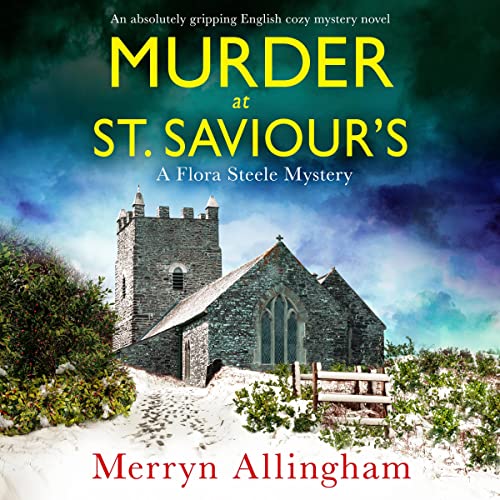 By: Merryn Allingham
Narrated by: Charlie Norfolk
Try for £0.00

Bookshop owner and amateur detective Flora Steele teams up with handsome crime writer Jack Carrington to unravel a curious murder in the village of Abbeymead!

Sussex, 1956: When Flora and her partner in crime solving, Jack, arrive at the charming church of St Saviour’s, the last thing they’re expecting to find is the curate, Lyle Beaumont, lifeless on the flagstone floor beneath the bell tower, with a mysterious note in his hand.

Flora is dismayed to find the poor curate dead. But she can’t help being intrigued by the eclectic mix of bell ringers present at the old church–Mr. Preece, the local butcher, Dilys Fuller, the busybody postmistress, and Stephen Henshall, a newcomer to the closeknit community. Any one of them could be the culprit–and Flora needs to act fast before someone gets away with murder....

When Flora and Jack begin their sleuthing, they quickly realize all is not what it seems with the victim, and the certainty of the dead man’s identity becomes the first twist in the investigation.

Just as they’re getting closer to the answer, the death of one of the suspects changes everything. As a series of unexplained accidents unfolds across the village, it seems no one who was present at the church on the night of the curate’s demise is safe.

Has the bell tolled on Flora and Jack’s detective days? And will they work out the truth in time to save themselves?

What listeners say about Murder at St Saviour’s

Love these murder mysteries, so cosy and quaint from the 1950s in the south of England. And of course at the heart of it all, Flora and Jack’s developing relationship… More please! X

I've read and enjoyed all the previous books in the series but found this one to be quite confusing and the storyline not so good. hope the next one gets back on track

This is the fifth entry in the Flora Steele series. The standard is as high as ever. Plenty of twists and turns to the plot and nicely developed relationship between Flora and Jack. It’s a ‘cosy’ mystery with the ideal village setting and interesting characters. It mostly avoids those rather silly/ far fetched episodes that other ‘cosy’ series indulge in with a amateur sleuths. I would recommend this series to anyone who enjoys intelligent, but not gritty, graphic crime novels.

Really enjoyed this book and love that I've listened to them in order, although they could stand alone.
It's a murder mystery but not dark, more on a par with Agatha Christie. Looking forward to the sixth book and seeing what happens in everyone's lives.

Another great flora and jack mystery!

Great narration and another fab mystery from jack and flora. Nicely setting up the mystery for another book too! Very enjoyable Christmas time mystery.

Having really enjoyed the previous books in the series I was excited to see a recent release. However, I found the story rather rambling and it did not hold my attention, I even nodded off several times when listening.
I gave up after chapter twelve.

Loved the book, beautifully read and so look forward to the next book.
Thank you.

Gets better by the book

A very nice option for a cozy mystery: less cozy but more interesting than other series with a good dose of history and still enough personal investment of the actors in the story to get a feel for it. It’s easy to time travel listening to the audiobook to a time so much different to what we know and experience but still with crimes not so much different. There is wit and humour but also suspense and excitement and a nice dose of sleuthing the old fashioned way. It’s fascinating that without the help of modern technic the crimes are not that much different in origin, villain and motives than in high action killings of modern stories. This series deserves a lot more stories and I’m glad there will be more following. The narration is good but takes a while to get used to as the male voices often drift to much into high pitches but with some slower speed it is better to distinguish after a few chapters.

Least favorite of the series

I found myself having difficulty keeping up with all the characters. At the end when the killer was identified, I still wasn't sure how all the players fit together. I still enjoyed the book and am happy the relationship between Flora and Jack finally moved forward.