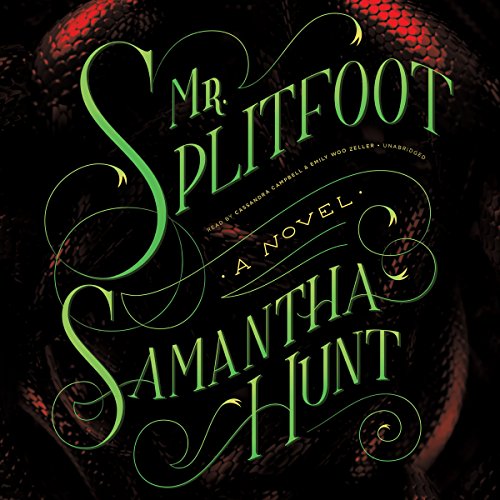 A contemporary Gothic from an author in the company of Kelly Link and Aimee Bender, Mr. Splitfoot tracks two women in two times as they march toward a mysterious reckoning.

Ruth and Nat are orphans packed into a house full of abandoned children run by a religious fanatic. To entertain their siblings, they channel the dead. Decades later Ruth's niece, Cora, finds herself accidentally pregnant. After years of absence, Aunt Ruth appears, mute and full of intention. She is on a mysterious mission, leading Cora on an odyssey across the entire state of New York on foot. Where is Ruth taking them? Where has she been? And who - or what - has she hidden in the woods at the end of the road?

In an ingeniously structured dual narrative, two separate timelines move toward the same point of crisis. Their merging will upend and reinvent the whole. A subversive ghost story that is carefully plotted and elegantly constructed, Mr. Splitfoot will set your heart racing and your brain churning. Mysteries abound, criminals roam free, utopian communities show their age, and the mundane world intrudes on the supernatural - and vice versa.

What listeners say about Mr. Splitfoot

I've never been a fan of books that take you forward and back but this was very well written IMHO. I managed to follow what was going on, who was who and back to my usual forte of guessing/solving who and what the end would be less than a third of the way through! This in no way means it's not a great story because it is, the narration was enjoyable and I enjoyed it, even though I'd usually give up half way as I lose my consent ration and soon become lost, but not this time. That's a feat in itself lol. I may even listen to it again.

What a journey, I cried my eyes out at the end. This book needs to be made into a film so everyone can experience it, I really enjoyed this book.


Ms. Hunt...I'm not sure how to react to your book other than to say, hmmm, it was interesting...(like they say, "your mother's meatloaf is *interesting*"). Not sure what the hell was going on. It was like running in a dream where your feet don't touch the ground -- but then there is a passage in the book where the characters do just that. Or like being really stoned at the dentist and thinking you've solved world peace and then the gas wears off; or driving down the road when you notice you suddenly don't know how you got where you are; or listening to 11 hrs of an audio book and wondering if the LSD you took in your wild youth really is stored in your spinal column and just got knocked loose... Freaked me out, so I resorted to the experts.

"What keeps all this engaging — beyond the real charm of these two young people — is the way Hunt refuses to let any conclusions solidify in her wry prose." [Wash. Post] Read that last little portion of the quote again....Ehhh... I'm not convinced they know what the hell either. They wrote some very nice things about your book, loved the prose, which made me feel a little bit better about myself, a little less obtuse, because I too loved the prose. Which brings me to how the hell I came about picking your book. I saw the title somewhere in a S. King interview; again it was suggested to me by Audible; again a friend said I needed to read; and I enjoy me some supernatural Gothic occasionally, especially those that are "evil...fru-its of the devil" [Mike Meyers]. Splitfoot sounds like the reportedly cloven-hoofed Beelzebub, the cover looks like the wily garden serpent, voila. And here I am finished and I'm still not sure whether or not your Mardellion is supposed to be Mephistopheles.

A very encourage ing reviewer said..."the novel moves not just in two time frames, told through two voices, a first-­person narrator and a third, but also moves in the fourth dimension."[NYTimes] I suspect my own literary shortcomings, but have to tell you that I've transcended the temporal and spatial interpretations of the fourth dimension with Proust, H.G.Wells, Dostoevsky, Joseph Conrad and Ford Madox Ford more soberly. And, I love a good mash-up: future past and present; fact and fiction; science and supernatural...throw in some religious dogma, and I'm in Mitchell heaven. Mix you did! From L. Ron, to Joseph Smith, to aliens, Carl, Sagan, to a comet that hit the US, to a Comet-cleanser snorting cult leader *deep breath* golden plates to the Voyager Golden Records.

I can't really write I review of a book that leaves me wondering, WTH? So, I'm taking some of your words as advice...“There isn’t any point to it,” complains Cora, mid-journey. “I’m not getting anywhere. No start, middle, or end.”
Call me Cora.

Not the gothic for me

On paper this should have been my new favorite book with the religious fundamentalism and cults and Kelly Link comparisons but I struggled to get through the book and spent most of the middle bored and looking for patterns.
I bumped it up to 3 stars because I enjoyed the ending despite seeing the plot twist miles from the end.
I also have given up on books narrated by Cassandra Campbell; her tone of voice hear made me think of a disgruntled librarian and I just can't anymore.

I was excited about this one and super let-down. Nothing happens, it just goes in circles, and the voice of Ruth was so airy and irritating I found myself yelling at it

I love this book!

I heard an interview with the author on Studio 360 and tried to get the Audible version. Too soon. So I read it on Kindle. Hated to lose the characters so I ordered it on Audible. Even better the second time. Great writing, well performed. You will often have to stop because a sentence is so powerful or beautifully written.These characters and their story are still with me. Now, added to my favorite books list.

Maybe I could say the novel is a long and lively stew brewed up by a playful witch, after oversleeping her nap at the credibility gap.

This was a decent read, I enjoyed listening to it. I’m giving it four stars because the author did a great job building up a good story but, it fell flat at the very end. It was almost as if she wrote herself into a corner and then couldn’t come up with an ending that matched the hype. Still, I recommend this book despite the lackluster finish. The writing style is interesting and I was kept in suspense which, to me, means the story is worth a listen.

This book is absolutely awful. It’s so awful that I actually feel insulted and angry reading it. It’s not vile in the sense that it is gory or even scary. It’s just poorly written with a absolutely stupid plot and needlessly vulgar and sexual- especially towards children. I wish I could return it but audible is stingy now with how often you can return titles. Save your money people unless your out of toilet paper.

Absolutely loved this story! The narrators were wonderful at weaving the stories of these two amazing women together.

unique story with interesting clues strewn along the way. will probably relisten more than once.

Entirely original take on a ghost story. I loved it, and am a big fan of Samantha Hunt's gorgeous language, punctuated with her very unique sharp, dark wit. This story had everything for me - plot, style, and characters I could hold hands with.