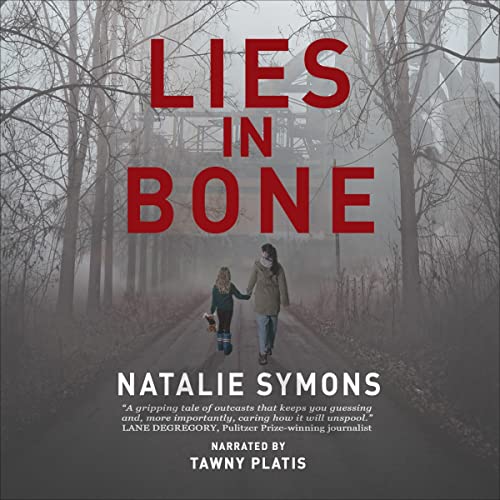 By: Natalie Symons
Narrated by: Tawny Platis
Try for £0.00

Told by a tart-tongued young woman with a love of Bruce Springsteen, Lies in Bone is at once a mystery and a coming-of-age tale fueled by dark secrets involving love, murder, and the truths worth lying for.

On Halloween 1963, 11-year-old Chuck Coolidge and his brother, Danny, are lost in a toxic smog covering the steel town of Slippery Elm, Pennsylvania. When the smog lifts, half the town is sick, and 20 people are dead. And Danny is missing. Now, more than 20 years later, Chuck's teenage daughter, Frank, plots her escape from this "busted and disgusted" town.

When a murdered child is found in the river, investigators link the crime to the disappearance of Danny in '63, and Frank's life is turned upside down. In the face of her worst fears, she must uncover her family's dark past if she wants to keep her sister, Boots, from the hands of the state.

As she discovers the unimaginable truth about Danny's disappearance, Lies in Bone culminates in a shocking 11th-hour reveal and an emotionally charged finale.

What listeners say about Lies in Bone

Difficult to put my finger on it

The story is vaguely interesting however fairly predictable.

The narration is slow, moody with very little inflection or excitement. It feels like someone reading a story late at night trying not to be heard. The reader uses the same tempo throughout the book making it difficult to stay interested. Even the more gruesome scenes come across boring.
The narration makes it difficult to have any connection with the main character Frank who goes through some fairly extreme and emotional experiences. Although the character is broody she does exhibit more emotions with the narration doesn’t capture. The character Bernie is read very well however her part is small.

Overall I struggled to the end of this book, it didn’t translate well as an audio book and I wish I’d read it rather than listened. That way I would have created my own connection with Frank.

4.5⭐️⭐️⭐️⭐️
.
.
.
.
.
Thankyou #netgalley #nataliesymons #boyleanddalton for the arc copy of this book for a honest review .

.
.
.
.
- Frank was the most love character I’m this story , yes he is rebellious and foul mouthed, but when he accept his mother’s forgiveness, I become soft and loving the character all along .
- heavy and emotional thriller. Not any kind of genre that is straight to the point of mystery and crime, it has a original writing to it that makes you wondering how and why.
- not my typical go to book but this was a great story.

Loved this bittersweet story. Kept me hooked to the final word. Great narration made it easy to listen to.

Reminiscent of ‘Where the Crawdags Sing’

I really enjoyed this book.
It had echoes of the same motion of ‘where the Crawdags sing’. I think this was also because of the beautiful lilting narration of Tawny Platis.
I was totally absorbed in the story from the beginning to the end.
Highly recommended

"The Brady Bunch, only Silent Hill - two kids confirmed dead, one missing, and one just sits in the corner, staring at the wall. He softly sings lullabyes when you spoon-feed him,"

Natalie Symons' writing is both immersive and disturbing, in part because these people are believable. I feel like I've been in desperate places like the town of Slippery Elm, where winters aren't lovely clouds of puffy white snowflakes but instead seem to punctuate the hard cold with wet gray slush the color of the stillborn sky. Very strong Stephen King vibes that grow the more you learn about the darkness that has engulfed this town and everybody in it.

The narrator Tawny Platis has a taut delivery that keeps your attention. She voices distinct characters and the kids really stand out as particularly good performances--Chuck and dAnny sound like their ages, as does "Boots", younger sister to the main character "Frank" (Francis). The audiobook feels like that perfect convergence of an author who knows how to weave a thick aesthetic and a narrator who "gets it" and knows how to make that aesthetic come out in the recording.

This title does not have musical flourishes or sound effects - it's just you and the narrator. It's perfect for this kind of story and the narration.

Narration should be believable...

and it absolutely was! Tawny did a stellar job of bringing these characters to life. The story is great with imagery I had no trouble picturing as I listened. If I didn't know better, I may think Tawny is actually regaling us with stories of her actual life. That means the writing is top notch and the performance is on point, and then some. Well done, Natalie and Tawny!

Not my usual story, but damn!

This was way outside my usual realm of fantasy/sci-fi, but I have become a fan of Tawny Platis over the last couple of years, so I decided to give it a shot. I expected an awesome voice performance and was not disappointed, and the story! I was repeatedly surprised, disgusted, and enthralled by the story of Frank and family (I did think Boots could have been a little more 3 dimensional) and will be looking for more by this author.

This story had me hooked and the narrator’s performance was outstanding. Highly recommend to anyone who like mysteries filled with twists and turns and beautifully flawed characters.

The narration almost ruined this for me

I had to move to the written version because the narration cheapened the story for me.

First off, it’s a fairly depressing book— but most good literature derived from twisted tales.

The beginning felt very long and drawn out to get to the point you knew you eventually would. Even the twist at the end wasn’t unpredicted.

I really like the narrator, literally saw her on TikTok so I boroughs the book up. However I don’t know if it’s editing (I don’t know how these things are edited and out together ) or the voice actress— some of her characters fluctuated too much and I would get confused on who was “talking” for a hot second. Specifically the character Ray was all over the place.

All in all, still worth a listen.

A captivating story with many twists and turns. It's beautifully narrated !!! I highly recommend this book, especially the audible version!!!

Came for the narrator stayed for the story!

I really enjoyed this book! I saw the narrator on Instagram and decided to give this book a listen and I was not disappointed! Really great story and the narration is awesome! I

A must read! This book destroyed me at times.

This book was amazing, to say the least. The entire story was so creative, so well told, and just an absolute emotional rollercoaster. The narrator did an amazing job; I was beyond invested. I don't normally cry reading a book, but I sobbed at parts of this book. That's just how invested it had me in its characters and their stories. I'll be looking for more books by both the author and the narrator.