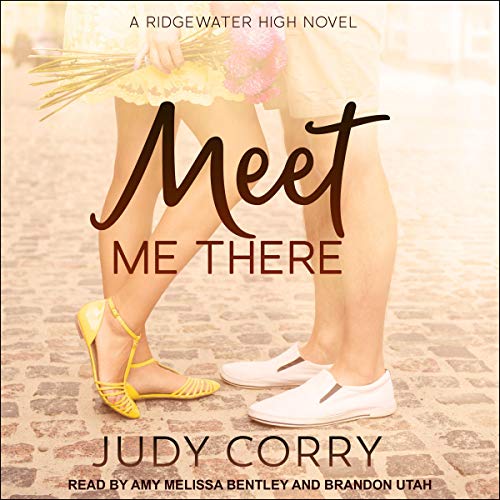 A dark Chemistry lab. A fake British accent. It's all fun and games until somebody falls in love.

When 16-year-old, Ashlyn Brooks, runs into a sweet British guy in the dark Chemistry lab, she has no idea she's actually sitting in the pitch black room with her longtime rival, Luke Davenport. She also doesn't know that she's stepped into another one of the football captain's pranks. It isn't long before she's sharing things she's never told anyone, and starting to fall for the mysterious guy with a sexy accent who seems to understand her in a way no one ever has before.

When Luke's mom dies the summer before his senior year, he turns to pranking Ashlyn to keep his mind off his loss. But the more he gets to know her, the more he regrets using his fake British accent in the first place. Soon Luke is walking the thin line of keeping his lies a secret and wishing he could tell her that the boy she's falling for is really him.

What listeners say about Meet Me There

Enjoyed It So Much

LOVED LOVED LOOOOVVEDD, this was so cute my heart will burst <3 .. it's so good and the relationship between Ashlyn and Luke is just adorable .. if you liked P S I like you by Kasie west you will like this book
it's about a girl who 'meets' a guy in a dark chemistry lab.. but little did she know that this guy is actually her enemy !! .. she is struggling between hating the 'real' Luke and liking ' British Guy ' who is also Luke .. and you'll see what will happen
it's light and fluffy and minimal drama there
The narration was sooo on point specially the male narrator .. definitely recommend this audio

loved this story so sweet

I really enjoyed the story it was so cute. The only thing that bothered me in the beginning was that each of the narrator's was really bad at doing voices for the opposite sex but good at their own. but after a while I just heard the other narrator's voice instead. such a sweet story though really liked it.

I was really excited about this book. The description was interesting, and story line was realistic. However, it turn out to be disappointing maybe because of the high expectations. The story and the characters never developed properly. At times it was really emotional and had a good direction and then as if the pen has been taken away from the writer and the child continued the story. Very juvenile writing and ideas. Heroine is totally immature and kind of not smart at all. It is a shame that she was represented that way. She did have a chance to become more I just think that writer didn’t have a capacity to develop her. Hero in the book is better represented, but still not great. So I recommend this as a clean very juvenile teenage book for kids.

This book was soooo cute and romantic and fun! I started it last night and stayed up way to late. Then I totally neglected my work all day because I just had to finish it. The narrators did an excellent job! I loved Ashlyn and Luke together and can’t wait to listen to Don’t Forget Me next!

well written and easy to sink into. A familiar storyline with smart little twists. Can't wait for the next book!

I appreciate how the author wrote a clean romance. great story, love that there are other ridgewater high books.