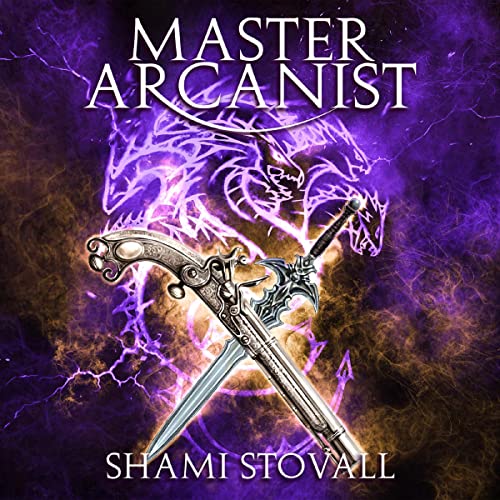 By: Shami Stovall
Narrated by: Brian Wiggins
Try for £0.00

Corruption. Power. The clash of god-arcanists rocks the world.

Volke Savan is tasked with finding the remaining god-creatures and helping them bond with people who will help fight the Second Ascension. Unfortunately, enemies and power-hungry arcanists are out to find the creatures themselves. With the help of the Frith Guild, and those who have sworn to him, Volke intends to face off against the Second Ascension with overwhelming force.

But as more individuals bond with the god-creatures, the worse the magical corruption, the arcane plague, spreads throughout the world. Volke must determine his paths in magic—creation or destruction—and then solve the problem of the plague once and for all, before it destroys everything he cares for.

Continue the Frith Chronicles with the seventh book, Master Arcanist!

What listeners say about Master Arcanist

great installment, great story, brain does amazing! I don't know what I'm going to do without this series

I have so many words I don't know where to begin, wow this book had so many levels of emotions in it.
These books just keep getting better and better, and this by far is my favorite, and I'll be talking about it for months until I get my hands on the next book.

Fun, as always. I'm really enjoying this series, sorry it's coming to a close. Author's other books are great as well.

Really getting into the meat of the story

Continues to get better, really solid well rounded YA that is enjoyable for anyone.

crying and cheering the whole book

This one was definitely a better addition to the series.. There wasn't too much constipation in main characters thoughts, the monologing wasn't exhausting, and the magical clustering of characters wasn't lost.. I cannot wait to see where the characters go from here.

Fell into too many lazy formula traps

I enjoyed the first half of this book even though it didn't feel like it was progressing forward in the overall story arc. That quickly changed with the last part of the book, especially all the final stuff. Here is the deal. Stovall has the evil and good World Arcanists meet in a parlay.

I never for one second felt like this was anything more than a device to say, oh look, we tried to talk but dag nabbit, we failed and just couldn't come to an accord. The arguments from both sides were nothing more than surface tripe. There was no REAL DISCUSSION and provocative thoughts as to why the bad guys have a reasonable point. Even Volke doesn't put forth any good reasons why gal who is obviously not as bad as the rest of the Second Ascension should listen to him. And then, big surprise, this leads to a massive epic battle between them all. This parlay in the end, was nothing more than a very poorly executed stepping stone to get to this battle that the author had no intent on avoiding. And in such, she doesn't give you any good reasons to even think that the one gal might get swayed away. It was very infuriating.

To top it off, the book is ended with the feeling of "To be continued" rather than a definitive end to the book. It was very abrupt and very dissatifying.

Another amazing addition to the Frith Chronicles!

Shami Stovall has done it again! I love the continued character development of each main character and the great voice acting of Brian Wiggins.

good narrator, good series. A little bit repetitive throughout the series, but overall a great book! can't wait for the next one.