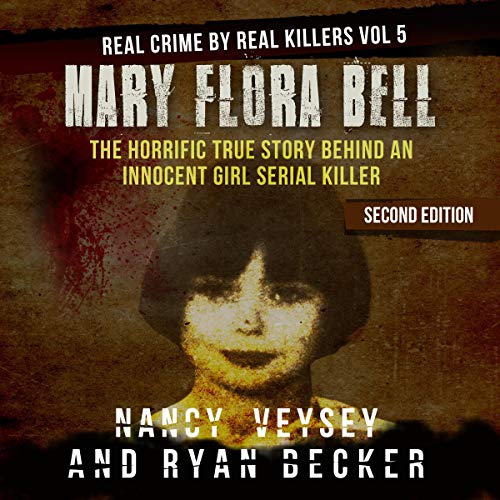 By: Nancy Veysey,Ryan Becker
Narrated by: Chris Clyne
Try for £0.00

What can drive a young and seemingly innocent child to kill?

Murder is horrible enough when perpetrated by adults, and yet the concept takes on a whole new level of chilling morbidity when a murderer is revealed to be a young boy or girl. Is it the result of severe trauma manifesting itself in the most macabre of ways? Is it the progeny of some severe mental disorder? Or were they influenced by the actions of the people they grew up with?

Most of the time, the answers to such a question are simple but no less horrific.

Eleven-year-old Mary Flora Bell was tried and found guilty, in 1968, for the coldhearted murders of two very young boys - crimes which she committed without any hint of remorse. After her past and motives have been examined, hindsight asks the pressing question: Did Mary's past as a victim herself help turn her into a killer?

In this brand new expanded edition, the author sets out to discover what really happened to turn young Mary into an infamous killer. In addition to the previous material, you will find an all-new introduction and content filled with the author’s never before published in-depth study into what made Mary angry enough to kill and her life after the crimes.

From the details of her murders to the dark childhood she suffered, Mary Flora Bell’s short, but horrific, time as a child serial killer will be analyzed in detail within Mary Flora Bell: The Horrific True Story Behind An Innocent Girl Serial Killer. Get your copy now and learn the tragic nature of a good girl gone bad and her road to redemption.

I was shocked at how terrible both the writing and narration was. Repetative mispronunciation of common words and a dull robotic voice. Writing full of conjecture, inaccuracies, presumptions, and poor attempts at psychoanalysis. Sensationalist nonsense.

It would have made a better clickbait YouTube video. I can't believe I wasted an audible credit on it!

I have been curious about Mary Bell's history after learning of her while listening to another book. The history of Mary's home life and how her mother raised and treated her throughout her life is extremely eye-opening to how she came to murder two younger boys. This book provides an awesome history, provided with the true life of an abused little girl. This book gives the information into Mary Bell's own victimization from her mother and other family members. This gives you an insight into why she was such an angry and manipulating child. This also allows you to have an internal dialog with yourself as to ascertain what you would do if ever confronted by a child such as Mary. Because while I listen to her story, I continue to wonder why no responsible adult in Mary's life did not see what I did and try to get Mary help before she became a murderer.

The narrator, however, I am NOT a fan of. There are quite a few words, which he is either unable to or just says incorrectly. This would cause me to loose focus of the story, because I would think about why he kept mispronouncing the words. So I would have to rewind to listen to the story again. This happened throughout the book, and it is annoying.

The narrator mispronounced many of the locations and names, which was annoying. He even referred to the little girl in “The Bad Seed” (novel) as “Rhonda” when the child’s name was “Rhoda”. I believe a British narrator would be more appropriate for this book.

So many mispronounced words!

The story was interesting, and the reader has promise. But good Lord, why didn’t anyone correct all his mispronounced words!? I mean, isn’t that a given if you’re a professional reader? 😳 Did no one listen to him and edit before the final performance was published? I don’t know HOW many times he said “EH-pi-tome.” 😣 Others of note were “psy-chi-A-trist,” “dis-HEH-veled,” and “exersion” (for excursion). There were more, but I can’t remember them all. Otherwise, his intonation and expressions were good. The mispronunciations just got annoying after a while.

yikes. poorly written poorly recited. I couldn't finish it. The reader is pronouncing the words wrong.