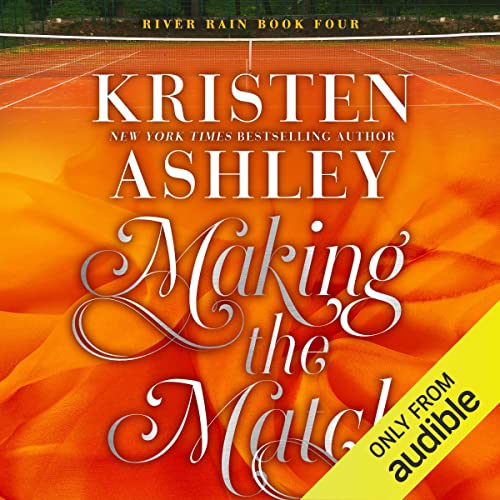 By: Kristen Ashley
Narrated by: Wesley Paul,Jennifer Mack
Try for £0.00

Decades ago, tennis superstar Tom Pierce and “it girl” Mika Stowe met at a party.

Mika fell in love. Tom was already in love with his wife. As badly as Tom wanted Mika as a friend, Mika knew it would hurt too much to be attracted to this amazing man and never be able to have him.

They parted ways for what they thought would be forever, only to reconnect just once, when unspeakable tragedy darkens Mika’s life.

A time comes when they’re both unattached.

But now Tom has made a terrible mistake. A mistake so damaging to the ones he loves, he feels he’ll never be redeemed.

Mika has never forgotten how far and how fast she fell when she met him, but Tom’s transgression is holding her distant from reaching out.

There are matchmakers in their midst, however.

And when the plot has been unleashed to make that match, Tom and Mika are thrown into an international intrigue that pits them against a Goliath of the sports industry.

Now they face a massive battle at the same time they’re navigating friendship, attraction, love, family, grief, redemption, two very different lives lived on two opposite sides of a continent and a box full of kittens.

What listeners say about Making the Match

I’m loving this series. Mika (a interest artist full of attitude and independence) and Tom (professional tennis player turn commentator and sports doctor) first met when he was happily married and totally devoted to the mother of his 3 children. They connected but never even became friends due to their attraction and that they couldn’t go there. Lots happens in both their lives and they rekindle their connection much later on when they are both available. Their story includes lots of povs and the participation of their friends and family members. There are side plots too. All in all it’s interesting, steamy, sweet, unputdownable.
The narration was perfection, Wesley Paul and Jennifer Mack were outstanding and made you feel it all.

Once again Ms Ashley delivers an introspective but inspiring story of love and family. Not just blood family but also of the heart. This made me fall in love with Tom in a way I never thought I would or could. Blame is never one sided and that came through loud and clear but in a way that was emotional and enlightening at the same time. This love story had so many complexities it took my breath away. Wonderful book. I cannot wait to read the next book now.

Fantastic story. Really made me love the characters. Hope the next one is soon
Fabulous narration

Once I got past the excessive wokeness and self flagellation, I really enjoyed the book. I realize that this series is heavy into the environment and social issues so I shouldn't have been so put off by the frequent political issues woven throughout this story. However, as a huge KA fan, I would appreciate smaller doses of it. It came across sanctimonious and these uber rich, famous, privileged (and dare I say Caucasian) characters were difficult for me to warm to. I loved the storyline and how a too often topic of infidelity was handled. This is what redeemed this book for me.

I love your writing style. Have listened to almost your complete library. I get why the river rain stories are full of causes. They don’t need to be so anti-conservative. You’re about to lose a loyal listener.

Not my usual reaction…

I usually love KA’s books but this one, not so much. I always liked Tom, despite his mistakes, so I was hoping his HEA would be with a more suitable woman. I just don’t see him with Mika.

Now I do see Mika with Henry Gagnon from The Will (Magdalen Series)! Much better choice in my opinion.

There is NO STORY

Very frustrated. There's no story here, there's no plot at all. I miss the older KA books. I'll read her dream team series and rock chick--those will always be autobuys for me, but the other series like this won't be autobuys anymore.

Lovely story and narration. My heart melted when listening to this mature love story. KA gets me in the feels with every book.

As always another great book and audio. Would highly recommend this series. Can’t wait to see who is up next.

Only wish there were more

Such a great story. I would love to read more stories with these interesting characters.

Hope there is another sequel coming soon! It is nice everyone isn’t super young. Great story!

I never thought I'd give a low review to one of my favorite authors, but here we are. KA has been one of my favorite authors since reading Rock Chick and have recommended her to many many others. Personally, I read to escape real life and like to dig into a good story. What I don't want is to be lectured to about current political issues. If that's your thing, you'll love this book.
Let's look at some of the issues we cover that I can remember:

We're told that all alt right opinions = fake news.
The hero wondering about his toxic masculinity
Side character worrying about fossil fuels as he flies on his private jet
Over population issues
LGBT is also thrown in for good measure

I want to read a good story not be lectured to. This will be the last KA book I buy unless I hear she's getting back to writing books vs lecturing about her political leanings.

Really loved this book....the series has been very enjoyable to read...look forward to the next installment!