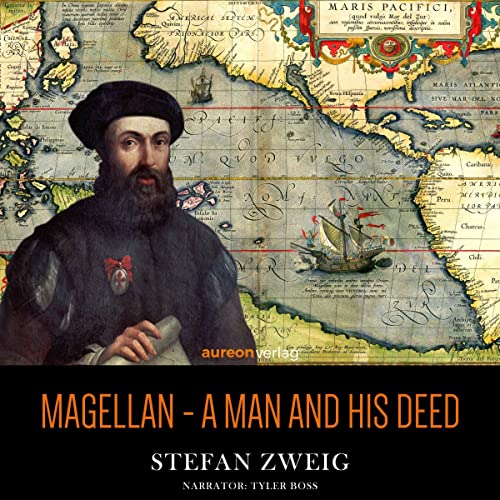 By: Stefan Zweig
Narrated by: Tyler Boss
Try for £0.00

With the age of voyages of discovery in the 15th century, the curtain of history slowly came down on the late Middle Ages. Portuguese and Spanish seafarers set out to remeasure the dimensions of the earth. Numerous spices and fruits, which we would hardly be able to do without today, found their way to Europe for the first time. Columbus discovered America in 1492 on his quest for India. Six years later, it was left to Vasco da Gama to travel through the sea route to India sought by Columbus on the eastern route around Africa. Finally, in 1519, the Portuguese Magellan, commissioned by the Spanish crown, attempted the boldest act in the history of seafaring: the first circumnavigation of the world. It was the result of his quest for a western sea route to the riches of Southeast Asia and India. In brilliant language, peppered with historical facts, the writer Stefan Zweig pays tribute to Magellan's seafaring achievements and gives the listener an insight into a time full of dramatic upheavals. While Magellan was fighting the treacherous seas of the oceans, the Reformation was already getting under way in Europe.

This audiobook is based on the translation by Robert Nusbaum (2021) of the original book Magellan – Ein Mann und seine Tat.

What listeners say about Magellan

Good story let down by narrator.

The narrator constantly mispronounced to the point it was distracting. I like his voice, but he didn't do his homework. If you are going to narrate a book about a sea voyage in the age of discovery, you should have some base knowledge of the ships and positions held around that time. It seemed he had never heard anyone say many of these words out loud and was winging it with his own versions. Can't understand why the publishers allow this.

This magnificent book deserves a better performance. It was almost impossible to listen to. Sorry.