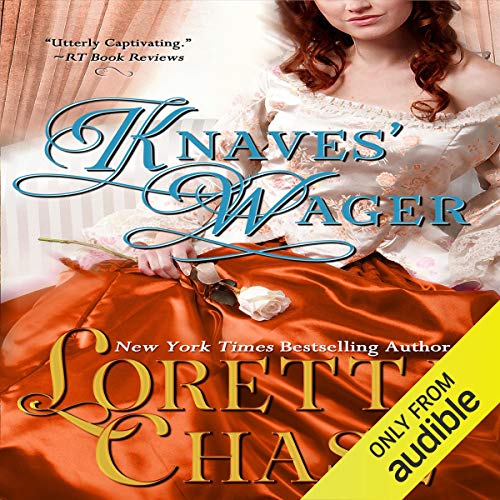 By: Loretta Chase
Narrated by: Stevie Zimmerman
Try for £0.00

Lilith Davenant has ample reason to detest Julian Wyndhurst, Marquess of Brandon: He's exactly the kind of man who hastened the demise of her profligate husband, and the debt he owed to Julian has forced her to an engagement with a wealthy suitor for the sake of supporting her beloved nieces and nephews. Besides that, Lord Julian somehow manages to ignite disturbing...feelings...she's never felt before!

Lord Julian used his considerable skills and cunning in the war against Napoleon. Now he's obliged to use the same talents to save his young cousin from a disastrous marriage to a scheming mistress - who makes him a wager: If Julian can seduce the famously icy Lady Lilith Davenant, the lady will release his cousin from the engagement.

But very quickly, Julian discovers Lilith's hidden warmth, kindness, and humor. Will he be able to prove his heart to her before she learns of his recklessly shameless wager?

What listeners say about Knaves' Wager

Oh, what a delightful book! Writing in 1990, the young Loretta Chase was not yet at the top of her game, but there are flashes of the brilliance to come. And as is so often the case, Chase creates a hero who is appalling and seductive at the same time and a heroine who is not the least bit cowed by him.

The narrator is very good, but I have to mention that the production quality of this book is simply not up to the standards expected of a first-class author like Loretta Chase. Unlike her more recent titles, this one, along with Isabella, is self-published and not produced by Tantor or Blackstone. I certainly hope that Ms. Chase or her agent sees the reviews and takes action on future audio books.

Loretta Chase is HR royalty and she deserves better. Don't let this complaint prevent you from listening, however. You'll have lots of fun!

Her style of writing is very similar to Georgette Heyer so if you don’t like GH, you won’t like this book. Just like GH, there is also no passion, minus a few kisses, in the entire story and that’s the only thing I wished to see added to this book. The rest including writing, story, character development were all excellent. I highly recommend this book.

This book was fine. Neither exceptional nor horrible.

I had a hard time getting into this. The characters were confusing to me. Maybe because I listened to the audiobook or maybe because there were too many Christmas distractions. But I did plod along - as did the book - and finished it.

These earlier books by LC have recently been produced as audiobooks and the quality of the recordings has been off. The narration is not the problem but there's a tinny sound to them that is a bit annoying.

I enjoyed this story and the narration was good; however the environment that it was recorded in was very poor. The narrator sounded "tinny" and that distracted the listener from the story...or at least it took me a while to get used to it.

A Loretta Chase novel that showcases her genius for witty dialogue and realistic character creation! The romantic path for Julian Wyndhurst, the 'knave' and the emotionally guarded Lilith Davenant is full of challenge, simmering sexual chemistry, and touching personal growth.

I think I’ve listened to this story at least once a year. I love it every time.

This comes down to a stalker and a forceful bully. So it pains me to see her eventually respond. He doesn’t even bother to get to know her. Plus it s a very slow plot. I may return it.

So bad I couldn't complete the first chapter

Wrong combo of book and narrator. Loretta Chase is one of my favorite authors so this bad audio book is a sad disappointment.

Update #2. I repurchased this book not realizing I had purchased before. Unfortunately my second review is unchanged from the first. Awful narration.

The language and heroine were formal and rigid. It was very hard to warm up to her. The language was so stayed that the narrator could not read it with any ease or comfort. The resolution was too quick and undramatic for the hours and hours the story spent making a fuss over how Lilith’s politician fiancé could not be touched by scandal. A dissatisfying listening experience.

I've read several books by the author and have really liked them. This one didn't disappoint.