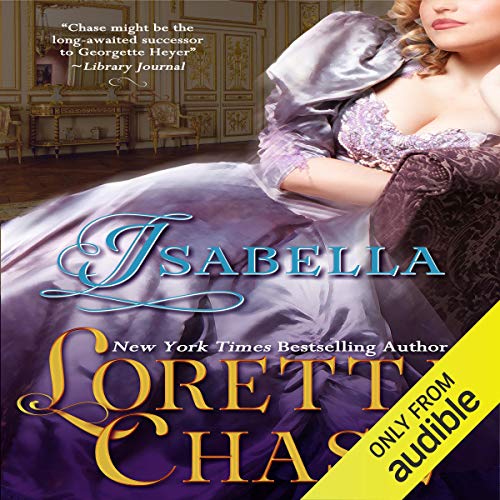 By: Loretta Chase
Narrated by: Stevie Zimmerman
Try for £0.00

At the advanced age of 26, the independent, wealthy and imminently practical Isabella Latham has no expectation of marriage. But, good-hearted and dutiful, Isabella accompanies her two young country cousins to oversee their London debut...only to find that it's she who is attracting suitors...all of whom do seem to have quite an excess of creditors!

There's the sinfully sexy Basil Trevelyan, a rake through and through, but so charming that even sensible Isabella is almost tempted. But then there's his maddeningly handsome - and maddeningly arrogant! - cousin, Edward Trevelyan, seventh Earl of Hartleigh, who has no need of Isabella's dowry; but whose adorable orphaned ward needs a mama. Could he love Isabella for herself? Isabella is too busy trying to decide whether to kiss him - or kill him!

What listeners say about Isabella

Would you try another book written by Loretta Chase or narrated by Stevie Zimmerman?

Yes sure, it was the sound quality that made the experience questionable

Would you be willing to try another one of Stevie Zimmerman’s performances?

If it would be a better sound quality she might not be so bad after all.

Do you think Isabella needs a follow-up book? Why or why not?

It was a very short book. I do not think it has room for follow-ups.

Loretta Chase is historical romance royalty, in my opinion, and her many fans have waited patiently for her books to finally appear in audio. Her magnum opus, Lord of Scoundrels, appeared earlier this year, as well as the three volumes of the Dressmakers series.

Those titles had first-class production values, but Isabella, sadly, does not. The narrator is good, but the sound quality is very poor. Blackstone Audio produced LOS and the Dressmakers, whereas Isabella and Knave's Wager (which also suffers from poor sound) are self-published. These are among Chase's earliest titles, so perhaps no publisher was interested in producing them in audio.

I've been hoping that the Carsington series would appear in audio, but I certainly hope that Ms. Chase either does not self-publish those titles or finds a better producer for them.

The story was fine as was the narrator, but the production quality of the recording was so weak that I gave up listening. It sounds as if it were recorded in a bathroom.

The story was quite fine. Toward the end I'm not sure why but I got a bit confused. Things went very quickly but they also seemed a bit disjointed. However, I enjoyed the story.

I liked the narrator, too, but the audio production was abysmal. It sounded like it was recorded in the bottom of a barrel. That's horribly unfair to the author and can't be blamed on the narrator either.

I like Loretta Chase's work and I'm sorry this production wasn't up to the standards we've come to expect in audiobooks.

Thoroughly enjoyable for its delightfully witty dialogue, it's sensitively drawn, complex characters, it's suspenseful, entertaining story and its ability to allow the reader to truly exist, if only for a few hours, in the century it inhabits. An accomplished and deft literary hand at work here.

It was funny. I had to speed up the narration. Basil was humourous and bad.

I really did enjoy this book, my only complaint is the audio quality. I enjoyed Stevie Zimmerman's performance however the audio sounded like it had been recorded in an echo chamber and blurred out maybe could do with some digital retouching

Probably ought to rerecord this then it will be a good read. Worth a try

The story spent a disproportionate amount of time on the conniving Basil and far too little time creating a compelling connection between the H/h. We know well why we dislike Basil but why H/h fall deeply in love is not shown very clearly, it's almost a fast forward skipping all the good parts.

I read the reviews about the production quality and I did notice some issues, but overall it wasn't as bad as I'd expected. I was still able to enjoy this story. For what it's worth, for those who have read other Loretta Chase books, this one is less explicit. I also thought the narrator did a very nice job. I'm going to continue the series.