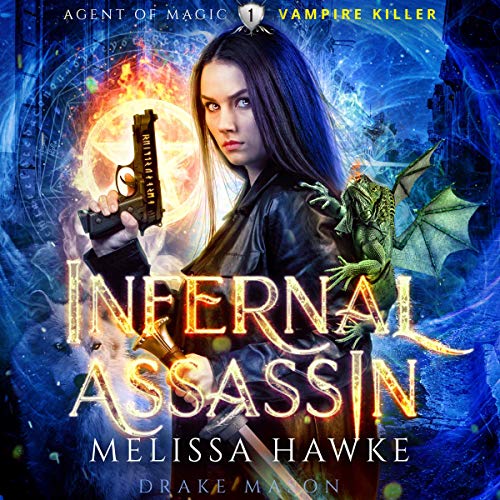 By: Melissa Hawke,Drake Mason
Narrated by: Heather Costa
Try for £0.00

A bloody ritual left my sister in a coma. I’m going to get her back.

It’s been two years, 17 days, and 12 hours since I discovered my sister’s body surrounded by witchcraft and black magic. She’s barely kept alive by machines - and if I can’t pay the bill this month, the mages at Fallen Oaks will pull the plug. So when my ex-employer shows up at my door with a possible cure, it’s tempting to slip back into my role as a killer for hire. One job, he tells me, and I could have the answers I need to save Cat for good.

The only problem is, I’ll be working for vampires - the same soulless creatures I used to hunt. According to them, my mark is about to release a modified version of the wolf plague that will decimate the supernatural races. They say I’ll be doing the world a favor. I don’t care about the politics, I’m just trying to save my sister. But when I arrive in Belize with my vampire entourage, the mark isn’t what she seems, and the man protecting her is my ex-boyfriend. The same one who testified against me when the Trust took away my magic.

Dominic freaking Finch. Wizard first class, ex-army badass, and a terrific kisser. And now, the only obstacle in the way of completing my mission. Thanks to him, I’m not allowed to use my arsenal of enchanted weapons, as decreed by the magical governing body we both used to work for. I’ve spent the last year at the bottom of a bottle, holed up with a baby dragon and a very grumpy faerie. But if I can prove who was really behind the ritual that destroyed my sister, I might just get my life back. For Cat to live, someone has to die. Luckily, I’m great at killing people.

Titles in the Agent of Magic series: