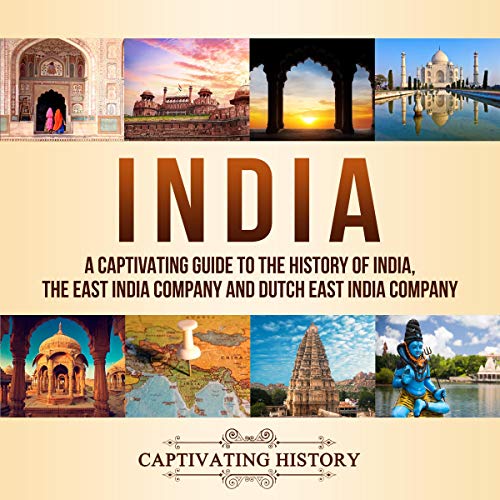 By: Captivating History
Narrated by: Randy Whitlow
Try for £0.00

If you want to discover the captivating history of India, then pay attention...

Three captivating books in one audiobook:

Some of the chapters covered in part one of this audiobook include:

Some of the chapters covered in part two of this book include:

Some of the chapters covered in part three of this book include:

So, if you want to learn more about the India, scroll up and click the "buy now" button!

What listeners say about India

There a few minor challenges to the book, in particular its introduction to the European presence in India is weak but it eventually recovers the narrative as the British presence becomes a real factor in India.

My son is quite the history buff and really enjoys reading all history. He wanted this book to truly understand India's history. He thoroughly enjoyed it!

Very well written and covers so much of India's history in a succinct manner. Would recommend reading this by anyone who is interested in the history of that country.

The book was as it was described, and I am currently using it for one of my history courses.

If you need a Roadmap to start to figure out the history of the Indian subcontinent. Go no further

Conflicting and ironical conclusions in the first few chapters... but, other than that, the book reads nicely.

Well detailed book on the history of India. Lots of detail and goes from the very beginning to modern times. Not a book to read overnight or for the casual tourist but great book for those who real students of this countries' history.

This is an excellent historian, and he thoroughly covers the story of India in this epic book. True to his style, he emphasizes ancient times and prehistory, with a rather less-detailed glance at the modern era.