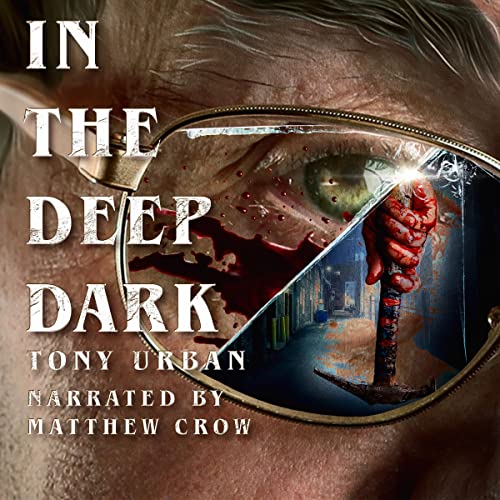 In the Deep Dark

By: Tony Urban
Narrated by: Matthew Crow
Try for £0.00

A grieving widower. A sadistic murderer. A video tape that shows too much.

On the night of his 60th birthday, Sheriff John Mucklow’s wife dies in a car accident. He thought her death was the worst thing to ever happen to him. He was wrong.

Seeking a diversion from his grief, John throws himself into investigating the recent disappearance of a local teenager. After discovering a video depicting a bizarre murder with occult undertones, John becomes obsessed with catching the killer.

As the investigation expands and horrifying answers begin to emerge, John spirals into a world more dangerous than he ever knew existed. Can he get out in time, or will he lose himself in the depths of the deep dark?

What listeners say about In the Deep Dark

This is a superb story, not for the faint of heart and not bedtime listening but excellent edge of the seat stuff. Characters are well developed and the book is well written. Matthew Crow's narration is second to none as he brings the whole thing to life. A highly recommended listen.
I was kindly given a copy of this book and leave this honest review.

Wow what a story.

Great story from start to finish. Extremely graphic and you need a strong stomach to listen to this.
Narration was brilliant as always from Matt crow. Really would recommend this book if you a gruesome story

This is one for the dark winter nights. Fast paced and very well read,I would highly recommend this book

I loved the narration of Matthew Crow; he can bring it all together. The plot, characters, the horror and the pain of are main character to life.

I would definitely recommend but not for those with weak stomachs. Certainly not while eating or any time near eating. This has it all, scary. grief, madness, extreme torture, both self-induced and not. A story plot that will have you pulled in from the very start. Excellent writing the depth of the characters and story development are well worth the investment. The character of Sheriff John Mucklow, is so real and you feel your heart go to him.

I do love listening to both this author and narrator. This was totally different but wow so engaging. I just had to keep listening. perfect.

Not for the faint hearted!
A riveting book, narrated by Matthew Crow, his brilliant descriptions brought the characters to life....and death!

I was so glad when this was finally over that I breathed a huge sigh of relief. I had to listen to this in stages, because it was just too graphic and horrific to take in at one time. Do we ever know who our partner truly is??? This went left so fast that I held on for dear life. After everything he did for his daughter, she ghosted him. That made me almost as mad at her as I am at her mom!!!! Wth??? This was a nightmare start to finish. Kudos to the author for this horrifying journey . I voluntarily listened to a free copy of this and am giving an honest review. The narrator did a great job bringing it to life.