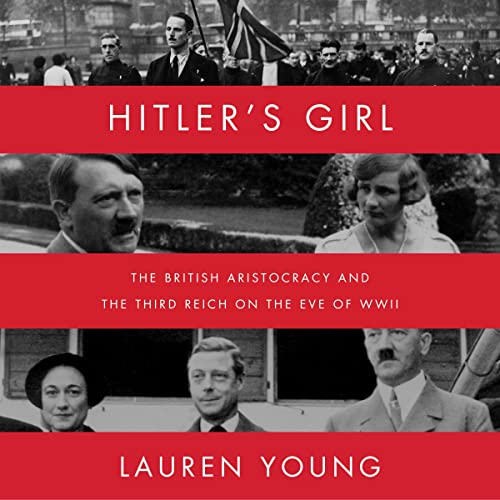 By: Lauren Young
Narrated by: Karen Cass
Try for £0.00

A timely, riveting book that presents for the first time an alternative history of 1930s Britain, revealing how prominent fascist sympathizers nearly succeeded in overturning British democracy—using the past as a road map to navigate the complexities of today's turn toward authoritarianism.

Hitler's Girl is a groundbreaking history that reveals how, in the 1930s, authoritarianism nearly took hold in Great Britain as it did in Italy and Germany. Drawing on recently declassified intelligence files, Lauren Young details the pervasiveness of Nazi sympathies among the British aristocracy, as significant factions of the upper class methodically pursued an actively pro-German agenda. She reveals how these aristocrats formed a murky Fifth Column to Nazi Germany, which depended on the complacence and complicity of the English to topple its proud and long-standing democratic tradition—and very nearly succeeded.

As she highlights the parallels to our similarly treacherous time, Young exposes the involvement of secret organizations like the Right Club, which counted the Duke of Wellington among its influential members; the Cliveden Set, which ran a shadow foreign policy in support of Hitler; and the shocking four-year affair between socialite Unity Mitford and Adolf Hitler.

Eye-opening and instructive, Hitler's Girl re-evaluates 1930s England to help us understand our own vulnerabilities and poses urgent questions we must face to protect our freedom. At what point does complacency become complicity, posing real risk to the democratic norms that we take for granted? Will democracy again succeed—and will it require a similarly cataclysmic event like World War II to ensure its survival? Will we, in our own defining moment, stand up for democratic values—or will we succumb to political extremism?

What listeners say about Hitler's Girl

This book is prompted as 'alternative history, re imagining Britain in the 1930s,' by Audible, it is not it is an account of the aristocratic right in the 1930s focusing on the central figure of Unity Mitford, the Hitler worshiping deb. it is riddled with minor and not so minor errors and repetitive. Thus an an MP is described as being a member of the Scottish Parliament, people are escaping the upcoming invasion of Norway. the Low Countries, Belgium and France, in January 1940! The author seems to think this largely untrodden territory, but excellent accounts of Maxwell Knight, The Link, the Right Club and the role of the Russian Tea Rooms already exist. indeed more accurate and better researched.
Given these considerable caveats and taken with caution, it does provide some entertaining incidents and insights. I learnt slightly more about Unity Mitford, a silly privileged and unpleasant girl.

I am only 1/3 of the way through this book but felt compelled to write, not because of the history, which is so far so good; but because of the geography, which is appalling. I have just listened to 'British policy' and then to 'England threatened,' as if Britain and England were the same thing - this is a common mistake in this book. England ceased to exist as a player on the world stage in 1707. It is like saying California declared war on Japan in 1941.
And another thing, we, in Scotland, had as many vile, despicable Nazi-supporting quislings, per head of population, as England - okay maybe not quite as many but... other than that, so far, this is a good listen. It is a story that needs told - and it is told well.