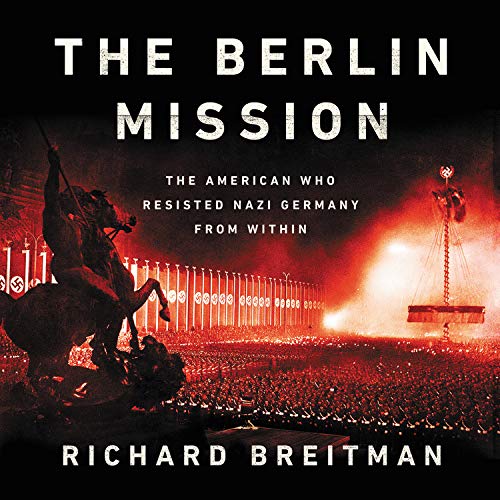 By: Richard Breitman
Narrated by: Neil Hellegers
Try for £0.00

An unknown story of an unlikely hero - the US consul who best analyzed the threat posed by Nazi Germany and predicted the horrors to come.

In 1929, Raymond Geist went to Berlin as a consul, and he handled visas for emigrants to the US. Geist expedited the exit of Albert Einstein just before Hitler came to power. Once the Nazis began to oppress Jews and others, Geist's role became vitally important. It was Geist who extricated Sigmund Freud from Vienna and Geist who understood the scale and urgency of the humanitarian crisis.

Even while hiding his homosexual relationship with a German, Geist fearlessly challenged the Nazi police state whenever it abused Americans in Germany or threatened US interests. He made greater use of a restrictive US immigration quota and secured visas for hundreds of unaccompanied children. All the while, he maintained a working relationship with high Nazi officials such as Himmler, Heydrich, and Göring.

While US ambassadors and consuls general cycled in and out, the indispensable Geist remained in Berlin for a decade. An invaluable analyst and problem solver, he was the first American official to warn that what lay ahead for Germany's Jews was what later would become known as the Holocaust.

"In Berlin Mission, Richard Breitman tells us the riveting story of Raymond Geist, an American diplomat stationed in Nazi Germany throughout the pre-war years. Based on entirely new documentation, the book presents the difficult path of an official in charge of visas to the United States, who witnessed and understood the growing plight of German Jews and helped many to reach the American safe haven, notwithstanding a restrictive immigration policy. Geist's efforts became the more crucial as, in early as in December 1938, he deduced from his contacts at the highest ranks of the Gestapo that the Jews remaining under Hitler's domination would ultimately perish. He conveyed his assessment to Washington. In our times of moral uncertainty, this book is a must." (Saul Friedländer, professor emeritus in history, UCLA)

"A vivid chronicle of 1930s Germany conveyed through the life of a lesser-known historical figure." (Kirkus Reviews)

What listeners say about The Berlin Mission