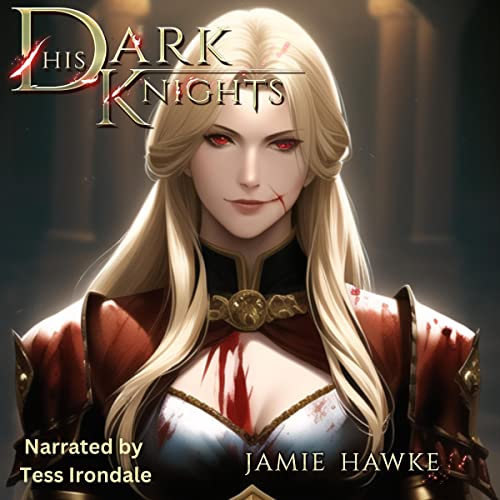 By: Jamie Hawke
Narrated by: Tess Irondale
Try for £0.00

An epic fantasy where King Arthur is a vampire controlled by the curse of Merlin. A journey of love and betrayal, of dark magic, and spicy fun.

Camelot was a land of beauty and splendor. A kingdom stable in its rule with its great king and noble knights of the round table.

Except for the fact that Arthur and his knights were vampires. When he decided he wouldn't be used as a puppet for the evil Merlin any longer, Arthur set off to break free from his curse and form an army to take down the sorcerer.

Along the way, he went up against blood mages, werewolves, and a secret order of dark magic. He formed his coven and rose to a new level of greatness.

This is his tale.

His Dark Knights is the perfect story for fans of the legend of Arthur and such vampire tales as Dracula and Castlevania.

What listeners say about His Dark Knights

amazing twist in a legend! my only hate for it is the same hate I have for all king arthur stories. Lancelot betrayal

this book had a very good twist on a classic story. tess Irondale is 🔥 as usual i love herr narration. definitely a series worth investing in

I like th ebook for its story if nothing else. We all have heard the old arthurian legends but i never heared it mixed with some paranormal elements. What if arthur was just a puppet? what if merlin was evil? This are the questions you will have answers for in this book. All rounded with the amazing Tess Irondale for a great listen.

It’s not bad, but Arthur can be pretty lame sometimes, and what he did to the hunter was pretty trash IMO

Overall it was an interesting reimagined version of the King Arthur take, and the switching of the heroes/antagonists was quite refreshing.
The story was quite decent, and filled with action, although i would have liked to see more world building.
The best part of the story were the Ladies that accompanied Arthur. They were very well written, and their personalities are quite different from each other. I would like to see more different types of creatures in the future, since we already have 2 vampire ladies (potentially 3). Nires on the other hand is quite unique, and the way she was described makes it even more appealing.
The steamy action was also well done, it felt natural, and not overly excessive.
And at last the narration was also very good, Tess does very good female voices, and the males also felt district.
Don't know what more to say without getting into spoilers; it's a good read, and I never regretted getting it.