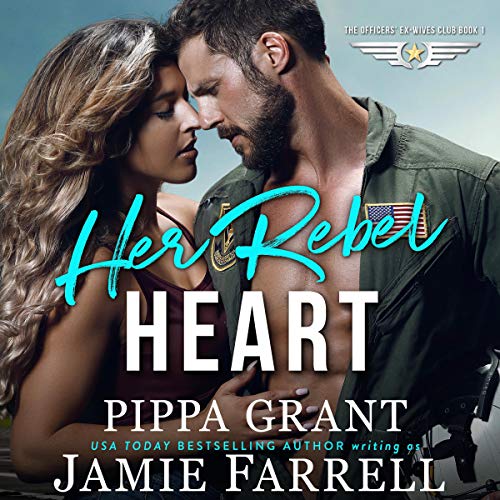 By: Jamie Farrell
Narrated by: Karen White
Try for £0.00

This sexy military pilot is about to meet his match in an unpredictable physics professor!

Kaci Boudreaux is every Southern mama's nightmare, including her own. This former Miss Grits would rather tromp around in boots shooting off potato guns - and her mouth - than dress pretty and play nice with the boys. Especially her chauvinistic fellow professors, her ex-husband, and those military cargo pilots she accidentally started a war with.

Lance Wheeler is every Southern belle's dream, except his ex-fiancée's. After being left at the altar, he'd love to take his C-130 and fly far, far away. But since his bird technically belongs to Uncle Sam (as does he), a distraction in the form of a feisty fireball of a physics professor will do while he's waiting for his next deployment with the Air Force.

He's into her for the fun. She's into him for the challenge. But when their secrets and fears start slipping out, their hearts - and even her job - will be on the line. She needs roots. He wants to see the world. What will they do about needing each other?

What listeners say about Her Rebel Heart

Fun book, some twists, lots of humour, very quirky, and it made me cry too.

I enjoyed listening to this romance novel. A little conflict between the two lovers but ended up happy.

What made the experience of listening to Her Rebel Heart the most enjoyable?

Karen White does an amazing job with all the voices and capturing the emotion of each character.

What other book might you compare Her Rebel Heart to and why?

I adore Jamie's humor in her books. Her Rebel Heart is in line with all of Jamie Farrell's other books, but her voice is also very similar to Jill Shalvis.

The potato gun scene when Kaci took Lance to send his ex-fiance's rings sailing off into the forest.

Yes, but sadly I had to take several days to finish is.

Jamie Farrell became and auto-buy author for me when I read Southern Fried Blues soon after it came out. I'm always guaranteed lots of romance and laughter with each and every book from Ms. Farrell.

While I'm not sure I'll ever fall in love with another character as hard as I have for Kimmie in Ms. Farrell's Misfit Brides series, Kaci Boudreaux really does come in a close second. Kaci is super feisty and so freaking smart, yet also loves to shoot a potato gun and was even in beauty pageants growing up thanks to her mama.

Lance Wheeler had no idea he has met his match when he meets Kaci. I absolutely loved that Lance totally got Kaci and accepted her just as she was, unlike pretty much anyone had in the past. I seriously loved them as a couple and loved how Lance worked with Kaci to help her get over her fears of flying in so many creative ways.

Lance and Kaci had amazing chemistry and could totally burn up the sheets, but I really think the fact they made each other laugh and seemed to understand each other made me fall in love with them as a couple. Yes they both made some mistakes, but I loved they found a way to make their relationship work long-term.

Her Rebel Heart is the first book in the Officers' Ex-Wives Club from Ms. Farrell, though it wasn't released first. I had no issues with reading the books out of order, but if you are one to only read books in order, you have 2 more stories already out in the series that I absolutely loved every bit as much as Her Rebel Heart.

Another wonderfully entertaining romp from Jamie Farrell! A romantic comedy filled with fun and likable characters. It is a laugh-out-loud ride! Kaci is a spunky, delightful match for Lance, and the situations they end up in are nothing less than hilarious. Lance is as swoon worthy as any hero can get and he certainly finds his match in feisty Kaci. Karen White does a great job of bringing all the characters to life with her marvelous narration.

It's a lighthearted, and absolutely amazing read

Adorable story, I loved it! It's a warm, lighthearted romantic comedy, in short my favorite kind of book.  And Jamie Farrell's always do justice to her books and her characters. This book is no exception. I think that it is well-written with well-developed characters with sassy heroine and alpha hero.
Kaci and Lance are perfect for each other. Kaci is still trying to deal with her obnoxious ex-husband, who happens to be her colleague. Whereas, Lance is trying to not think about the woman he almost married, she left him on their wedding day. That was the day of their fated meeting. Unfortunately their first counter didn't end too well...
But soon they meet again. Kaci is a physics professor. Lance is a military pilot. On surface they have nothing in common, but as they get to know each other, they realize that they're perfect for each other. They're both attracted to each other. They get on each others nerves and yet can't seem to stay away....
I think it's a great read. I listened to audio book and narration is perfect. I couldn't find a single flaw. I think that anyone who likes contemporary romance will enjoy this book.

I’ve read and listened to thousands of books over the years and this is my first review. I purchased the narrated version of this book, the storyline was OK. The narrator completely butchered a southern accent, way over enunciated the way is southerner really speaks. Kaci sounded like an elderly granny every time the narrator tried to voice her character. I am both a southerner from Georgia and a military officer’s wife, and I can appreciate stories written around the military. However I hate narration like this, it completely ruined the book for me because southerners always are portrayed as dumb and/or rednecks, and fake accents are always terrible. If the narrator read this book in her natural voice it would’ve been 100% better.

This was my first listen of both author and narrator, both of whom really delivered! I adored the strong female lead and everything she represented along with her sassy southern sayings.

After a chance meeting in a bar and an extremely hot kiss that ended too soon, the two didn't imagine they'd meet up again. The story is filled with pumpkin chucking, potato guns, and frat-like antics that keep the two main characters in each others orbit. Minimal relationships drama, no cheating, and an HEA.


I was given this free review copy audiobook at my request and have voluntarily left this review.

I'm a huge fan of comedic romance, especially if it's written by Jamie Farrell and narrated by Karen White. Kaci Boudreaux is an absolutely brilliant Physics professor and a delightfully feisty redneck female who would never, ever, own up to being terrified to fly. She doesn't even like pilots, especially the ones who cheat at punkin-chuckin' and she's determined to put them in their place, especially devilishly handsome C-130 pilot Lance Wheeler. But she's bound and determined to get on a plane to speak at a conference in Germany and she needs Lance's help to get there. Flying lessons with benefits seemed like such a good idea at the start. It's a story that made me laugh so much it hurt, but only until those happy tears turned into tears of sorrow but you'll have to listen for yourself to find out how this story ends. Karen White's southern redneck performance is both hilarious and really heartwarming and I can't wait for more audiobooks from this talented team. They are romantic comedy audiobook perfection!

Fun read. This was a cheap purchase for me so I was happy with the audio book. As a southern, a SEC fan and an older reader/ listener...I enjoyed the banter, often laughing out loud.

Would you listen to Her Rebel Heart again? Why?

this book is right up there with Jill Shavis Rumor Has It, and Julie James Love Irresistibly.
This had so much great imaginative physics humor. e.g. potato gun, pink pig with crossbow, and of course pumpkin throwing with a catapult.

great use of southern humor combined with physics!!!
note: I do use the new 1.25x speed to match the author's intent.

She made this book!!

Ms Higgs! but the humor in catapulting pumpkins stole this story .

this series is totally better than the Bliss stories. Start with this book as it will not disappoint.
Please indicate if this review was helpful. Enjoy

This is a wonderful story of Kaci and Lance. She's totally Southern and a Rebel with loving to shot off potato guns and launch pumpkins. They are so perfect together and are able to work through the problems that come up. This is hilarious and heart warming. I love the way Karen White reads the story and her Kaci accent. Jamie Farrell has the greatest way of turning ordinary situations into memorable ones. It's actually the first book in the series but you can read them out of order and still not miss out on anything. I highly recommend this book!