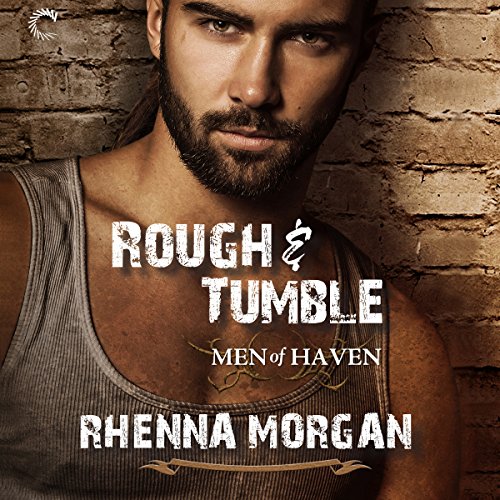 By: Rhenna Morgan
Narrated by: Gary Furlong
Try for £0.00

Live hard, f--k harder, and follow only their own rules. Those are the cornerstones the six men of the Haven Brotherhood live and bleed by, refusing to conform to society's expectations, taking what they want and always watching each other's backs.

A self-made man with his fingers in a variety of successful businesses, Jace Kennedy lives for the challenge, and he always gets what he wants. From the start he sees Vivienne Moore's hidden wild side and knows she's his perfect match, if only he can break it free. He will have her. One way or another.

Vivienne's determined to ditch the rough lifestyle she grew up in, even if that means hiding her true self behind a bland socialite veneer. Dragging her party-hound sister out of a club was not how she wanted to ring in the New Year, but Viv knows the drill. Get in, get her sister, and get back to the safe, stable life she's built for herself as fast as humanly possible. But Viv's plans are derailed when she finds herself crashing into the club's clearly badass and dangerously sexy owner.

Jace is everything Vivienne swore she never wanted, but the more time she spends with him, the more she starts to see that he loves just as fiercely as he fights. He can walk society's walk and talk society's talk, but when he wants something, he finds a way to get it. He's proud of who he is and where he came from, and he'll be damned if he lets Vivienne go before showing her the safest place of all is in the arms of a dangerous man.

What listeners say about Rough & Tumble

Excellent book, strong story, keeps you riveted...narrators sexy voice really adds to the story when speaking as the male character...

Vivienne Moore is an Events Planner but she's struggling.. struggling to find a job since going it alone - and struggling to keep Callie, her wayward sister, safe from the ever increasing dubious situations she constantly put herself in by recklessly getting drunk in dangerous places. And Callie's New Year's rescue call would lead Vivienne to a Club where she would meet a tall dark dirty fantasy man whose touch would give her goosebumps, who would see beyond her suits and bring out her wicked side, who would doggedly pursue her, wickedly worship her and who would focus on making her every wish come true. He was going to change hers and her sister's lives.. along the way there would be happiness, new opportunities, a new family, feelings of belonging she never knew possible, great sex, passion and love.. but there would be crossroads, blood, pain and tears too as she asks herself "run or stay?"

Like Vivienne, from the moment you're introduced to Jace Kennedy you know there's something special about him and, behind his charismatic good looks and panty-melting smile, there's much more to this sexy Nightclub owner.. and he doesn't disappoint. Layers get peeled away and beneath them you'll find a man who is deeply loyal, fiercely protective over those he loves, caring and sensitive.. and is all Alpha. As well as those qualities he is one part of the six part Haven Brotherhood of men who watch each other's backs, skirt the law to follow their own rules, go above and beyond for each other.. and they always always put it to the vote before letting a stranger get near Haven and the tight self-made family it represents. But Jace the caveman was going to break some of those hard and fast rules for the woman that had intrigued him from the moment they first met, for the woman that had so quickly captured his heart, for the woman he'd die to protect.. his Vivienne.

I hadn't heard of this Author before so took a gamble., and I'm so glad I did because this book delivered way more than it promised and I devoured every delicious dual POV scene. From their seismic first meeting, through the hero's many good-willed manipulations, through secrets, through run-ins with a drug lord and a shady politician, through the bloody event that stretched bonds, loyalties and tempers.. and through to the tender words, heartfelt feelings and the laying out of just what he was prepared to do to keep her. Then, reflecting on the tight group of loyal brothers with their friendly banter who'd been there through it all - and finally reaching the sweet HEA ending which was enjoyed by everyone.. but especially me. Rhenna Morgan served me my favorite dish of bad-ass alpha men, an independent heroine, some drama and angst, raw passion, sex and a yummy HEA.. and I greedily devoured the lot!! And this listen was made perfectly edible by the wonderful narration by Gary Furlong whose vocal abilities brought the many characters and the addictive chapters to life.. and I sincerely hope he continues to narrate this series.

Worth a credit? Yes.. it was an awesome start to the Haven Brotherhood.. and I've already bought book 2 and now I'm eagerly waiting for its release date.

What a pleasant surprise. I was expecting a smut biker read but the story had more depth than I was expecting. There were many more layer to the characters and the plot that I found myself engrossed in the story. There was romance, suspense, character development and entertaining brotherly interaction. This book ended up being more than meets the eye.

Vivienne Moore was a woman working hard to escape her family’s troubled past featuring two drunks, her dad and younger sister Callie. Viv was determined on exerting control of her desires so she doesn’t end up like her father, mother or sister. Instead, Viv concentrated on growing her event planning business, Amaryllis Events which couldn’t seem to get going.
Viv met Jace Kennedy, when she was rescuing her drunk sister and she decided it would be better to stay away from him as he could be the one to unleash the wild child hidden under her professional demeanor.

Jace Kennedy was the co-founder of the conglomerate, The Haven Brotherhood and he was definitely looking to get under Viv’s icy exterior. Jace projected an image of rough biker boy but inside hid a man with a heart of gold. While Jace was a sexy alpha biker, he was also a highly successful business man with a number of businesses as well as a number of charities. Jace hired Viv to plan a charity event for Haven brotherhood, it was the opportunity they both were hoping for to satisfy an itch. The author wasted no time ramping up the sexual tension before she turned up the heat with Jace and Viv.

The story was well written as there were layers to Viv and Jace. The dual point of view narration allowed the readers to be in both protagonist’s head. Each character was carefully developed so the reader was able to see the growth as both Viv and Jace wore masks that wasn’t exactly who they were. While there were hot scenes and love in this book, there were also thought-provoking themes about self-acceptance, brotherhood and giving back. I think those sub-themes showed the range in Rhenna Morgan’s storytelling. The readers were treated to a realistic relationship with great interactions with secondary characters as well as the community at large. I was excited that there are six brothers because that means that there will be at least five more books.

Rough and Tumble was a really great start to a biker-plus series. I am looking forward to the next installment.

I absolutely LOVED this book! It was sweet, sexy, funny, and hot. The narrator did a fantastic job as Jace and I never wanted it to end. Now to go download the next one!!!

I really enjoyed this audiobook which is the first in a series. The hero is one of a group of men who have banded together as brothers, built their lives and fortunes and secured their futures by sometimes questionable means. I liked the way the characters interacted and like the heroine character a lot. The storyline is original and as the first guy in the group to fall in love, this was a great story. The narration was well done also. Looking forward to the next book, which I already purchased!

I really enjoyed the story of Vivian and Jase. a GREAT love story.. a hopeless romantic, I always enjoy the chivalry of a man to protect the woman he loves. the steamy parts were so HOT! I'm looking forward to reading about all of the brothers. mixed emotions about the narrator..he does a pretty good job!

First in a new series . Beyond 5 stars . Hero is Jace . Heroine is Vivianne .
Love love this new series by the talented Rhenna . It has you on your seat wanting to turn the pages . You want to dive into the story and just Kiss Jace and kick Vivianne ass for always saving her sister .
Jace sees something in Vivianne that just pulls deeper and sings to his soul . Jace sees that Vivianne is trying to hide who she is , trying to hide from her past . Vivianne wants to start her own business, and Jace knows how to draw her to him.
Love the 2 moms in the story . Vivianne meets them in Haven house and they try to but Vivianne at ease . Only one thing mars Vivianne time . Her sister . Olivia is not as innocent as What she shows Vivianne. Grab it and see what the many layers of the story are

This book has a similar theme as most of the biker club series; without the biker club. This is a group of men that have made their own family that are absolutely loyal to each other. Their family is like a club, in that they have strict rules and they make decisions as a group, by voting. They all have their own businesses but they have helped each other be the best men that they can be.

With that being said, they do not always live by the letter of the law, but rather the essence of the law. If they observe an injustice that isn’t being righted, they will remedy the situation.

This book had humor, romance, action and heated love scenes. My only real issue was that the time line was unconvincing. There would be a statement that weeks had passed but, there wasn’t enough story to cover that time period. Other than that, it was an enjoyable listen.

I loved the book. The narrator voice was just right. there are some narrators that I don't like.

Men of Haven is great...and this is the start

I read the books first...now I am listening on audible. The narration is good and you will love Jace as well as his family. Viv brings him down...but it is a fun ride...and you will enjoy getting to know Jace and his family as it grows. There are very steamy parts - to forewarn you.