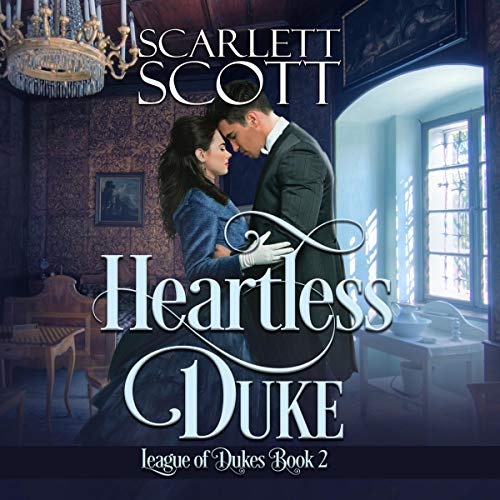 By: Scarlett Scott
Narrated by: Rosalyn Landor
Try for £0.00

He's the Duke of Carlisle, leader of a secret branch of the Home Office charged with keeping the peace amidst great peril and upheaval. By day, he hunts anarchists and murderers with savage intensity. By night, he rules over London's darkest, most depraved souls.

But he's about to meet his match in his latest prisoner.

She's a strong, independent woman who's fearless and determined. She's unlike any lady he's ever known, as unfettered and plucky as can be.

She's Bridget O'Malley, a trusted member of the underground organization to gain Irish independence. By day, she is a respectable young woman of modest means, attempting to make her way in the world through honest employment. By night, she is embroiled in a world so treacherous and dangerous that even she finds her own life at risk. To save herself, she will commit any sin.

When the heartless duke and the fiery rebel clash in a fierce battle of wills, unexpected passions flare to life. Threats lurk at every turn, and no one is as they seem. Will they be each other's ruin? Or is love enough to become their salvation?

What listeners say about Heartless Duke

I loved the first book and this one is enjoyable. You have to, however, suspend belief as the storyline is weak. I hope the next one is better.

Rosalyn Landor was formidable, but...

After keeping with it till the end, I found that the first chapter characterized the rest: a sentence of "dialogue" surrounded by paragraphs of inner thoughts. Too hard to keep up with what was being discussed. Secondarily, all those inner thoughts of the heroine became tiresome and unreasonable half way through. While others in the series were satisfying, this was hard to keep with till the end.

I was looking forward to this book after the last one, because I love a good enemies to lovers romance, but this just never lived up to that. The appeal of that kind of story is two people finding common ground despite their opposite sides and that was totally missing here? The story never gave any reason why each of them was willing to betray their long held convictions for each other besides that they found the other instantly attractive. I kept waiting for some moment of connection beyond sexual attraction, but it never came. They could've admired each other for their devotion to their cause, their intelligence or persistence and just... nothing. The sex scenes were great, but in a full novel like this I kept wanting more to their relationship and it didn't come. And SPOILERS (using pregnancy to get them back together at the end felt like a total copout). Reluctantly disappointed. The writing is good though, and I enjoyed the previous book. The narrator is as always excellent, even with the different accents, so that was a definite highlight.

I am enjoying this series so far. The characters are interesting and their background makes them who they are. This book is also steamy. Rosalyn Landor does a nice job for the men's voice.

May be my favorite in this series. I love how it brings in the book.about her half sister which is dead some time back. Her half.sister Daisy.

SO AMAZING UNTIL THE END!!! YOU GET HOOK AND THEN BAM! IT JUST KEEP GIVING AND GIVING... I TOTALLY LOVE THI BOOK AND PERFORMANCE/

So, I was initially VERY skeptical of this love story. The start to Bridget and Leo's relationship was unbelievable...even by romance novel standards. I doubted the author's ability to bring them together in a persuasive manner. But, for the most part, I would say she managed to pull it off. Of course, there are lots of holes in the story, and the author relies far too heavily on sex scenes. But, as always, Rosalyn Landor, helped bring the story to life and made it really enjoyable.