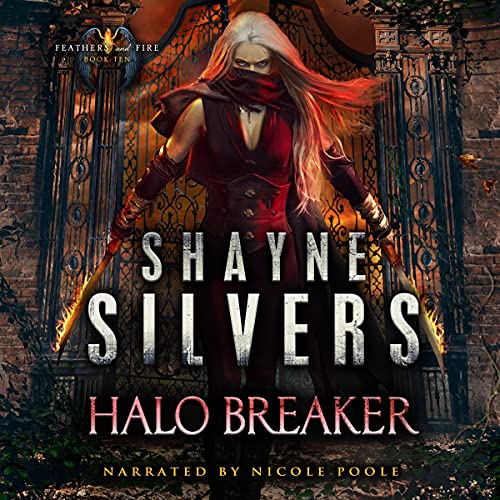 By: Shayne Silvers
Narrated by: Nicole Poole
Try for £0.00

The White Rose marches for war. The angels will weep, the devils will cry, and mankind may die.

Callie Penrose wields the Spear of Destiny and wears Envy’s Halo - the corrupting power of darkness balanced by the legendary blade of light. Both fight for dominance of the White Rose, but which force will win? Her best friend, Claire, has been abducted or killed, and her only surviving family has been ritualistically murdered to hide the truth of the Divines and the Sev’n Most Sinist’r.

Heaven has deemed her a criminal, and hell begs her to be their queen or die.

The Vatican is preparing to march on the City of Fountains to defend mankind against the horrors of the White Rose, the new Master Dracula, once and for all.

The answers to her past - and mankind’s future - are hidden deep within Solomon’s Temple, locked away for very good reason. Callie will have to face some dark, painful truths to bring harmony to a world gone mad. To discover why heaven and hell are so eager to bring her under their control.

But the Horsewoman of Despair is not alone. The Horseman of Justice and Absolution ride to Kansas City to lay waste to her foes. Three of the Dread Four will march against the forces of heaven, hell, and the Vatican.

And Kansas City is not the only battleground. The Garden of Eden is in grave peril, and no one knows if Callie is the danger or if she’s the savior.

After all, how good can Master Dracula be? The Halo Breaker rides a path as thin as the edge of a sword, and even she doesn’t know what is right or wrong.

But that’s what family is about. Getting into - and out of - trouble.

Let’s just hope the city can survive. Let us pray that the Garden of Eden will thrive.

The flip of a coin will decide the fate of the world.

If you like Jim Butcher, Kevin Hearne, Steve McHugh, Michael Anderle, Ilona Andrews, Patricia Briggs, Shannon Mayer, or K.F. Breene, you won't be able to put down the worldwide best-selling Feathers and Fire series, or anything else in the Temple Verse.

What listeners say about Halo Breaker

Shane. my only complaint is your awesome books aren't long enough. I just get into your universe and it stops. Still, a great book yet again. Thank you.

callie is on the war path....they are coming for h

whilst enjoy audible the what some of the places, names etc are rather off putting..
the continuing sorry of Callie is well written and exciting.... plenty of surprises and laughs mixed with a lot of reflection... Callie finally gets some answers...

Brace yourself for an absolute emotional rollercoaster! Get the tissues ready and a strong drink… Be prepared for joy, sorrow, copious amounts of despair, too many WTF moments to count and loads of references to other books and films that will have you chuckling throughout. Loving the new character 😃 great addition to the story!!!

the journey of Callie continues, going further down the rabbit hole and into a garden. great new character added (which means she'll be getting killed off soon). another emotional rollercoaster. great job!!

I liked this book a bit more because the author answered a lot of questions, making the storyline more understandable. I loved the Easter Bunny!
Great narration.

Shayne almost lost me with this one...

But then he went and redeemed himself absolutely on the turn! Also, the Easter bunny is one Badass Bunny!!!

Mr.. Silvers never disappoints I laugh,I Cry,I curse his name ,but I love his books!

What an addition to the White Rose's adventure!! Bravo Master Silvers, bravo 👏 And no worries Author Monkey, I don't hate you. I am thoroughly enjoying your literary art.

Starts a little iffy but gets rolling

Love these series all 3 of them. I’m patiently waiting and starting to wonder if this omega war is ever going to come and the 3 worlds will combine to one incredible world. Let’s get this party started

Shayne Silvers, you're my hero!

The Templeverse never ceases to amaze! Shayne Silvers is no trashy fiction writer! Thank you for never failing to keep me wanting more!