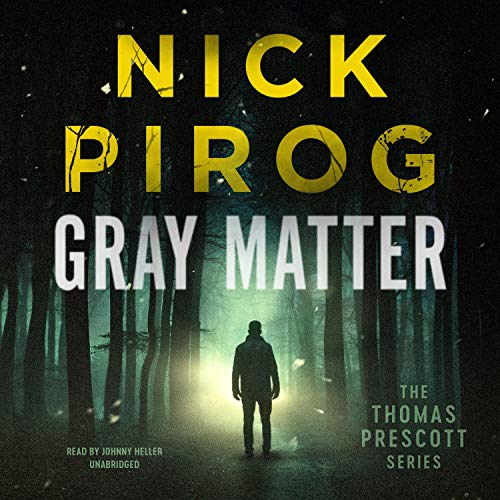 By: Nick Pirog
Narrated by: Johnny Heller
Try for £0.00

Thomas Prescott returns in a smoldering thriller of murder, treachery, and revenge. His love life in shambles, retired homicide detective Thomas Prescott returns to Seattle, the very place he fled from after his parents’ deaths nearly a decade earlier. Just as Prescott is getting settled in, he sees a body floating in the private cove behind his boyhood home. It’s a woman. But not just any woman. It’s Ellen Gray - the governor of Washington - who has been missing for the past six weeks.

The lead suspect in the governor’s murder is her husband, famed defense attorney, Adam Gray. But unlike the Seattle Police Department - where Thomas was fired from several years earlier - Prescott has his doubts about Adam’s guilt. Ignoring direct orders to stay away from the case, Prescott soon finds himself drawn into the heart of the investigation. Working side-by-side with SPD detective, Erica Frost, Prescott uncovers a sophisticated conspiracy linked to a new breed of killer. In his pursuit to catch a madman, Prescott’s investigation will take him from the state capital to the snow-covered peaks of the North Cascades and for the first time in his career, Thomas finds himself both the hunter...and the hunted.

What listeners say about Gray Matter

Full of good American humour, some lost on this English woman unfortunately. Contains two brilliant stories, one full of action, the other fond memories with a gigantic twist at the end.

Loved the book and the narrator an engrossing mystery with a side of wry humor ably brought out by Johnny Heller. Too many favourite moments to mention.

Another humour, suspense and action filled crime novel. There are plenty of twists to the plot and brilliant dialogue to keep the reader turning the pages. Just when you think the epilogue has to be next another cross road sends the mind spinning another way. Loved it.

Sarcasm and one liners galore!

I really like Nick Pirog's Thomas Prescott series. This is the second book so far with three more scheduled to be released in the coming months. I don't really think they need to be read in order but since there are only two that's what I would suggest.

This is a classic who done it murder mystery. Thomas Prescott finds the murder victim by his house in Seattle, WA. He's then warned off the case by a former coworker (he used to be an investigator with same department). Then another victim and Thomas is blamed. After proving his innocence he is hot on the trail of the real killer who isn't. And then the next and next until he gets it right.
While all this is going on another story with another protagonist is being told. Thomas has befriended a very old man and for some reason this man has let him in on his life story.
The ending is wonderful and left me thinking about this book for hours afterwards.
The sarcasm and one liners overflow. The grammar is not always correct neither is the syntax. I could be wrong but I don't believe this is due to an error by either the author or editor but that these are intentional and build on the character's personality development.
I think Johnny Heller's narration is superb.
This book has my HIGHEST RECOMMENDATION.
If you found this review helpful please indicate so.
Thank You.

One of the best books I’ve listened to in a long time! Some of it was a little implausible, but it was still thoroughly entertaining and funny!

a rollercoaster of murder and intrigue

Got this book on a whim. I was pleasantly surprised. Nick Pirog one of my new favorites.

Hilarious protagonist. Interesting tale from the old guy. Almost belivable crime(-s). Not believable wolfs - go wolfes! Well read. All threads come together at the end - which seems to often to be rear these days - so thank you, Nick Pirog, for that.

Excellent, funny, moving. Johnny Heller made the story. His performance was. outstanding. I. highly recommend a listen to this story. Very well done.

Great story. Enjoyed this author immensely. Several stories unfolding and lots of humor. Sorry it is over.

I laughed out loud, cried, and couldn’t stop listening. Can’t wait to “read” more by this author.

Loved this book. Even more, loved the reader who really makes the characters come to life! Humorous sarcasm is the best! I will definitely read the others in this series and other books by this author as well.