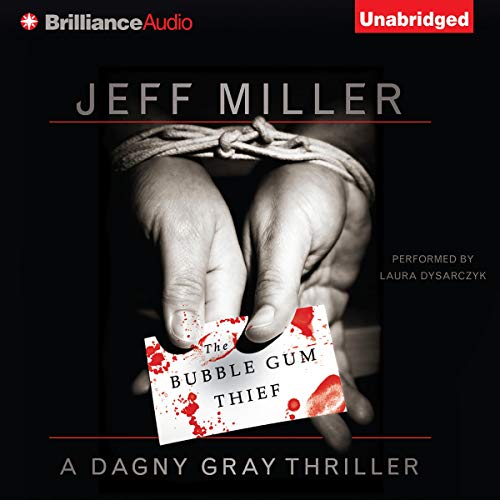 By: Jeff Miller
Narrated by: Laura Dysarczyk
Try for £0.00

It is barely a crime - just the theft of a single pack of gum. But each crime that follows is bigger, and each accompanying note promises the next crime will be even worse.

When FBI Special Agent Dagny Gray is asked to investigate the gum thief’s fifth crime, a bank robbery, it seems like an intriguing case. However there is nothing funny about the double murder that follows. Special Agent Gray becomes part of an unlikely trio of three investigators competing to stop the escalation of crimes, often with unconventional tactics.

Bent on justice, hobbled by the Bureau, and burdened by personal demons, Dagny Gray races to untangle the meaning behind the gum thief’s madness. Can she catch him before he reaches the cataclysmic finale of his escalating spree?

What listeners say about The Bubble Gum Thief

Loved everything about this book. Engaged with and cared for characters. Great writing and fantastic plot twists.I
Great choice of narrator, nice voice and never boring.
Highly recommended for those that enjoy this genre.

Wanted to know where the hell this wagon was rolling. Clever plot, useful characters, terrific reader. The Bubble Gum Thief stuck to my memory like a wad of...

The main character is struggling with anorexia (not a spoiler alert...it's obvious from the first chapter). There are very, very long descriptions of meals and what she isn't eating, and so forth.
The plot is complex but seems a backdrop to the character's obsession with food (or not food). I kept skipping forward but then I'd lose the latest small step in the plot.
Very long book--couldn't stay interested.

I found this book very interesting & different. The characters were uniquely charming in there own way. I loved the professor and Victor the most. Daphne’s struggle after her lovers death was very moving. The unexpected result was the icing on the cake in this book! I look forward to the book in the series! Narrator did a great job!

Where does The Bubble Gum Thief rank among all the audiobooks you’ve listened to so far?

Which character – as performed by Laura Dysarczyk – was your favorite?

Yes, I enjoyed it a lot

The ending is worth waiting for. the book can feel a little dragged out, but in the end lots of what seemed pointless descriptions and information adds up to a great story.

I really enjoyed listening to this book. it has suspense, romance, sadness, and victory which is what kept my attention.

Slow to start but once it gets going...

I wasn't engrossed in this one from the very start and nearly gave up on it. But I'm glad I stuck with it. The action picked up and it turned out to be an interesting story with likable characters that I want to follow on their next adventure.

Thrilling til the very end would highly recommend

This author is remarkable! The twist and turns of this story will keep.you on edge until then end and wanting more! Well written, audible narration A+!

Interesting story of a criminal that, with each crime committed, progressively commits more serious crimes, including double homicide. What’s next?