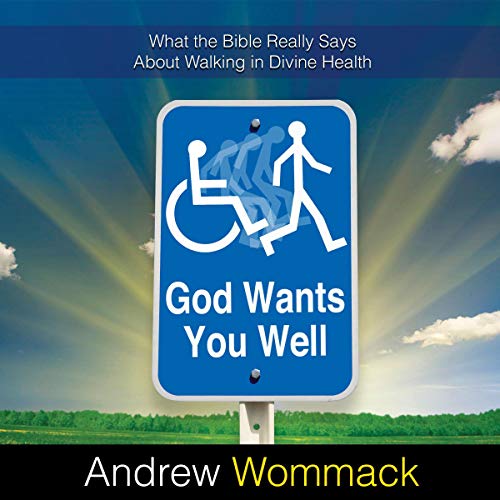 By: Andrew Wommack
Narrated by: Chris Thom
Try for £0.00

Health is something everyone wants. Billions of dollars are spent each year trying to retain or restore health. It is a basic desire of all mankind. Anyone who likes sickness must be mentally sick! Yet, religion has told us that God is the one who wants us sick. It even tries to make us believe that sickness is a blessing. That's just not true. God wants you well.

Healing is in Christ's atonement. Jesus died for our health just as much as he died for the forgiveness of our sins. This has to be the foundation of our faith for healing. Many scriptures relate the healing of our bodies and the forgiveness of our sins in the same verse. Jesus went about healing all who were oppressed of the devil and told us to do the same. Jesus hasn't changed, it's the people who represent him who have changed.

If it is God's will to heal everyone, then why isn't everyone healed? It's not because of God. And it's not just because we don't have enough faith. We do have the faith to be healed. Jesus said the problem is our unbelief - unbelief cancels out faith. Instead of trying to get more faith or bigger faith, we just need a pure faith that isn't negated by unbelief.

There are laws that govern the spiritual world just as there are laws that govern the physical realm. Electricity has been around since the beginning of the world, but mankind didn't benefit from electricity until recently, not because it didn't work, but because of our ignorance of the laws of electricity. Likewise, God's healing is here and available. It's only our ignorance of the laws which control the flow of God's power that keeps us from benefiting from it.

What listeners say about God Wants You Well

I have been challenged to a readiness to take what belongs to me. Thank you

This book opens up manys truths within the gosple, that ring true to the abundant life it makes available.

An eye opening book, changes my whole perspective on healing. God is so good to me!!!!

life changer in thinking. replace the way I thought with new thought's that changed my life

Healed! Thank you Andrew for helping me receive my healing! Because of this very direct and impacting book, I have taken my healing.

If you’re struggling with the truth that God wants you healed or the understanding of how it works, please read this book. It has changed my life!

Womack communicates in a fashion easily understood by everyone.
This book is eye opening. As surely as we have salvation we also have healing.
If you disagree or are unsure of the truth, you need to read this book.

Very well narrated. Solid teaching, thoroughly backed by Scripture and real-life testimonies. I recommend this book to anyone seeking the truth about God's healing.

Excellent so many unanswered questions answer Andrew tell you like it is and he let you know he hasn’t arrived but he has experience some victory in the area of healing a must read!

Healing for your mind and body.

This book is wonderful! Andrew Womack gets to the root of the problem of what is keeping you from spiritual healing and gives you the tools to over come those issues and backs the tools up with scripture verse by verse. Everyone should read and practice. Give your life to Jesus trust him with all your heart and he will lead you to which path to take.

Get it! You'll be glad you did.

The first step in healing....BELIEVING that God wants you well! This principle is a must for Christians to embrace.