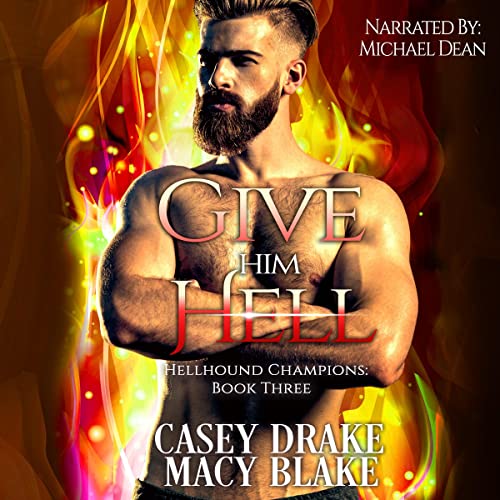 By: Macy Blake,Casey Drake
Narrated by: Michael Dean
Try for £0.00

Nick Smith is a man with a mission: Find the place where he’d been held captive as a child and discover what happened to the kids he left behind. His memories are in flux, returned to him after being blocked for the past 14 years, along with his ability to shift into his lion form. Nick is ready for answers. Instead, he finds a huge Viking of a man with flaming eyes and more power than Nick knew existed.

As a hellhound, Jedrek is often sent on missions that lead to nothing. It’s part of the gig. He’s a champion of the fire goddess, tasked with keeping the secret of the supernatural world safe. When he gets called to a house of horrors he’d not visited in years, the last thing Jedrek expects to find is an out of control alpha lion who brings to life feelings he’s never felt before.

The mysteries of Nick’s past collide with a powerful, evil force causing havoc in the supernatural world. Nick is convinced he can determine who is behind the current rash of dark magic—especially if he has the strength of a hellhound at his side. And if that hellhound is one he can’t keep his mind or hands off? Well, that suits the lion instincts roaring back to life just fine.

What listeners say about Give Him Hell

Enjoyed the entire series. Characters are fun, a great world be become engrossed in. Thank you.

I love Jedrek and Nick together and finding their purpose and HEA has been great.

Michael Dean's narration is excellent as always and these audiobooks can't be released fast enough for me!

Love the writing style in these books. absolutely love the stories. The Hell hounds well, I love them. what a great group of men/beasts. HEA for all, at least so far. Michael Dean is the perfect narrator to bring these books and all of the characters to life. he did a Great job.

Ok so I am a die hard the chosen universe fan. I have read the entire series 4 times already and am making my way through the audiobooks as they are released.

In this one we have Nick, a lion shifter who has never shifted, who was in the same house as Ben and Henry from the chosen one series and he has been searching for the kids ever since he got his memories back. One day he finally finds the house and in doing so, meets Jedrik, the Norse hellhound.

As an enforcer, Jed helped Nick do his first shift and then found out that Nick is Sawyer and Mike's brother. Small world, eh?

Of course bad magical things happen, Nick is a super alpha that forms his own pride by just claiming people, and eventually ends with Nick finding and saving the kids that have been getting tortured by Sawyer's brother.

Michael Dean did a fantastic job bringing this to life, my only nitpick was that I never had Nick sound like a fey twink. His voice should have been deeper than Jed's.

Fabulous as always, I absolutely adore all of Macy Blake’s books and Michael is a pretty great narrator as well.