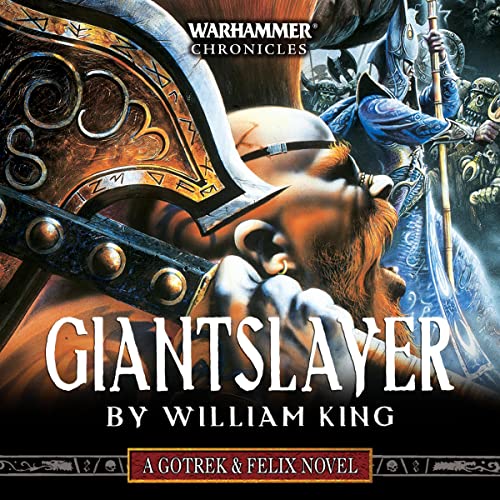 By: William King
Narrated by: Jonathan Keeble
Try for £0.00

Gotrek and Felix's adventures take an unexpected twist as they are recruited by the elven archmage Teclis to help him save the world by thwarting the machinations of Chaos on the mysterious isle of Albion.

Listen to it because....

A new player enters the series—none other than the infamous high elf mage Teclis! Of course, the bickering between him and Gotrek is a high point, but the exploration of the mysterious island of Albion and the return of some old foes doesn't hurt either.

Gotrek and Felix—unsung heroes of the Empire, or nothing more than common thieves and murderers? The truth perhaps lies somewhere in between, and depends entirely upon whom you ask....

Separated from their friends during a vicious battle, Gotrek Gurnisson and Felix Jaeger are magically transported to the storm-wracked isle of Albion. Strange and dangerous creatures stalk the island and omens tell of a great evil that is rising—an evil that might destroy the entire world. With the aid of the natives of Albion and the mighty high elf mage Teclis, Gotrek and Felix must stop the secrets of the mysterious Old Ones from falling into the hands of servants of the Dark Gods.

What listeners say about Giantslayer

Not as good as the rest

I’ve really enjoyed the previous books in the series, but this simply wasn’t up to that excellent standard. Felt shallow and rushed, with no real link to the rest of the series. Disappointing :(

the path of the old ones. brilliant story great performance cant wait for the next book in this series

Get over yourself man-ling, Kill or be killed.

Great story, Great characters and lots of carnage, Whats not to like? I loved every brutal minute of it.

Series continues to be excellent

Love it, Gotrek and Felix get into more scrapes on the damp and windswept Isle of Albion this time. The series continues to be very entertaining and introduces lots of people, places and events that are very familiar to old Warhammer fans. I always wanted to read the books but never got round to it, the audio books are so well done it's a pleasure to finally listen to them

Finally the series is back on track! Ditching most of the mostly annoying side characters did great for the story.

Gotrek and Felix are the best of oldhammer!
Black Liberys best series and another great installment

audio performance is honestly 110%. Jonathan Keeble is a master and hid characterization is just beyond most other orators.

where is this book?

can't find it on audible, is it being released at a later date? God bless

I thought vampire slayer was a little weaker than the others (can’t quite put my finger on why) but this one is amazing much thanks to loremaster of sotek for letting me know this series exists. I wish there was more warhammer fantasy on audible

Two thumbs up, Gotrek, Felix, Teclis. what more could you want? Grab it plz

Best one so far.

Great paceing, gripping story and there are more books to enjoy. My first 5-star given.

Another great chapter in the adventures of Gotrek and Felix! Jonathan Keeble remains as the best narrator I’ve heard on this app.

Gotrek is a force of excellence

Listen because:
It’s dramatized
Great voices
Inspirational
Reminds you of how great you too can be

Listened to all of them, all are great

What a delightful surprise.

One of my favorite Duo's joined by a member of my favorite duo. So thrilled to hear Teclis in this adventure. It was also refreshing n9t to have Skaven make an appearance. Keeble is great as always.

This series just keeps on improving, book after book. There are so many things to praise, but to name a few: Keeble’s performance is flawless, the liveliness of each character and the mix of action and suspense throughout the book is fantastic!

another wonderful piece from the king

it is another Gotrek and Felix novel so you should already know what to expect. it was another great listen from an outstanding narrator.

Gotrek and Felix fans should be entertained by this one too. Keep these coming please. They are a fun diversion.