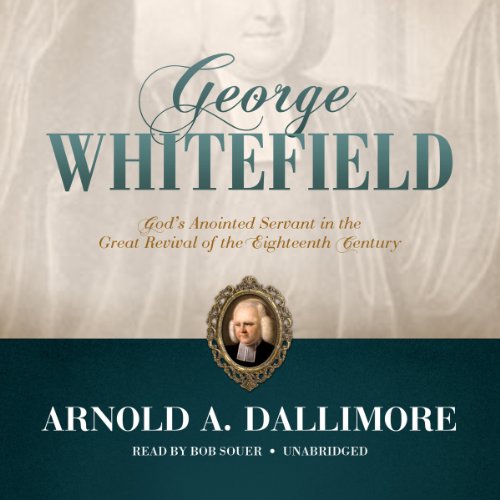 By: Arnold A. Dallimore
Narrated by: Bob Souer
Try for £0.00

This fast-paced, inspirational narrative reveals how God used one man of great courage, discipline, and humility to bring countless souls to Christ.

God’s accomplishments through George Whitefield are to this day virtually unparalleled. In an era when many ministers were timid and apologetic in their preaching, he preached the gospel with aggressive zeal and undaunted courage. In the wake of his fearless preaching, revival swept across the British Isles, and the Great Awakening transformed the American colonies.

The previous two-volume work George Whitefield: The Life and Times of the Great Evangelist of the Eighteenth-Century Revival is now condensed into this single volume filled with primary-source quotations from the 18th century, not only from Whitefield but also from such prominent figures as John and Charles Wesley, Benjamin Franklin, and William Cowper.

What listeners say about George Whitefield

A forgotten figure for many

This is a moving account of one of the greatest Christians who have ever lived. The author corrects a number of distortions about Whitefield which have been propagated by some writers about him. Whitefield's single-minded devotion to Christ is vividly portrayed but nowhere more than in the closing chapters. Soli Deo Gloria.

Encourages me to go and make Christ known to the world! What an awesome God we serve. How little we are on fire like Whitefield.

Where are the 21' century Whitefields? We need them badly.
A blessed story of God's grace. It's all of Jesus and nothing (or no one) else.

Compulsive listening. What a giant of the faith. Oh how we need another Whitfield in our day.

I love reading/listening to biographies. This was short enough to listen to in a day and long enough to get in depth, and not just scratch at the surface of Whitefield's life. I love hearing about the life of George Whitefield and this was very satisfying, as I learned a lot more about the man and his friends (and enemies), than I had from other, shorter biographies.

By the way, the narrator, Bob Souer, was the icing on the cake. His smooth, clear and articulate delivery really made the book so easy to listen to. He obviously knew the subject matter. Sometimes, the narrator can make or break a good audio book, and Bob Souer really added great listening pleasure!

For fans of Whitefield, and biographies, I highly recommend this audio book!

Dallimore is eminently readable and in this regard listenable. Proving His Word true The Lord gave Whitefield to the Church to equip the saints in manifold ways. How indebted we are to this man's example brought about by the hand of The Master he loved so well.

I loved this book. Hearing Whitfield's life made me want to change mine. Listen and be changed.

If you want to know our spiritual roots, read this, America! It will bless you.

A True Servant of God

This allows us to see a different side of Reverend George Whitfield, what a blessing. A true servant of God

I knew little of this great 18th century minister. He was an amazing man, used by God in astounding ways. Truly inspirational.

We all can learn from his life!

I knew nothing of this man and his ministry. God truly anointed this man. At times I gasped in horror, was filled with compassion and love for the lost, was inspired and convicted. It left me praising our Lord and Savior Jesus Christ and the power of His word that speaks to those He has called!

A life worth listening to!

There may be no person who spoke directly in person to more people in the history of the world as George Whitefield. If just for this single fact, a biography of his would be a must read. However, during the 40 years of his preaching ministry, the western world (and by its effects the entire globe) changed immensely during the movement known now as the Great Awakening. This period has wide ranging effects including the establishment of major denominations, the push for the abolishment of slavery, the development of media, the rise of democracy, and the establishment of the United States. The central figure of this time was George Whitefield.

This volume by Arnold Dallimore is an abridgment of his much longer comprehensive biography of Whitefield. I highly encourage you to read the unabridged version if you want a full perspective on the evangelist’s life. But, if you need a quick yet substantive overview of the man’s life, this book will fill your needs perfectly.

Whitefield was converted in his early college years, and from a short time afterwards, he began preaching evangelistic messages in England. His eloquence and power displayed in his sermons quickly had many flocking to hear him. Seeking to maximize hearers for the gospel of Christ, he turned to “field preaching” in London parks. Tens of thousands began to turn out to hear his messages. There may never have been larger crowds that have ever been able to hear a single man unamplified. The force of his message to turn to Jesus and to follow His will quickly began to have great effects in reforming London society. But only after a few weeks, Whitefield left on his first of 13 Atlantic crossings to take the good news to America.

His life is filled with many ups and downs. The love of America for him, his support of orphans, the influence he had on British nobility contrasted with his constant illness, his skewering by the press, his troubles with the Wesleys. Through it all, he kept a singlemindedness that nothing could make him stop from extending the invitation of Christ’s love for sinners. The relating of his climbing out of bed to preach from a balcony to eager listeners the night of his death shows the power Whitefield had 40 years after he spoke for the first time.

Revival literature should encourage and strengthen the seeking heart. This book does both. Whitefield’s life is a testimony of God’s keeping grace even in light of extremely difficult pressure. If men thought he was too proud, he humbled himself further; if others wanted control, he submitted to them; if though completely spent of all strength a one would ask for a word about the Living God, he would share and not rest. He talked to millions 300 years ago. A man used by God can change the world, and George Whitefield is the proof.

Audible listeners: the narrator did an excellent job. A worthwhile listen.

What a beautiful spirit did this great man of God possess! What absolute service to the Glorious Majesty on High. What Discipline, what Love and real Dedication to Christ foremost and to his fellow man thereafter! I simply have come away with a very deep sense of respect and admiration.

In these degenerate times, there simply is nothing equal to this.

Wish you had included his sermons too, perhaps the next audiobook...!