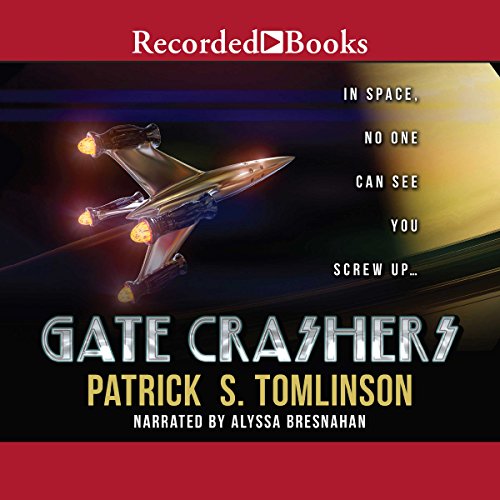 By: Patrick S. Tomlinson
Narrated by: Alyssa Bresnahan
Try for £0.00

A lighthearted science fiction novel about first contact, exploration, and desperately trying not to screw up from an up-and-coming sci-fi author.

On humanity's first extra-solar mission, the exploration vessel Magellan, or, as she prefers, "Maggie", discovers an alien artifact. Deciding that finding advanced alien life is too important to ignore, Captain Allison Ridgeway chooses to return to Earth while ordering her crew to reverse engineer technology far beyond anything back home.

Meanwhile, at mission control, the governments struggle to maintain the existence of aliens a secret while also combating bureaucracy, the military industrial complex, and everyone else who wants a piece of the science that could skyrocket humanity into a new technological golden age.

Little does everyone involved know that the bumbling of a few highly evolved apes in space hasn't gone unnoticed, and the people of Earth have put themselves on a collision course with a far wider and potentially hostile galaxy.

What listeners say about Gate Crashers

What could have been a great story was detailed by the awful attempt at comedy.

I recommend this book to fans of satire, dry humor, and John Scalzi books.

This novel is effectively three books in one, but not in a bad way. To elaborate, it’s roughly spit into a discovery, an exploration, and an intergalactic “relations” phase. This structure effectively keeps the story and plot from becoming stale or outstaying it’s welcome.

The wry humor is topical in a timeless way that pokes fun at things that always seem ripe for satire through the ages. I chuckled, I laughed, and was always entertained throughout. The characters, settings, and writing were all objectively solid.

At the end of the day, like many comedies, Gatecrashers is ultimately forgettable, but remains well worth your money.

Couldn’t stay with it

Felt like it was trying to hard. Not engaging for me personally. I cannot recommend this book.

First contact scenarios are a common enough trope in science fiction, but Patrick S. Tomlinson manages to inject a bit of freshness and fun, and more than a few dashes of silliness, into mankind’s discovery of intelligent life out amongst the stars.

Gate Crashers feels at times like an ode to Star Trek (Tomlinson’s Captain Ridgeway of the Magellan being only a hairsbreadth away from Voyager’s Janeway, while Bucephalus‘s Captain Tiberius, a dashing man of action in and out of the bedroom, draws an obvious parallel to one James Tiberius Kirk), replete with a few away missions for our band of cosmonauts that see them tangling with strange new worlds, new life, and new civilizations, boldly going where plenty of aliens have already been before.

Despite there being a certain degree of familiarity baked in, Tomlinson still manages to do his own thing and brings in shiploads of fun along the way, playing a lot of Earth’s first expedition into deep space for laughs. The discovery of an alien artifact by the Magellan’s crew kicks off a wave of scientific advancement, as well as the emergence of an artifact worshiping cult, back on Earth. This latter development is particularly preposterous given the fairly mundane nature of the alien device, and this sense of grandiose discovery for mankind, of things that are commonplace for the galaxy’s alien races, becomes a significant theme that recurs throughout the book. There’s a fun bit of interplay between expectations of discovery and the reality of their situation, but Tomlinson injects plenty of high-stakes action, political machinations, tabloid sensationalism, and world-destroying perils along the way. The threats to mankind are deadly serious, and despite some scenes overloaded with attention-killing technobabble, the story floats along with a good degree of jubilation. Not every joke landed just right for me, but I found myself laughing along with Tomlinson’s wit more often than not. One pun about being a “seasoned veteran” still tickles me, in fact, well after having finished my listen of Gate Crashers.

While the writing is bent toward the comedic, Alyssa Bresnahan’s narration is, unfortunately, largely straight-forward. While she does an admirable job bringing the various characters to life, injecting each member of the Magellan and Bucephalus with their own distinct quirks and voices, her reading is oftentimes much too serious given the tone of the material. Quite a few times, I found myself wondering how Gate Crashers would have sounded with a narrator like Wil Wheaton at the helm, who could capture the irreverence of this particular story and Tomlinson’s writing, much as he had for several of John Scalzi’s audiobooks. Bresnahan’s narration is perfectly adept during this book’s more serious moments, and I’d like to listen to her reading a work that isn’t so reliant on humor, but she too often misses the author’s comedic beats and plays too much of a straight man to Tomlinson’s silliness. On the production end of thing, Bresnahan’s reading comes through crystal clear and Gate Crashers is another finely recorded audiobook from Recorded Books.

Gate Crashers is a fun, witty, feel-good listen, one in which its author has carefully balanced freshness and familiarity while giving us some much-welcomed insight into humanity’s perseverance and ingenuity, and more than a few well-timed fist-pumping heroics as Earth’s most evolved apes outwit far more advanced alien races by the skin of their teeth. If there are more voyages in Megellan’s future, well, beam me up! Or freeze-dry, vaporize, shift, and reconstitute me. Or whatever the hell it is they do around here…

Please find this complete review and many others at my review blog.

Awful Narration Ruined Book For Me

Stilted narration ruined an otherwise maybe interesting story. The narrator's pacing was odd, too slow in many ways & delivery was monotone & boring, making it extremely hard to pay attention and follow the actual story, as well as making all of the jokes fall flat & sound lame.

Had a hard time getting through the book because of it & it was several starts & stops before I finished book over the course of months.

Even that was just a fluke, where I accidentally pressed a wrong button & happened to turn this book back on to a particularly interesting scene, so I listened for a little while as I was going to sleep. I still skipped some parts & didn't bother to go back to restart where I remembered leaving off as I normally would have, just because the narration was so painful to follow.

I don't think I would buy another book by this author unless the narrartor is changed. It was just that bad for me.

PLEASE Authors, pay more attention to who is voicing your books. The right narrartor could've really sold your book instead of this one, who absolutely ruined it.

Gate Crashers is a fun, fast-paced romp through a hilariously treacherous universe. The characters are relatable and the story is timeless. Highly recommended!

I have bought all of Patrick S. Tomlinson's audiobooks, for the general fun of his foolery and the unusual charm of his characters. As an unexpected bonus with Gate Crashers, I also discovered a new favorite narrator. I thought Alyssa Bresnahan brilliantly captured the quick rhythm and highly elusive subtleties of the writing here. She made the wildly distinctive cast of characters and their extremely witty dialogue come vividly alive for me. I see experiences here differ greatly. But I found this particular partnership of reader and writer a perfect match, and deeply enjoyable from beginning to end.

This might have been a good story, were it written by another author. I also couldn't get past the narrator - her delivery was terrible.

I don't find much current science fiction all that entertaining, but this was fun. Witty, scientifically sound (mostly), Interesting plot with occasional nail-biting. Consistent characterization potraying people you'd like to meet. I vote for Peter Jackson as director.

Quite an amusing book

I'll be be honest that it was the rocket and Art Deco font that got me to slow down my browsing enough to listen to the sample. I'd not heard of this author or this narrator, so I had no idea what to expect.
I usually dislike comparisons like "if you like author A/TV show/etc. you'll love this", but in this case the reviews that describe a similarity to some of John Scalzi's work has merit in that the humor and smooth way that it's injected into the story are reminiscent of his. It's both predictable and welcome. My favorite frequently used device was the unnecessarily-long simile, which reminded me of Douglas Adams, though are not as complex.
The plot and overall story are unique, and although it includes a fair number of tropes (tough to avoid within a genre), they're well integrated.
Subjectively speaking, the book is well, done, and the narrator is a new favorite of mine. She makes clear which character is speaking even without unique voicing.

This started off a little slow. But then it got to be a pretty good story. I liked the characters and the narrator did a good job. But when I got down to the last 30 minutes, the author threw in some blasphemy. It ruined the story for me. It was totally unnecessary and didn't add anything good to the story. Hence the low score on the story. I won't buy any more books from this author.