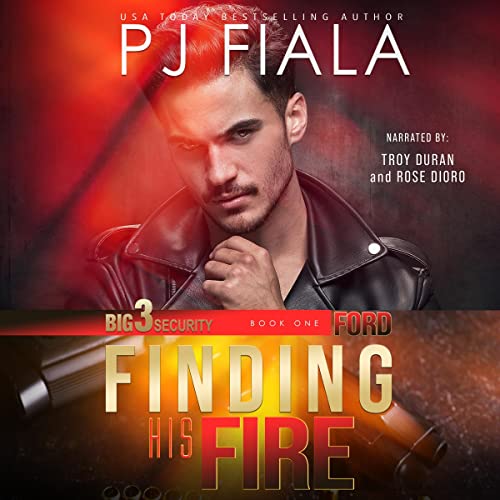 By: PJ Fiala
Narrated by: Rose Dioro,Troy Duran
Try for £0.00

And the fires that burn between them.

Trailing the arsonist who killed his parents, Ford Montgomery will do anything to take down the entire cartel who ruined his life. But when that trail leads to a sexy waitress who's embroiled in it all, Ford knows he can't turn back now.

Megan Marshall trusts nobody. After all, her ex-husband is a cold-blooded killer—and he's on the loose. So when a hot and rugged Army ranger walks into her life, Megan can't deny the flames that illuminate between them. But their only chance at survival is to take down the deadly cartel that threatens everything. With danger igniting and their passion burning, can the ranger and the waitress extinguish the fire that may engulf them all?

What listeners say about Ford: Finding His Fire

Loved listening to this book. I’m really enjoying getting to know this author and her style. I’ll definitely read and listen to more

I first read this book a while back and enjoyed it, however, I do enjoy immersive reading and this audio version was great !
Thank you x

Ford Montgomery arrived to see his brother and sister waiting for him at the courthouse steps. They were finally getting justice today. The man who set the fire four years ago that killed their parents was finally going to pay for his crimes. On top of their parents' murders, he was also suspected of starting fires that had devastated both Gatlinburg & Pigeon Forge.

When the sheriff approached they knew he was getting ready to deliver bad news. Bobby Ray June had escaped on the way to the courthouse helped by his cousin Waylon. The sheriff asked if Ford wanted the bounty to bring him back in.

Meghan had worked at the Log Cabin Restaurant for the last four years. Thanks to her ex-husband Waylon, she had to leave her nursing job after being set up to do a drug run for him. How she didn't see that he was a drug dealer was beyond her, but thankfully she divorced him as soon as her bail had been posted.

When she arrives to work she sees Marcus sitting in a booth. Why won't he take 'she doesn't know' as an answer when he wanted to know where to find Waylon? Evidently, he had stolen something and Marcus wanted it back.

As she is getting ready for her shift a gorgeous stranger walks in the door. He places his order only to find out he is also looking for Waylon. But, instead of theft, he wanted him to lead him to Bobby Ray for murdering his parents.

This book is narrated by Rose Dioro & Troy Duran. It is the first that I have listened to either of these narrators and I loved how they brought this story to life. Rose perfectly portrayed Meghan and Troy has this deep, soothing, I am in control voice that I loved listening to.

This book is very well written and the characters are fully developed and relatable. The story has a few unexpected twists and turns that put a wrench in their romance that is already troubled with danger and suspense.

This book is full of steamy hot sexual content and these narrators brought Ford and Meghan's story to life from the first word. Highly recommend this audio! This is the first time I have read PJ Fiala, but I highly recommend her and will be reading (listening) to more of her writing in the future!

If you love a great suspense story, try this book. the narration is pretty good too. I like that there are two voices. From male and female. It's a gripping story, that made me cry. From a Fan... Pam James.

Great Story and narrators brought the characters to life

I have read several of this authors books and loved them. This book was no different. The main characters and the supporting cast were flushed out nicely. This is the first of her books that I have listened to on audiobook and I am a HUGE SNOB when it comes to the voices. This is the best compliment I can give: as I listened to the book, I was entertained the whole time and I never questioned who was speaking. The performances were great and I can’t wait to listen to the rest of the series. A narrator can take a great book and ruin it or they can bring the characters to life. These narrators brought it to life easily and now I am going to listen to it all over again.

Bounty Hunter For Montgomery is trying to catch the man who killed his parents and broke out of jail when he meets Megan Marshall, but when sparks fly between them can he keep her safe or will his secrets destroy them? This book was absolutely fantastic and when I was offered to listen to an audiobook of it thats was a no brainer. Narrator's Rose Dioro and Troy Duran are so perfect for this book they brought the characters to life and had you hook. This audiobook has it all to drugs, drug lords, romance hot Steamy chemistry and romance and sex to secrets and suspense. I can't wait for the next book in this series.

Bounty Hunter, Ford Montgomery, is after a jail-break prisoner and his first stop is to question the ex-wife of the accomplice. Except, Megan is not what he expected. Megan just wants to get on with her life but her ex has done something and his drug-dealing boss is after him…and thinks that she knows where he is. When Megan’s house explodes, she’s saved by Ford…who had been staking out her house. Ford believes that Megan is innocent and decides to keep her safe while he continues to search for the ex. Close proximity leads to more…maybe even love…but will Megan live long enough for this duo to explore more? Ford also has some baggage to deal with if he wants to move on. Good story and start to this series.

Great beginning to this series!

This is a great romantic suspense story, with just the right blend of sexiness and angst. I loved getting to know the characters and their backstories, and found their interactions touching, believable, exciting, sweet, and tense at times, just a perfect balance. I’m a sucker for romance and for family and friends who are family, always having your back.

Troy Duran was at his best, as always, and Rose Dioro, a new narrator for me, did a great job as well! Looking forward to the next book in the series!

This story was sizzling. I really enjoyed the chemistry between the characters. It was Intriguing, sexy, exciting and full of drama.
The narration was absolutely fantastic. Both narrators performed these characters brilliantly.
This is book 1 with an HEA and can be read as a standalone.
I recommend this book.

Enjoyable and suspenseful read. Narration was great. Some twists and turns with an HEA. Enjoy!