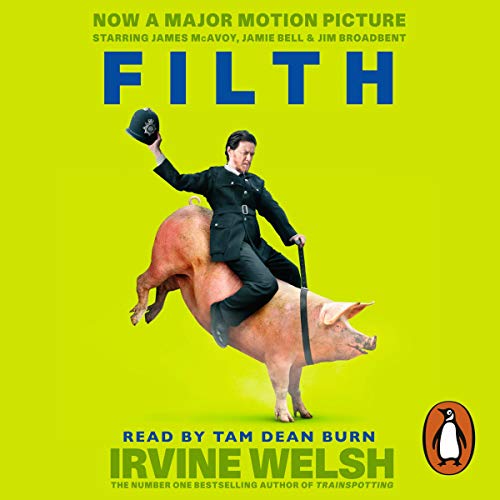 With the festive season almost upon him, Detective Sergeant Bruce Robertson is winding down at work and gearing up socially - kicking off Christmas with a week of sex and drugs in Amsterdam. There are irritating flies in the ointment, though, including a missing wife, a nagging cocaine habit, a dramatic deterioration in his genital health, a string of increasingly demanding extra-marital affairs. The last thing he needs is a messy murder to solve. Still it will mean plenty of overtime, a chance to stitch up some colleagues and finally clinch the promotion he craves. But as Bruce spirals through the lower reaches of degradation and evil, he encounters opposition - in the form of truth and ethical conscience - from the most unexpected quarter of all: his anus.

In Bruce Robertson, Welsh has created one of the most corrupt, misanthropic characters in contemporary fiction , and has written a dark, disturbing and very funny novel about sleaze, power, and the abuse of everything. At last, a novel that lives up to its name.

What listeners say about Filth

the longer version was a lot better. this book is designed to be gross and offensive. By cutting it down you tear away at the character and story witch was incredible. This is my favourite book, please restore it to the longer version. without the added length it loses its story and jumps about. please read the actual book this doesn't do justice to the book.

Love the book, narrator is good but way too short. Wish there was an unabridged version

All the best bits missing!!

ok I admit I didn't realise it was the abridged version..
Literally my favourite book of all time cut to ribbons.
Little details (which make the story!) like his frozen gala pie.. details of his time in the Australian police, and most criminal of all the ENTIRE trip to Amsterdam!!
still an utterly amazing story but next time I'll read the fine details of the audible description and get the full copy.. or maybe stop being lazy and read the book myself (again) 😜

Tan Dean Burn is amazing.
I was just so disappointed to realise it was an abridged version as it very quickly got to the end and he hadn’t even been on his trip to Amsterdam!

Bought this and just seen that it’s only 3 hours long, which will miss most of the book out.
Just like Glue, which made no sense compared to the fantastic book.

I’ll be requesting a refund for this.

If you’re not keen on Irvine Welsh you’ll probably not like this book, but if you are then I think you will.

Clever storyline, although the graphic language is OTT as you would expect.

The narration was excellent.

could not stop listening to this, brilliant proformance. even laughed out loud a few times.

Where does Filth rank among all the audiobooks you’ve listened to so far?

It was a really great listen. Exciting, quite gross and very gritty.

The characters are on the whole all really well developed and you dislike them all equally!

What about Tam Dean Burn’s performance did you like?

The voice of Tam was ideal for the part. The different voices were well defined and he was a little scarey at parts which fueled the excitement. Very passionate.

The bridged version couldbe ideal for one sitting as the reader keeps your interested with the varied voices.

The funny bits. When Bruce the main character was thinking in his head.N

What other book might you compare Filth to, and why?

Cant think of any other book that was like Filth.

Which character – as performed by Tam Dean Burn – was your favourite?


Did you have an emotional reaction to this book? Did it make you laugh or cry?

I thought when the worm was talking, my audio book was faulty and I had two books mixed in together , got half way through the book and realized it was the worm talking, very strange. Did not spoil it for me.

If you could sum up Filth in three words, what would they be?

What was one of the most memorable moments of Filth?

The strange interludes where a tapeworm inside the main character is temporarily given a voice.

Those handful of moments give the book an errie and disturbing, but memorable tone; especially in audiobook form.

What about Tam Dean Burn’s performance did you like?

His reading of Filth captured the tone of the book perfectly.

There already is a film adaptation of Filth in the works.

So, I can't think of anything other than the film's real tagline "It's a filthy job getting to the top, but somebody's got to do it"