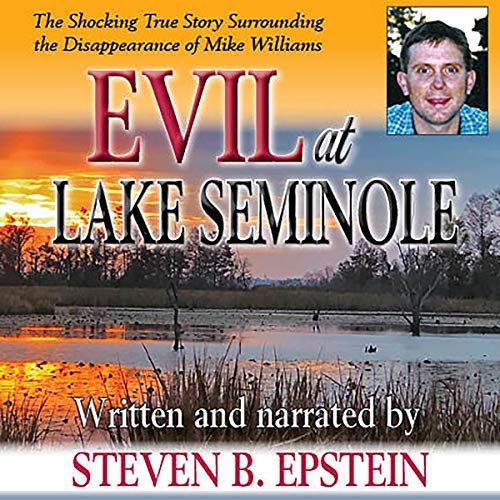 Did Mike accidentally drown in a Florida lake? Or was his disappearance the result of a sinister plot to kill him?

The crisp, predawn hours of December 16, 2000, began much as they had many Saturdays for avid duck hunter Mike Williams — on Lake Seminole, where he’d go to relax after a stressful work week. The Florida State grad was juggling fatherhood with a thriving real estate appraisal career. And that very evening? He and his high school sweetheart, Denise, planned to celebrate their sixth wedding anniversary.

When an intense search of the lake’s marshy waters turned up only his hunting boat and a camouflage hat, investigators reached the morbid conclusion he’d fallen overboard and drowned, his body eaten by alligators. Nearly two decades passed before the dark secrets hidden at Lake Seminole — and elsewhere — were finally revealed.

Evil at Lake Seminole is a diabolical tale of betrayal, greed, and deception — and of a courageous mother who devoted her life and savings to uncovering the truth of what really happened to her son.

What listeners say about Evil at Lake Seminole

Story was fine. I had heard of this case before. The narrator was awful. When he would switch back and forth between characters it was terrible.

True Crime is one of those odd genres, attempted by many but mastered by few. There is a nearly ubiquitous tendency to rely on gorey details and shocking revelations while skimping on quality writing and research. Fortunately for readers, Mr. Epstein seems to have the knack for writing a gripping but thoughtful book that does justice to the people described therein.

This book is Epstein's second, and at the beginning of the book, he explains his choice to wait on writing until he found a crime that inspired his investigation and writing, rather than jumping on the easiest or most accessible story. Aside from the basics -- Mike Williams, a young husband and father disappeared under very strange circumstances during a duck hunting excursion -- I wasn't at all sure what to expect. But the author's own passion for telling this story pulled me in.

The events unfold at an engaging pace, but not too quickly to develop and describe the "characters" (if that is the right word for real people in a story). Carefully selected details about the seasons, weather, geography, fauna, and flora all contribute to the feel of the environment where the events of the book took place. I admit to still having a slight case of the creeps from the description of the Hydrilla beneath the surface of Lake Seminole. As it turns out, the thick, grasping underwater plants are a pretty apt metaphor for the subtext and secrets surrounding the death of Mike Williams.

Reading this book, it is clear that the author has a real love of writing and true compassion for the victim and the many people whose lives he touched. The book will definitely keep your interest and keep you listening well into the night; but the respect and care with which it is written will remind the reader of the real people who loved, lost, and fought for the truth of this case.

The narrator has a very irritating narration style. His voice inflection and delivery, took me out of the story several times and it was difficult getting through the book , I’m sorry to say.
The story itself is fascinating, the details the author included were ok, I just would have liked more in particular areas. For example, the mom of Mike, after his disappearance, wrote an Ad in the local paper, explaining why she was thinking and what she knew about the case at that time. The author did not quote that ad, he brushed over it stating that she placed it, and also that it included what she knew and how she was feeling, so for him not to include it verbatim, left me wondering what she knew and her feelings at that time.
I think that when there is actual evidence in the form of writings from a person whom the author is including in the retelling, key documents such as that, would be essential to the story. Instead, the author paraphrases, when he could have given us her words verbatim.

Engrossing and In Depth

Lots of great details and information. In places it seemed repetitive but the narrative never got bogged down for long. I will definitely read more by this author. I hope he continues to do his own narration because he reads with honest conviction without sounding too strident.

My wife and I purchased the audiobook to listen to while on our cross country trip with our new travel trailer. We would find ourselves sitting in the truck at the nights camp spot after driving and listening for hours during the day. Eventually we'd get out of the truck and set up camp and hurry into the trailer to resume the book! Highly, highly recommend!! It's clear a tremendous amount of work went into putting this wild, true story together in a way that was easy to follow. Awesome job Steven!!

love true crime, but it has its limits (length)

I enjoyed the true crime novel and glad I listened to the audiobook rather than reading it. In my opinion the author could have condensed the book immensely. Fourteen hours, yikes! Many facts and statements were repeated OVER AND OVER AND OVER...

It’s a pity. The reader has an excellent voice and good intonation but his extremely slow pacing with sing song voicing seriously detracts from this powerful story.
His lilting tone is suitable for reading to preschoolers but most adults will be bored and irritated. He could improve with coaching to be sure because he has all the other elements required to be a good narrator. Notwithstanding his rendition, this is perhaps one of the best true crime stories ever written. I think many read true crime because of our yearning for justice in an increasingly chaotic and violent world. The heroine of this story turns out to be an unlikely character- an unfashionable and slightly eccentric pig tail sporting grandma whose resolute character and stalwart insistence to learn the true fate of her missing son pays off- a rare result in this day and age. This true crime book is well written and rates up there with the works of Jack Olsen (Predator) another true story where Justice would not have prevailed but for the intercession of a heroic journalist who refused to accept the simple yet wildly incorrect assumptions made by police and sloppy investigators.

A well written and informative book. Stephen. B. Epstein is a very good writer but unfortunately not a very good narrator. It was hard work listening to this book but the book itself kept me going where I would normally have pulled the plug. Stephen, let the professionals narrate it.

Another fantastic read by Steven B. Epstein.

After finishing Epstein's, Murder on Birchleaf Drive, I was excited to see he had a second book and jumped on it. I devoured this one over the course of two days and despite being vaguely familiar with the case, was astonished at what really happened. I appreciate Epstein's balance of observer, researcher and participant. I was especially impressed by the narration. I tend to be a little nervous when an author has chosen to do their own narration but Epstein delivers beautifully.

I almost think the audio is slowed down. At regular speed it’s painful, It doesn’t sound real. I sped it up to 1.2x and it made it so much better. Great story, A lot of it is about the court cases so if you are more into the hunt it might not be for you but it was an interesting book.