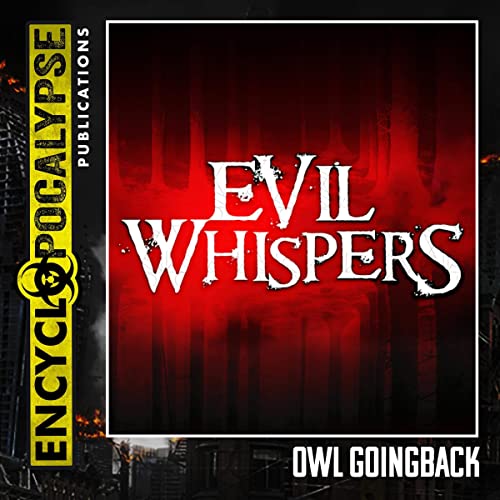 By: Owl Goingback
Narrated by: Cathi Colas
Try for £0.00

Robert and Janet Patterson and their young daughter, Krissy, went looking for the perfect getaway vacation spot. They found it in a backwoods Florida town. Far away from civilization. Quiet and peaceful. And terribly isolated.

What listeners say about Evil Whispers

this story is in my opinion emotive in ways that some horror stories aren't as I had to take a break from listening for about a week after certain events in the story hit me like a goods train to the gut as a whole the story is very well written the relationships are very well explored. the performance is very good I love the way the narrator did all the different voices.

I received this audiobook from Free Audiobook Codes for a review

The first Owl Goingback novel I have read but not the last. Starts of it sounds a bit clichéd but keep on and it just gets better, good characters in a well paced novel, with Cathi doing an excellent job with the narration. Recommended.
I received this audiobook from Free Audiobook Codes for a review.

A Great Slice of Horror

Robert and Janet Patterson think they’ve found the perfect location to get away from it all. Along with their young daughter Krissy, they intend for a lazy getaway from it all. A little bit of fishing, and a lot of lounging around will fill their coming weeks, if they get what they are looking for. But the best laid plan for any family can easily go awry, but it is especially ebay for things to go wrong when you choose the spot where Mansa DuPaul lived his final moments, assuming he stopped living at all.

The horror that followed them could have been avoided if they had listened to Krissy when she spoke of the whispers she heard in the forest that surrounded their holiday home. It all could have been avoided if Robert had listened to the strange Seminole man Jimmy when he was warned. But city slickers knew better than to listen to the wittering's of country folk, especially when the talk is of superstition and mumbo-jumbo.

But as Jimmy might have said, “To hear you have to listen.”


This is my first book by the intriguing named Owl Goingback, and I had no idea what to expect at all from the author. Initially I was drawn to the book by the cover art - I’m a sucker for nice cover art - and I’ve also been working my way through the books released by Encyclopocalypse Productions, mainly because the narrator Sean Duregger - a favourite of mine - does a lot of work for them. So this author, as well as the narrator, was entirely new to me.

Within a chapter I knew this book would be an easy read. There’s not a lot of fluff here, the style is simple and there are no word games going on in the text. It’s almost like reading a Young Adult novel from that perspective. Even if you’re not a big reader Owl Goingback would be an easy author to get into. As long as you are not easily rattled, that is.

The content of Evil Whispers is definitely not a family friendly affair, and I think there needs to be a warning to anyone tempted to read the book. Thankfully the bloodshed metered out in Evil Whispers is directed at the adults of the tale, rather than the children, but there were times I thought to myself that the people inhabiting the book went to extremely unsettling places in their minds.

The story itself was largely unremarkable, you’ve probably read something similar many times, but it is told well, and there is an underlying nastiness that keeps the reader on their toes. This isn’t to say that Owl Goingback is one of those “extreme horror” authors that have become popular recently, but rather he knows how to insert the belief that something horrible is nearing without needing to get too perverse with the text. The core of what makes this book different is not really the story, but the characters. This is the first time I have seen a voodoo inspired evil go up against a Native American good guy. The closest to this - of course - would be Graham Masterton’s The Manitou, so this puts Evil Whispers in - at least in my opinion - good company.


Not only was this my first from the author, but it was also my first from the narrator. Cathi Colas does an admirable job with some very difficult subjects. She manages multiple characters well, dealing with little Krissy in a way that seems - to me - very age appropriate, as well as managing the world-weary wisdom of Jimmy without strain. Both characters represent a very broad range. They are about as different as characters can be. Krissy is a naïve pre-teen who is written as perhaps a little young for her age, and Jimmy is a gruff contrarian who believes the world’s against him - and may well be correct. It’s no mean feat to be able to voice such characters, and the host of others besides, and manage to get them to blend in such a way that they both seem distinct, as well as fitting in the same world. It’s to her credit that I never thought of this until after the book was over and I sat to write this review.

I really enjoyed Evil Whispers. It has the general feel of an 80’s style supernatural horror, while having the twist of cultural clashes between protagonists. It was a quick and easy experience that basically provided everything that was promised.

This is one that I would have considered a good purchase, but I was lucky enough to have been provided a free copy of the audiobook from Encyclopocalypse Productions in exchange for a review. I’m particularly thankful for this opportunity. Not only is Owl Goingback a great find, but Cathi Colas should be considered an equal partner in the book’s success for me. Both have been promptly added to my “must find more from” category.

I've been impressed by Encyclopocalypse Publications and their many eclectic releases on audio. I'd not been familiar with this offer and was pleasantly surprised by this book. The Indian lore within is type of thing that's fascinated me since I was a kid and it just seems to go perfectly with the supernatural story. It drags just a !little in a few slots but the characters somewhat make up for that. Overall, a good read.

Some Things are Better Left Undisturbed

Mansa DuPaul reign of terror should have ended when he was killed and dismembered by Seminole Warriors for stealing and killing their children but it didn't it only festered in the dark swamp of Florida. Mansa was a very powerful voodoo practitioner and over a century later he gets a chance at resurrection after manipulating the young daughter of a vacationing family. Krissy unwittingly does his bidding because she is too young and immature to recognize true unadulterated evil.
Jimmy a Seminole man is the only one who truly understands what is going on as he is the one who helped keep the evil bound and defenseless. Mansa soon takes control of Krissy's mind and body and seeks control to bring forth his resurrection and reign of hell.
This old fashioned horror novel is not just about the supernatural but it also contains Indigenous beliefs as well as Christian beliefs about such things as possession and evil. This story is fast paced and well written with strong well developed characters and plot. I received this book for free upon my request but it has no bearing on this unbiased review that I am voluntarily leaving of my own volition.

Nothing like spending family time in nature. The Pattersons, with their young daughter Krissy, are visiting Blackwater Fish Camp with hiking trails, canoe trips on the river all surrounded by nature. Only rule is to stay away from Jimmy’s shack up the river a bit. He is a Seminole who is squatting on state land so just leave him alone.
Things are stirring under the swamp, luring an innocent girl away from her parents. They didn’t believe Krissy when she said she had an invisible friend to talk to. Will evil resurface in this tiny remote area?
This was my first Owl Goingback book and I really enjoyed it. It has all the elements of a perfect horror story.

EVIL WHISPERS was my very first Owl Goingback novel and certainly not my last. I consider myself pretty well read when it comes to horror authors of the past 20-30 years yet had somehow missed the treasure that is Owl Goingback. Thanks to Encyclopocalypse Publications for releasing this 2001 novel in 2022 in audiobook format so I could discover this hidden treasure.

Evil Whispers is my second, his third published, novel by Owl Goingback. I fear I slept on this man’s writing for far too long. Crota was good, but this was better. When reading I kept thinking how good a movie of this could be, the book itself kept me reading.

In Evil Whispers, Owl Goingback takes us to the backwoods swamps of Florida, where the Patterson family plans to enjoy a quiet vacation before they brave the commercial insanity of Walt Disney World for their daughter, Krissy. Unfortunately, that particular swath of swamp and woodland has a horrifying and blasphemous history that doesn't appear in the tourism materials.
Innocent, relaxing days of fishing and venturing onto the river in kayaks begin transforming into a disorienting nightmare as Krissy makes a new friend. It isn't long before this friend has the young girl performing seemingly random tasks, and soon there may not be anything left of Krissy.
As the terrifying past emerges from the swamp, the haunted history of the location comes to life, and it'll take everything the Pattersons have--along with the help of a reclusive Seminole named Jimmy--to have any chance of saving Krissy from a fate worse than death.
The pacing is fantastic, as Goingback weaves a tale that incorporates elements of indigenous spirituality, Haitian magic, and the love of family into a vibrant tapestry that is impossible to put down.
Cathi Colas provides excellent narration, fully separating the characters and providing each with their own distinct personalities.

I have been meaning to read this author for a long time so when I had a chance to pick up a free audio copy of this work, I jumped all over it.

I don't know when this was originally published but it had an old school horror feel to it. By old school I mean 80's or 90's. I enjoyed it even though it was a wee predictable in parts the writing was good enough to pull me through and I am glad it did.